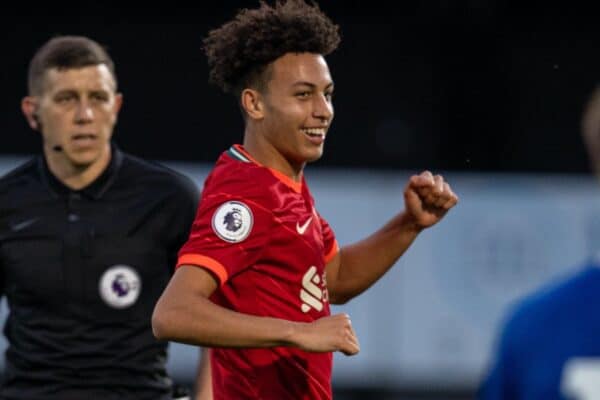 Sixteen-year-old duo Kaide Gordon and Bobby Clark were among those to make their mark as the Liverpool academy sides enjoyed another productive weekend.

Two days after completing his switch from Newcastle, Clark came off the bench to score for the under-18s, while Gordon followed up his goal in the under-23s’ Merseyside derby with an assist.

For Gordon, it was a second start of the campaign for Barry Lewtas‘ side as they hosted Brighton at Kirkby, with Sheyi Ojo also retained from the 3-1 win over Everton in midweek.

After a comprehensive showing in the derby, it was a more attritional contest against the Seagulls, who went ahead in the 20th minute through Evan Ferguson.

Brilliant work from Gordon, chasing down a loose ball, secured Liverpool their leveller before the half-hour mark, however, with the winger squaring for Jack Bearne to net in a 1-1 draw.

Owen Beck was among the standouts for the young Reds, with the Welshman building on a breakout pre-season as he settles into his role as the U23s’ first-choice left-back.

Brazilian goalkeeper Marcelo Pitaluga earned plaudits for a series of crucial saves, while 18-year-old James Norris – a natural left-back – filled in alongside Bearne and Tyler Morton in midfield.

The result means Liverpool are unbeaten after three games in , with a clash with senior opposition in Rochdale in the EFL Trophy to come on Tuesday night.

Meanwhile, an outbreak of COVID-19 in the Derby academy saw the U18s’ league fixture postponed, with a friendly against Watford hastily arranged in its place.

For the third game running, Marc Bridge-Wilkinson’s side netted five, and striker Oakley Cannonier got another brace to bring his tally to seven goals in three outings to start the campaign – though, of course, it remains five in two competitive games.

James Balagizi and Harvey Blair also got their names on the scoresheet, but most eye-catching was a goal off the bench for Clark, who swapped Tyneside for Merseyside on Thursday.

There are high hopes for the 16-year-old following his move – which came after face-to-face talks with Jurgen Klopp – and it was a confidence-boosting start for Clark at St George’s Park.

The U18s are not back in action until September 11, when they visit Nottingham Forest, but a host of Bridge-Wilkinson’s squad will be on international duty between now and then.

Cannonier, Mateusz Musialowski, Melkamu Frauendorf, Stefan Bajcetic and Harvey Davies are among those to have been called up.