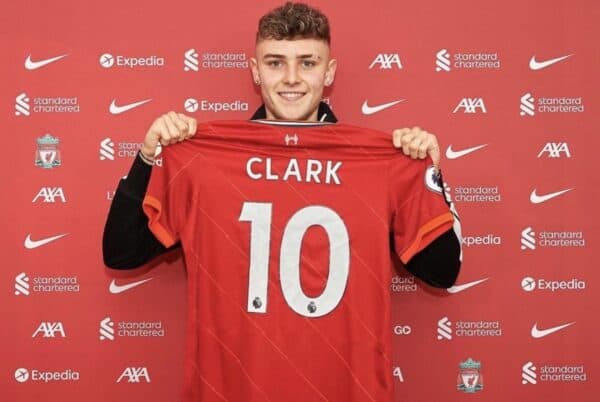 Liverpool have confirmed the signing of 16-year-old forward Bobby Clark from Newcastle, with the youngster completing a long-awaited move from St James’ Park.

The Reds have been in talks with Newcastle throughout the summer regarding a deal for Clark, son of former Magpies midfielder Lee Clark, who turned down the offer of a scholarship in the north-east.

A fee was agreed between the two clubs earlier this month, with the teenager visiting Kirkby to meet his new team-mates in the under-18s squad before the deal became official.

Liverpool have now announced the signing, with Clark expected to join Marc Bridge-Wilkinson’s U18s as a first-year scholar.

Clark is unable to sign a professional contract until he turns 17 in February, after which he will be able to put pen to paper on a three-year deal.

The youngster is a hugely exciting attacking talent who has represented England at under-16s level, and follows the likes of Harvey Elliott and Kaide Gordon as a high-potential signing from an English club.

The Reds will be hoping Clark can make swift progress through the ranks at Kirkby, though for now he will join up with an U18s side that includes James Balagizi, Melkamu Frauendorf and Oakley Cannonier.

Clark is the third notable youth signing the Reds have made this year, following Gordon and centre-back Stefan Bajcetic.

Bajcetic was the last overseas player brought in before post-Brexit rules came into force that prohibit clubs signing academy talents under the age of 18 from foreign sides.

Liverpool have shifted their focus as a result, with their priority now to bring in the best youngsters from throughout England, with Clark a prime example of this.