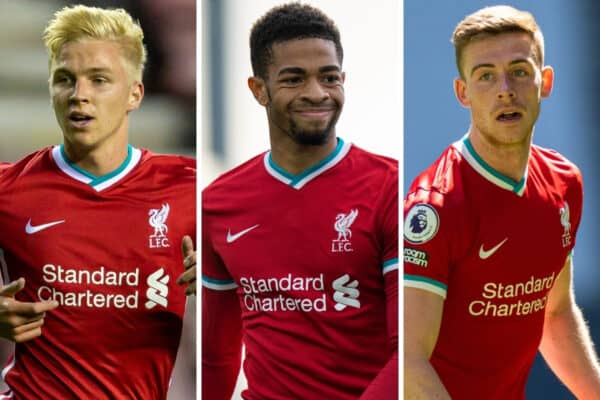 Liverpool are overseeing the annual shakeup in their academy ranks this summer, and at least five other youngsters could be expected to leave before the transfer deadline.

The transfer window is set to close in a fortnight, with the Premier League‘s deadline set for 11pm on August 31.

So far, Liverpool have been relatively quiet in terms of signings and sales, but there is increasing movement in recent days – particularly when it comes to loans.

Along with Ben Davies, youngsters Leighton Clarkson, Sepp van den Berg, Paul Glatzel, Adam Lewis and Jakub Ojrzynski have all moved on temporary deals, while Kamil Grabara and Liam Millar have been sold.

This has both prompted and been prompted by a need for change in the youth setup, with players stepping up from the under-18s and others being fast-tracked due to their involvement at senior level.

Sunday saw the under-23s begin their campaign with a 0-0 draw with Man City, with Mateusz Musialowski and Max Woltman making their debut for Barry Lewtas‘ side and James Norris, Dominic Corness, Luca Stephenson and Luke Chambers all involved from last season’s U18s.

The absence of some more experienced players could give an insight into the workings of the transfer market in the two weeks to come, while the return of others is another indication of deals in the offing.

Neither Morgan Boyes nor Luis Longstaff, both 20, were involved, with Billy Koumetio and Fidel O’Rourke starting in their place, and it would be no surprise to see the pair depart.

Tony Gallacher, 22, played the full 90 minutes, but with plans in place for Owen Beck and Conor Bradley, along with Norris, Chambers and Sean Wilson, it is hard to see the Scottish full-back a regular part of the side in the months ahead.

Midfielder Elijah Dixon-Bonner, 20, also started, and will have done so with a tinge of disappointment after a failed trial with League One side Portsmouth.

Both Dixon-Bonner and Gallacher – who was wanted by Sunderland – have seen proposed moves fall through already this summer, and will likely have been granted permission to find new clubs.

Finally, Jake Cain, 19, could follow his close friend Clarkson through the exit door on a temporary basis, with the goalscoring midfielder a loan possibility for clubs in League One and potentially the Championship.

There could even be further changes, though it seems versatile defender Tom Clayton, 20, will be staying until at least January as he wore the captain’s armband against City.