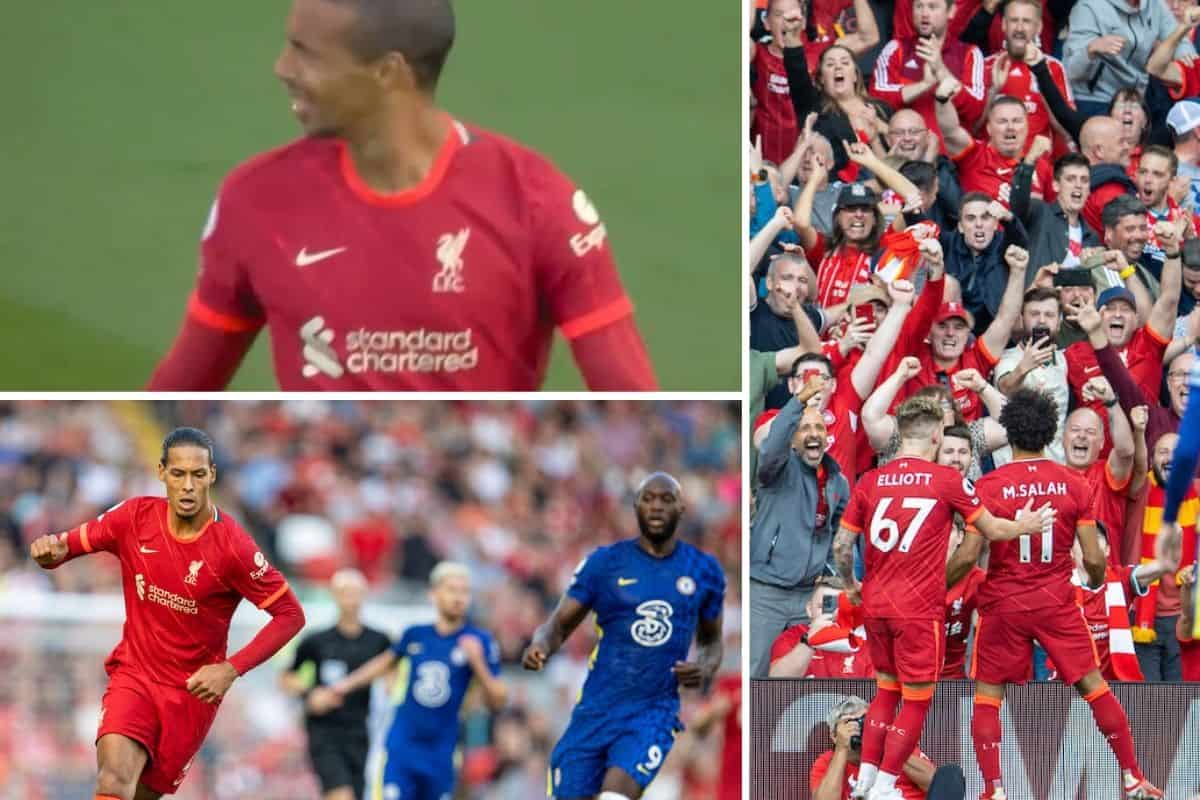 It was a case of a missed opportunity for Liverpool against Chelsea, but Virgil van Dijk and Joel Matip got Reds talking – as did the record-breaking Mohamed Salah.

Jurgen Klopp‘s side remain without a blemish in the loss column this season but there was a tinge of disappointment as the Reds were unable to break down a 10-man Chelsea unit.

They had 45 minutes to do so but couldn’t find a way to add to Mohamed Salah‘s opener from the penalty spot, with the Blues stubbornly ensuring Kai Havertz’s goal saw them walk with a point.

There were still positives to take from the encounter, but there was plenty to digest and talk about for fans after the game.

Out of context Matip 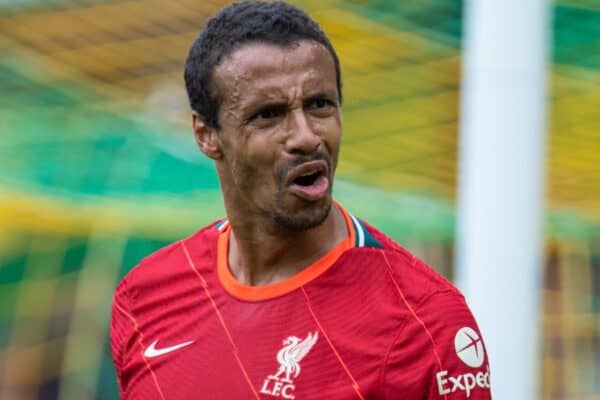 The man just keeps on giving.

The reaction to a free kick being awarded against him is pure, effortless and unintentionally brilliant, need we say more?

Virgil van Dijk will have a field day with Matip having already admitted the Dutchman is “normally one of the first who saw it and loves this stuff.” Easy to see why!

Where is the trust? 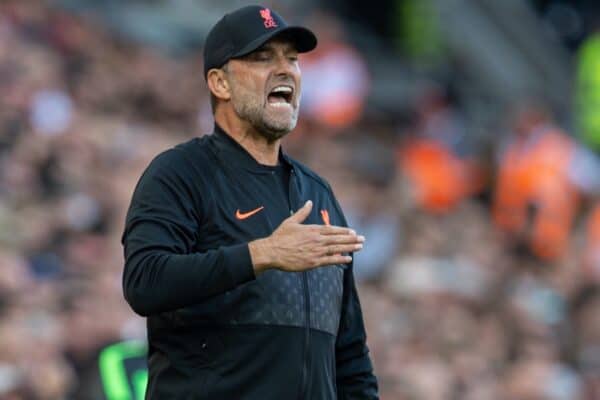 The Reds struggled to find a route to goal at Anfield and with the game still there for the taking, Klopp still did not look to Alex Oxlade-Chamberlain or Takumi Minamino – with Divock Origi not even on the bench.

There were chances, but they were frustratingly scuppered like Salah’s at the death.

The low block was problematic once more though and it left more questions than answers for Reds, some of whom want to see reinforcements before the close of the window:

You cant convince me Klopp ‘trusts’ his attacking options when he brought on zero of them against 10 men. It’s illogical

I've said this a couple of times. I really hope that Klopp will put more trust in the players on the bench this season. Taki should get some game time. Ox should play when fit. And I feel at some points he must start these guys for rotation purposes.

Feels like a disappointing result for Liverpool. Didn't do nearly enough with their advantage. Still not great against the low block, especially one as effective and wily as Chelsea's. A couple of anonymous performances in the final third. Chelsea very good defensively.

Thought we looked short of attacking options in the second half from the bench even though the squad was fully fit. Does Klopp trust Ox or Taki to changes things? Seems not #lfc

2 dropped. Could have done with that extra attacker off the bench. Could argue Jota didn’t do enough. Not Mane’s best day. 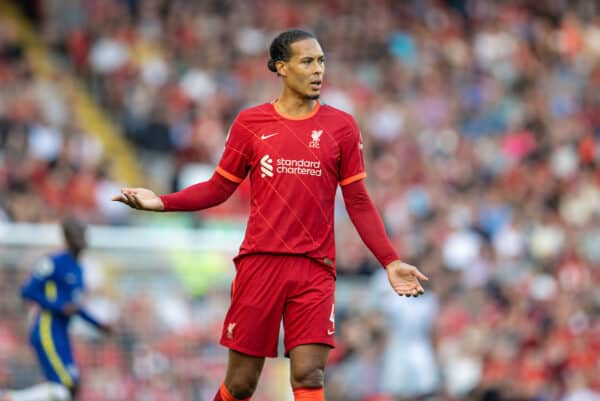 The Dutchman started the season under the cloud of his injury and questions pertaining to how close or far away he would be to the Van Dijk pre-injury.

But we have not needed long to find out the answer. And that is that he is just as imperious as he has always been.

The No. 4 calmly patrolled the backline and kept Romelu Lukaku at bay, with his stats from the day making for incredible reading:

The idea that van Dijk isn't still the best in the business is laughable. That's all. pic.twitter.com/Somr2CrlEw

And there were plenty of Reds sitting comfortably and bemused at the doubts that have been cast over Van Dijk recently:

How good was Van Dijk today too. Really thought it would take some time for him to get back to his best. Such an incredible player. Remember an agent telling me what a great player and character we had signed. So good to have him back

“Lukaku will be the litmus test for Van Dijk”:

Van dijk everytime lukaku gets on the ball pic.twitter.com/xJCvk5mIhv

Deadly from the spot 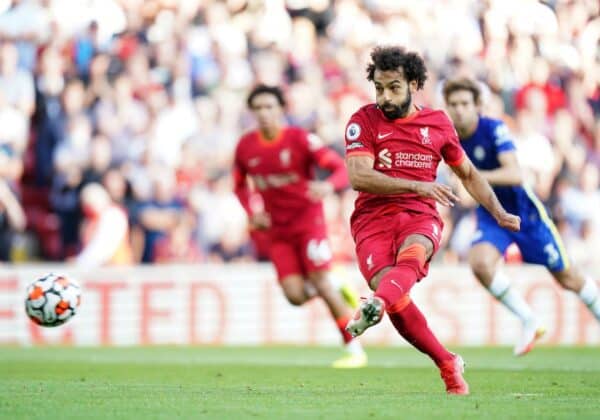 He’s given no reason for us to doubt him, but why do the nerves still appear when Salah is setting up for a penalty kick? Or is that just me?

The No. 11 kicks them hard and true and he has scored each of his last 14 Premier League penalties, talk about consistently deadly.

You know what is not talked about enough? The quality of Salah’s penalty taking. It’s up their with the very best. ??

Salah is such a clutch penalty taker man. His technique used to make me nervous early on but i had no doubt with that one.

A right-back he shall stay! 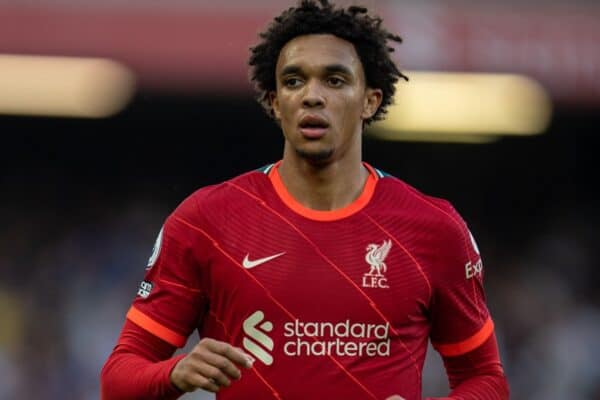 Trent Alexander-Arnold‘s bright start to the season continued on Saturday, with his passing range catching the eye once more, specifically from Gary Lineker who wants to see him in midfield.

The No. 66 was used in the middle of the park in his academy days but has carved out quite the career at right-back, and that’s where he should stay in the eye of Jamie Carragher.

No he shouldn’t, full backs get more of the ball than anyone & a bit more time on it to pick out their passes. The way Klopp sets up he’s virtually a midfielder in possession anyway. The amount of assists he gets means it would be mad to change his position. https://t.co/HXBRqbMg9h

We’re with Carra on this one!