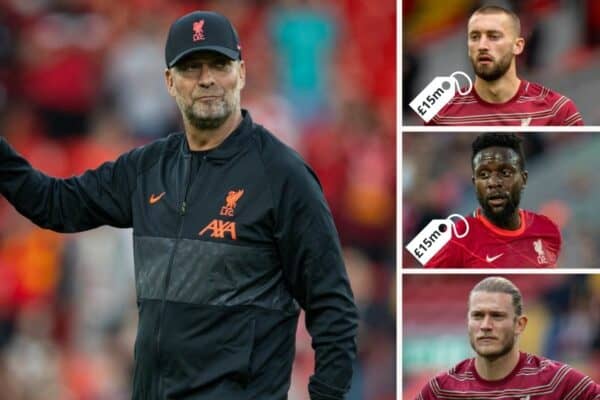 Liverpool ended the summer transfer window having made only one signing and with a number of fringe players still on the books. So why was that?

The winter window of 2021, when Ozan Kabak and Ben Davies were brought in as emergency centre-back cover in the final hours of trading, stands as an anomaly.

Prior to that, the most recent deadline-day signing at Anfield was Alex Oxlade-Chamberlain, who swapped Arsenal for Liverpool in a deal worth £35 million.

Even then, Oxlade-Chamberlain’s arrival was far from a surprise; gone are the days of frantic final flurries such as that which brought Andy Carroll and Luis Suarez through the Shankly Gates on the same day.

But such is the nature of the market that Michael Edwards, Julian Ward, Mike Gordon and, more frequently, director of loan management David Woodfine remain busy throughout deadline day.

A busy deadline day, but no signings?

Liverpool went into Tuesday with plenty to do in terms of outgoings, while supporters held onto faint hopes of a new addition in midfield, attack or both.

There were expectations of sales for Divock Origi, Nat Phillips, Loris Karius, Sheyi Ojo and perhaps Neco Williams, while the futures of Rhys Williams, Jake Cain, Tony Gallacher, Elijah Dixon-Bonner, Luis Longstaff and Morgan Boyes were to be resolved.

Twenty-three hours passed on a day kicked off by a new four-year contract for Jordan Henderson, and Origi, Phillips, Karius, Williams, Gallacher, Dixon-Bonner and Boyes remained on Merseyside.

Loans were finalised for Ojo, Williams, Cain and Longstaff, but there were no handshakes over permanent deals, either going in or out.

The transfer window ended, then, with Ibrahima Konate the only first-team signing and a third of the peripheral figures intending to be sold still on the books.

Top-flight leagues in Russia, Turkey and Mexico are still able to conduct business for the time being, which could present another avenue for players like Origi and Karius, but for all intents and purposes, the cut-off point has been and gone.

Jurgen Klopp will now push on with the players already at his disposal – and, outwardly at least, he will be happy to do so – while potentially not even registering a full allocation of senior players.

But until January at the earliest, many will ponder what could have been had one of the best squads in Europe been reinforced further.

There is certainly a question to be asked over whether Liverpool and those overseeing transfers made a rod for their own backs when it came to moving players on.

Given the round-the-clock coverage of the market, with a growing section of supporters seemingly more interested in signings and sales than performances on the pitch, the Reds’ efforts to shift their deadwood was widely publicised.

Journalists close to the club were able to provide updates on the futures of Xherdan Shaqiri, Harry Wilson, Marko Grujic and Taiwo Awoniyi, among others, aided by sources from further afield.

With that typically came reports of Liverpool’s valuations for those players, with price tags set to give interested parties a ball-park figure when negotiations began.

It is often the case that these are part of the process of maximising value during talks – for example, if Awoniyi is presented as available for £8 million, certain clubs would then be alerted to his availability.

However, from an outside perspective, the fact that these valuations were not met for any of the four senior players sold and deals failed to materialise for others suggests an issue.

In fact, Liverpool can be considered to have missed out on a total of £62.5 million on eight fringe figures this summer, when comparing their reported price tags to the fees brought in.

From those sold – namely Shaqiri, Wilson, Grujic and Awoniyi – it was Grujic who saw the biggest drop between the hopeful fee and that which Porto ultimately paid for him – from £20 million to £10.5 million.

And though it could be considered a coup that Wilson was sold for £12 million when he had just one year remaining on his contract, but there were hopes Fulham would pay £3 million more.

Meanwhile, it was seen as something of a success that the club were able to convince Lyon to more than double their initial bid for Shaqiri, but the £9.5 million secured was still lower than the minimum value of £13 million that fans were told he could bring in.

That may be the biggest problem: the proliferation of transfer news and the manner in which fans consume it creates unrealistic hopes – particularly when a ‘sell to buy’ approach is emphasised.

It is easy to gloss over the structure of certain deals, with sell-on clauses such as those agreed for Wilson, Grujic, Awoniyi, Kamil Grabara and Liam Millar possibly accounting for part of the price tag missed.

But if funds really were required from sales – and more realistically, players needing to be moved on before more bodies brought in – perhaps Liverpool set their prices too high?

Is it any wonder no buyers could be found at the fees required for Origi, Phillips, Williams or Ojo considering their performance levels over the past two years?

Origi is the prime example of this: a player whose stock could not have been higher at the end of the 2018/19 season, but having reverted to a level below that needed to challenge the likes of Sadio Mane and Mohamed Salah, can now neither be relied upon or cashed in on.

The decision to hand Origi a new five-year contract on the back of the Champions League triumph in 2019 remains one of the biggest, most sentimental failings of Edwards’ tenure as sporting director.

Now, Liverpool are unable to coax offers for the Belgian for even £10 million lower than the £22 million deal agreed with Wolves in 2018 when he had two years left on his previous contract.

That Origi turned down the move to Molineux was not the fault of those within the club’s hierarchy – and goals against Everton, Barcelona and Tottenham vindicated the No. 27’s decision – but the situation playing out now certainly is.

And while he enjoys a similar cult status among fans, it is hard not to draw parallels with the four-year deal handed to Phillips when none of Newcastle, Burnley, Brighton or Southampton stumped up £15 million before deadline day.

Phillips may be content with his role as fifth-choice centre-back, particularly given Joel Matip and Joe Gomez‘s injury history, but there is unlikely to be better time to capitalise on his profile than the window just gone.

So, the problem perpetuates: Liverpool retain a fragile underbelly to their otherwise world-class squad, as pricing out potential suitors appears to have sabotaged the ‘sell to buy’ outlook.

Whether that proves fatal remains to be seen, and thankfully Klopp is still confident of success on a number of fronts with the players he has.

But supporters are well within their rights to question the stance taken throughout the summer.