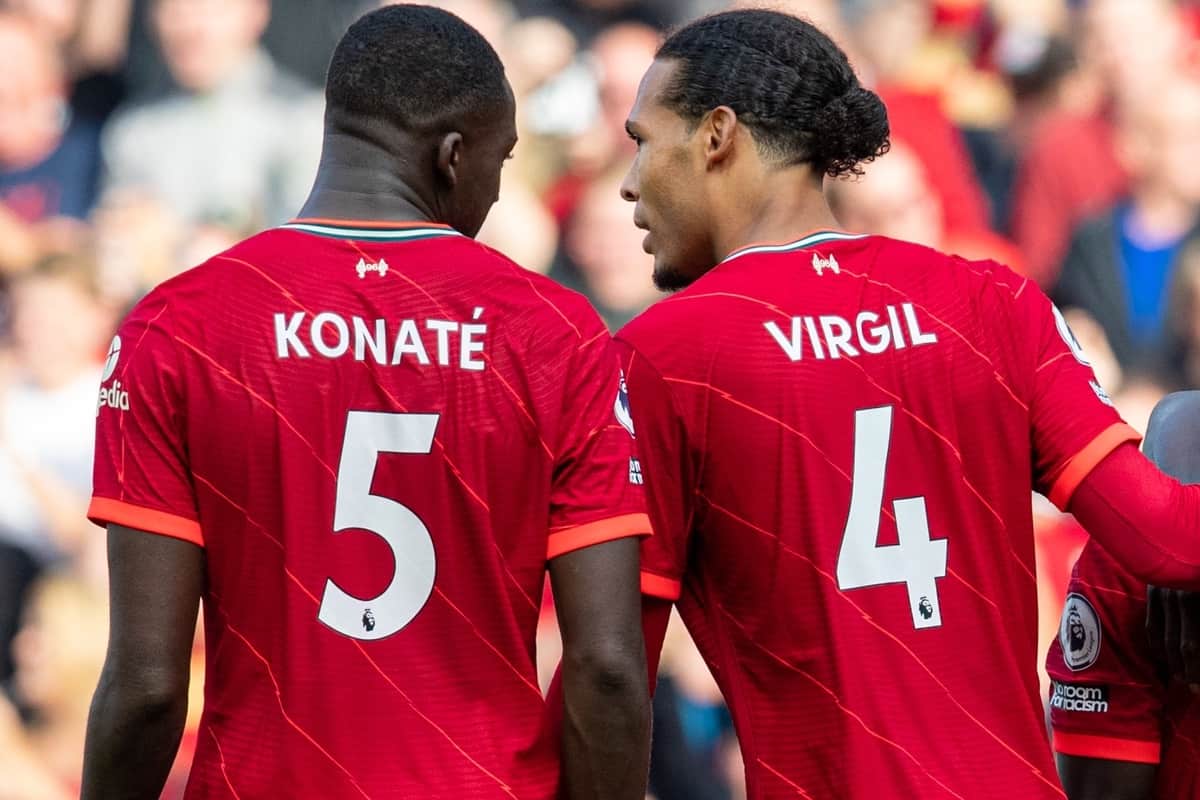 Ibrahima Konate has had a typically low-key and slow introduction into the Liverpool team, as most tend to have under Jurgen Klopp – but he’s aiming very high all the same.

The only senior signing this summer, Konate moved from RB Leipzig with a big reputation and a somewhat lowered pricetag due to a release clause.

Expectations are high that he’ll prove an invaluable addition to the squad over the long term, though he’ll have to be patient at the start of his Reds career with four fit centre-backs, and a fifth in Nat Phillips, all vying for regular game time.

One of those is a guaranteed starter whenever fit, in our giant Dutch international captain Virgil van Dijk, a player Konate rates as the pinnacle of the position in the game and the level he aspires to reach.

Asked whether there can be comparisons between the two, Konate rightly pointed out to Sky Sports that consistency season after season is a huge factor.

“No, I think I cannot compare with Virgil. He has shown to the world he’s the best defender in the world, me not. I hope with time I can show this. Of course [that’s the ambition],” he said.

It’s a fair point to make, given Konate is just 22 years old and has played twice for the Reds, compared to Van Dijk being 30 and a Champions League and Premier League winner with the Reds.

Both of those trophies are targets for the current campaign though, and while Konate is not looking too far ahead, he sees no reason to aim for the stars in his debut season at Anfield. 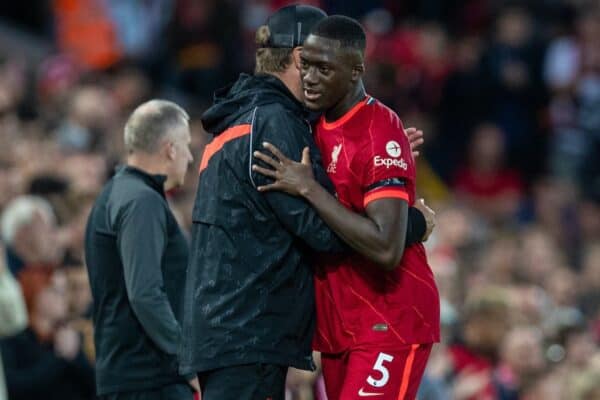 “Now I think we have to focus game by game. We have Champions League and a lot of games, but with this team we can do big things this season,” he added.

“This [winning the domestic and European double] is not easy! But if we can, why not?”

On a more personal level, Konate separately discussed settling in on Merseyside with the club website.

He’s keen to point out his appreciation toward both his team-mates and his new home – and revealed who is helping his settle in fastest.

“Every player helped me in this team when I came the first day, to be like at my home. This was very important for a new player and for me.

“Now, I think every player can see this on the pitch: I am very happy to be with every player. This is good and I hope this will continue in the future.

“[I’m maybe closest to] Sadio, Naby and Div Origi, because they speak French and it’s easier to speak with them. They helped me very well when I arrived at the club.

“Of course, I cannot stay at home. I am in a new city and I need to know how the city is where I am. I love the city. I was in the city centre.

Konate may well come out of the side at the weekend as Van Djik and perhaps Joel Matip return to duty, but a gradual easing in under Klopp, before becoming a regular and impressive starter, is a trait we’ve seen over and over with the likes of Andy Robertson and Fabinho.

Months down the line, Konate will hope to be following a similar path, and the early signs are certainly promising.