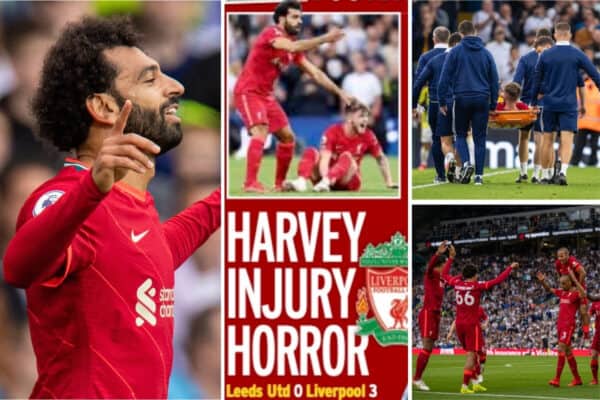 Liverpool may have cruised to a 3-0 victory over Leeds on Sunday, but many journalists focused on the injury to Harvey Elliott and its impact on the match.

The Reds were superb at Elland Road, outplaying their opponents and showing they are very much Premier League title contenders.

Mohamed Salah put Liverpool 1-0 up from Trent Alexander-Arnold‘s precise cross, before Fabinho doubled his side’s advantage in the second half.

The shot-happy but off-target Sadio Mane completed the scoring late in the day, but Elliott had sadly suffered a dislocated ankle by that point and that overshadowed the result.

Here’s how the media reacted to the game.

Elliott’s shocking injury was the focus for many…

The Telegraph‘s Jason Burt had a huge amount of sympathy for Elliott:

“A horrible-looking injury to any player is sad enough but when it happens to an 18-year-old who has made such an uplifting impact on the Premier League it feels even more shocking.

“The distress surrounding Harvey Elliott after he was caught late and landed awkwardly on his ankle midway through the second-half was obvious with Mohamed Salah screaming to the bench, Jurgen Klopp quickly on the pitch and medics and stretcher-bearers soon following.

“Elliott was eventually carried off but was able to clap the fans. The incident overshadowed what was an impressive victory for Liverpool, who are unbeaten and only off the top of the table on goals scored.”

This is Anfield felt it was also important to focus on another good performance from Elliott, prior to the incident:

“What more to say about this kid? Evading challenges, clever through balls, defensive work rate and no fear at taking on the shot or the defender.

“Harvey Elliott has so quickly earned Jurgen Klopp‘s trust, and a shirt in midfield, that he can already be thought of as a regular first-team player.

“A couple of right-footed shots didn’t quite trouble the goalkeeper and maybe belied his youthfulness as much as his fearlessness – one in particular would have been better-served passing wide – but it’s more important at this stage for him to be capable of expressing himself and attacking with a surprise element.

“Sadly, that looks to be all over for now – a bad-looking injury ended his afternoon all of a minute before he was due to be subbed. Hopefully, his recovery is swift and straightforward.”

The Mirror‘s Chris Doyle bemoaned the injury, especially at a time when Elliott has forced his way into Klopp’s plans:

“It remains to be seen how long he will be on the sidelines for but if it’s as serious as it looked, it’s a huge blow for the player and the club.

“Elliott has been integrated into the first team this season and has looked promising when he’s been used by Klopp.

“And he was having an excellent game once again before being forced off with the horror injury.”

The Mail‘s Dominic King rued an awful moment on an otherwise excellent day at the office for Liverpool:

“It had been one of those afternoons when everything had pretty much gone as Jurgen Klopp would have hoped and planned.

“Liverpool had been so dominant, so overwhelmingly authoritative at Elland Road, that Klopp had even been able to laugh with Andy Madley, the fourth official, when VAR deemed that Sadio Mane had not fouled when the German felt he was due a penalty early in the second half.

“As Liverpool’s manager headed for home, though, there was no appetite for smiling or laughter. Results quickly become insignificant when a serious injury is involved and the one which Harvey Elliott sustained an hour into this contest was severe enough to bring in darkness.”

Goal‘s Neil Jones rightly stated that Elliott’s health is all that matters, sending his own well-wishes to the midfielder:

“Elliott’s misfortune changed the mood, understandably, though Liverpool to their credit kept pushing until the end.

“Mane eventually got the goal his industry merited, smashing home in stoppage time after good work from Henderson and the excellent Thiago Alcantara. Liverpool finished the game having had 30 shots at goal, their three-goal margin feeling almost insufficient, given their dominance.

“Not that it will concern Klopp. Nothing about the game will, right now. His mind will be on Elliott, and understandably so. It really can be a cruel game, sometimes.

“Get well soon, kid. Your star will shine bright again soon, for sure.”

A fantastic performance didn’t go unnoticed, with many seeing it as a statement victory…

Burt feels this is the Liverpool of old on show, rather than the pale imitation last season:

“Big statements have been made by all of their title rivals but this is the biggest pronouncement so far from Liverpool: they have their team back while Salah made a declaration of his own by scoring his 100th Premier League goal.

“Manchester City spent £100 million on Jack Grealish, Chelsea close to that on Romelu Lukaku and Manchester United have brought Cristiano Ronaldo back. For Liverpool it has been the return of long-term absentees such as Van Dijk that has made the difference. They believe again.”

King was hugely impressed by what he saw at Elland Road:

“The outstanding level of the performance must be acknowledged. Liverpool, individually and collectively, were brilliant.

“Liverpool aren’t being afforded the platitudes that are being bestowed on some of their rivals but it would be a serious error to suggest this team that isn’t equipped to go the distance; they treated Leeds with contempt for the rest of the first half and, really, should have ended the contest.”

The Liverpool Echo‘s Paul Gorst was another who hailed the display:

“The Reds ran riot for the most part as they put their hosts Leeds United to the sword with a classy and supremely professional display in deepest Yorkshire.

“Liverpool march on, with 10 points from 12 leaving them level at the summit alongside Manchester United and Chelsea and they are kept off top spot by goals scored only.

“The Reds have got no money, but we’ll still win the league,” sang a jubilant away crowd at full time.

“There may yet be some real truth behind that particular jest.”

Doyle feels Salah deserves to be considered among the very best players:

“It’s been a sensational start to the season for Salah and that continued at Elland Road as he opened the scoring for the visitors.

“And he made it 100 Premier League goals in doing so – an unbelievable feat. The Egyptian winger’s consistency is exceptional and his greatness is often underappreciated, but it shouldn’t be.

“He’s up there with the best of them and today was another example of that.”

The Independent‘s Richard Jolly pointed out the legendary names Salah is now in the same company as:

“The onlooking Robbie Fowler no doubt admired the predatory finish, but perhaps it was fitting that Salah’s milestone goal was created by a Liverpool full-back.

“It meant his ton of top-flight goals in England – how Chelsea must wish that more than two were scored in their colours – came in just 162 games. Only Alan Shearer, Harry Kane, Sergio Aguero and Thierry Henry have brought up a century quicker.”

Sarah Rendell of the Independent heaped praise on the Liverpool superstar, singling him out as the Reds’ star man:

“Mo Salah was everywhere for Liverpool in the opening 10 minutes, even managing to throw off Kalvin Phillips.

“He put Diogo Jota in for a great chance at 14 minutes, with keeper Illan Meslier having to make a great save to stop the Reds from scoring. Salah kept pushing for an opener and it came in the 20th minute, his 100th Premier League goal – 98 for the Reds, two for Chelsea – thanks to a clean pass from Trent Alexander-Arnold.

“The Egyptian international attracted transfer rumours in the summer and the Reds will need to stave off future offers as he is pulling all the strings at the moment.”

Jones was quick to point out that Salah is every bit as key to the superstar signings made by Liverpool’s rivals this summer:

“Salah, as usual, gave the Reds the lead in the first half. Another slice of history for the Egyptian, who becomes the 30th member of the Premier League’s 100-goal club, achieving his century in just 162 games.

“Only Alan Shearer, Harry Kane, Thierry Henry and Sergio Aguero got there quicker; a reminder, in a weekend dominated by Cristiano Ronaldo and Romelu Lukaku, that Liverpool have their own superstar, and that he is as hungry and as deadly as ever.

“Salah was outstanding, as were Liverpool.”