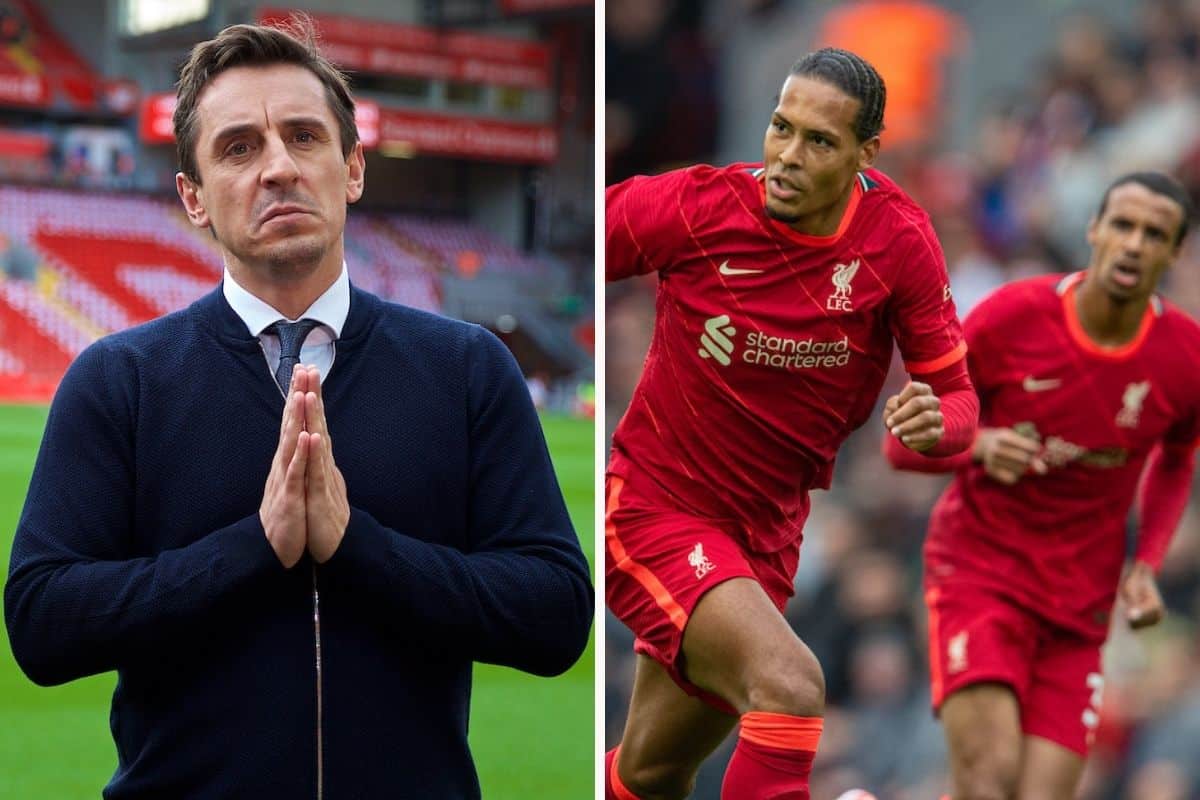 Gary Neville’s comments about Jurgen Klopp and that “something’s not right” at Liverpool has been met with raised eyebrows by some supporters.

Klopp was not wrong when he said “Neville has an opinion on absolutely everything” and the manager is the subject of his musings once more following a quiet transfer window.

It’s no secret that fans had hoped to see greater investment in the squad, but it did not eventuate and Liverpool will push on with what they have in their pursuit of silverware.

Liverpool are unbeaten in their last 13 games in the league and have started this season as strong as one could hope, but there is seemingly something “missing”, something that will not see Liverpool finish above Man United so says Neville.

“I was at the game on Saturday, Liverpool vs. Chelsea, and I said after the game – sometimes you can’t put your finger on it [but] something’s not right,” told the Webby & O’Neill Youtube channel.

“Not bad. There’s no massive spirit issue, or the manager falling out with players. Nothing like that. But there is something just missing.

“I remember going three years ago and thinking ‘[United] are in trouble’. Two years ago thinking, ‘we are in serious trouble’.

“[Jurgen Klopp’s] not got that money [to improve the side]. He’s having to deal with a team who are a good team, but look like the team that needed a boost.

“There are no massive problems at Liverpool. I’m not saying it is broken. Not by any stretch of the imagination.

It’s a little too early for that prediction, don’t you think? Especially when you consider Neville said Man United will “probably win the league before Liverpool” before the 2019/20 season.

For many, it’s just a case of stirring the pot and trying to unsettle the mood around Liverpool:

Gary Neville: "Klopp doesn't seem himself at the moment. In interviews he [was] just a joy. He is a little bit narked by something. Something is bugging him."

Is it me or does it feel like Neville's constantly trying to disrupt the mood around Liverpool? He's a massive snide.

Gary Neville started out as a very good pundit. If Liverpool had stayed in their lane (in his mind) then he would have stayed that way. Our success has rattled him and he's constantly talking about us, trying to cause division and upheaval.

Gary Neville chatting wham about Liverpool. Loving Utd again now isn’t he after him crying over the super cup and how much he was let down. Up the skint reds ???

Whenever Neville says something about Liverpool the opposite happens.

Gary Neville talks about Liverpool more than he does his own club. It’s weird.

Ok, now I feel lot better about Liverpool. If Neville says we are bad we're heading in the right direction.

This is the guy who said United will win the league before Liverpool, in 2019 of all years,?.

I admire Gary Neville trying to create problems at Liverpool that aren’t there https://t.co/FSpOQNCAiQ

Unlike some of our fans, Gary Neville is genuinely worried about Liverpool this season. That’s why he’s out here gobbing off about us again. He doesn’t want to face the humiliation of seeing United spend over £100m and still finish behind us.

Neville can allow Liverpool to consume his thoughts but it’s a little premature to be casting shadows over a team who have helped set the standards in the league over the last few seasons.