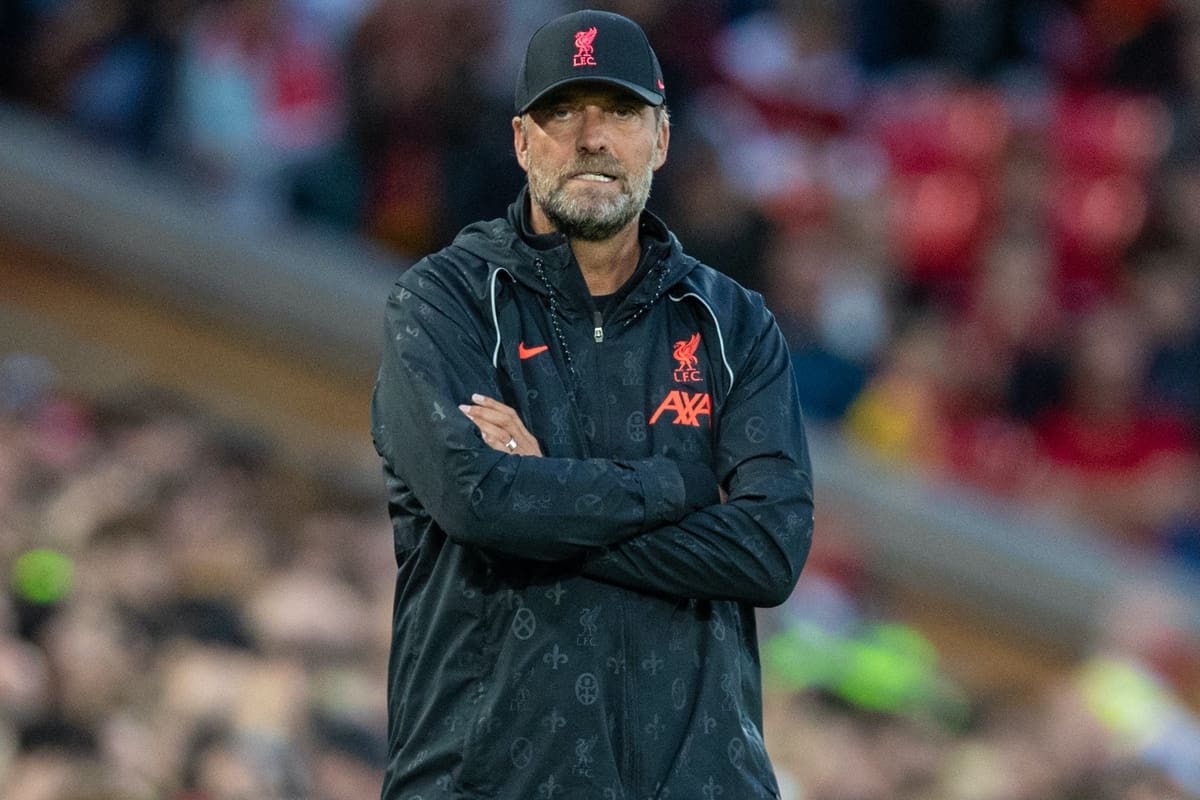 Is the glass half full or half empty? In the world of football fans online it’s often undoubtedly half empty.

The transfer window closed without so much of a peep from Liverpool in regards to new players walking through the door, with new contracts once again the order of the day.

The early signing of Ibrahima Konate was what many hoped would be a strong start to the summer, but it would prove to be both the start and the end of any business the club would conduct.

Naturally, the online discourse centred around the lack of signings and what it means for Liverpool’s squad depth for the upcoming season where silverware has to be the objective.

A midfielder and forward were the priority for many, but they failed to materialise and it left fans with a lot to get off their chests.

So, in summary, squad is short two players: a midfielder and a striker. Not necessarily starters but what I call bridges: could do a job today but are there to learn how team works to be great tomorrow. Which, come to think of it, is what I wanted club to tackle in first place!

I think Liverpool went into this transfer window with three areas to strengthen and only one has been addressed. We needed a centre-back and we signed Konate. I still think this squad lacks a backup RB and RW. These are arguably two of the most important roles in the system.

Not going full “FSG have blood on their hands” because there is no blood.

The truth is, Klopp and this squad are capable of challenging.

But there’s zero buffer. None. Every last thing has to go right.

And for what they’ve done, Jürgen and his players deserve better.

Arguably, Liverpool’s lack of signing an attacking player this summer can be attributed to one of the most emotional decisions the club has made in recent times: Divock Origi’s new contract in 2019. It was utterly bizarre, against all the other smart business done, now hamstrung.

My take on #LFC ‘s business this window?

Extensions for the spine make sense but the job’s *not* finished until Salah signs on.

On the lack of transfers? The club’s taking unnecessary risks & has failed to equip Klopp with the best possible resources to establish a dynasty.

My big fear is when Klopp finally leaves Liverpool, despite his brilliance we’re still on 19 & 6, bemoaning the fact we had one of the great managers & such a talented XI, but never gave him the squad to establish a dynasty. He’s worked miracles with one hand tied behind his back

Liverpool have decided to run it back, banking on the injuries and sheer *waves arms* of 20/21 to be evened out by it being a 99-point title-winning squad plus Jota/Thiago/Tsimikas/Elliott/Konaté (and minus Gini/Lovren). I think I get it but not sure it’s enough. Attack is light.

Liverpool will always challenge for the major honours with the players in the starting 11 however I’m slightly disappointed not to see us add at least another attacker into the squad.. just feel like another season with a few injuries and we could de rail in the title race

There was a sense that something isn’t quite right…

Liverpool there with a nett spend of just £10m more than Burnley and £20m more than Man Utd's U18s since winning the Champions League. pic.twitter.com/CII4lNQNlC

Liverpool have stopped making smart decisions. Doesn't bode well for the future. You can't complain about too many bodies and high wages and then give 4 year deals to injury prone players. Mental.

FSG have done a lot of good. Put in place Edwards & the structure we have, expanded Anfield & the best of course bringing in Klopp.

I don't want them out, BUT, they have not backed the best coach in the world in two windows now. Something isn't right. Klopp is hamstrung #LFC

Excited by the prospect of ending this transfer window weaker than we started it. Really motivational.

But some did look for the positives after deadline day…

This is the biggest and best squad Jurgen Klopp has ever been in charge of. Certainly the most expensive. If he, an actual decorated expert, the best manager the club could possibly have, says he is alright with it, it's probably worth taking his word for it.

From our CL and PL winning squad we have basically replaced Lovren, Lallana, Wijnaldum and Shaq with Konate, Thiago, Elliott, Jones, Tsimkas and Jota. Thats pretty much a rebuild lads.

Right! Now that the madness is over we have one job to do and that is to support our football club. We have a more than competitive squad to win the Premier, the CL and compete in the Cups. Up the Reds and on to the promised land. #YNWA @LFC.

I'm really frustrated with our inactivity, but there are positives from the window. We've signed a CB who should go on to be world-class and we've banked decent money for players like Grujic & Wilson. It's also pretty significant that City didn't get Kane or an elite no.9.

Whilst I have massive faith in Liverpool’s current squad, I think we could’ve done with an extra attacker.

It seems strange we didn’t bring in an extra body but… up the reds! ??