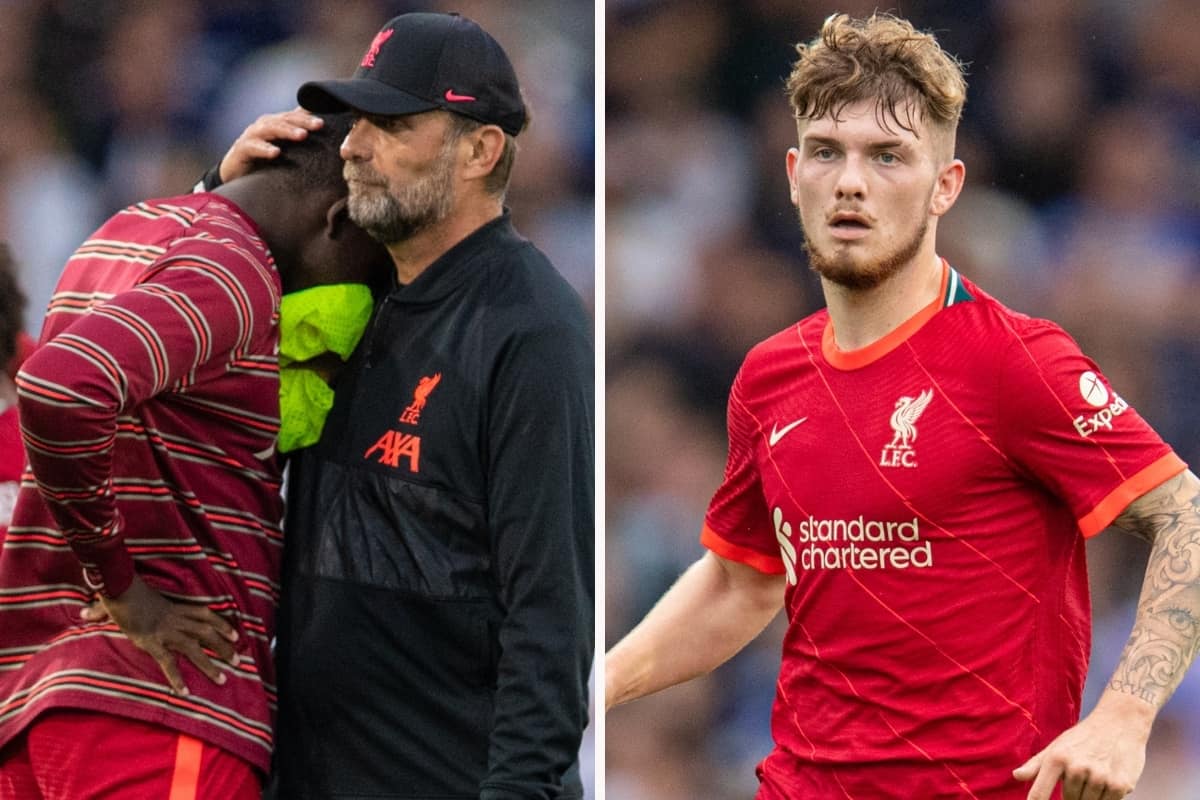 Harvey Elliott‘s shocking ankle injury in the 3-0 win at Leeds left the Liverpool squad stunned, and afterwards the 18-year-old’s team-mates wished him a swift recovery.

Goals from Mohamed Salah, Fabinho and Sadio Mane earned the Reds a big victory at Elland Road, which kept up the pace at the top of the Premier League.

But an awkward tackle from Pascal Struijk on the hour mark left Elliott writhing in pain and Salah urgently calling for medical assistance, with the midfielder then stretchered off.

Elliott provided a positive update on his way to hospital, but speaking after the win, Jurgen Klopp accepted that it was a “bad injury,” revealing his No. 67 had suffered a dislocated ankle.

The severity of Elliott’s injury is unclear at this stage, and the hope is that it is not as bad as initially feared, but either way, it is a blow to both player and club.

It is certainly not the first serious injury Liverpool have suffered in recent seasons, and the squad quickly gathered to deliver a straightforward message to Elliott on social media: “We are all with you.”

Great result and performance against a tough side. However it was horrible to see Harvey pick up an injury like that…. Thoughts are with him and I know he will have all the support he needs to come back even stronger! We are all here for you mate! ?? pic.twitter.com/TdWtLh4WaK

Proud of the team today. 3 points, 3 goals and a clean sheet at a tough place to come away from home. The club, the players, the fans – they all had my back and we will all have your back too Harvey! You will come back stronger ?? pic.twitter.com/dZHoo4PNwm

Nothing else matters in this moment. Thinking of you little bro???? pic.twitter.com/xAlYmD4URa

Together! We are all here for you, Harvey. #YNWA @LFC pic.twitter.com/xVHIYSFyOZ

Strong & Positive mentality. You Will be back soon amigo! #YNWA https://t.co/KrJ4Zp5ix9

Curtis Jones and Neco Williams are two players who are particularly close to Elliott, and the midfielder wished all the best to his “lil bro”:

It was not only the Liverpool squad who paid tribute to the teenager following the scenes at Elland Road, with Marcus Rashford and Raheem Sterling among those to put “rivalry aside”:

Ahhhh man rivalry aside that looks really nasty, no one wants to see that, thoughts are with you Harvey @LFC

Hope this is not as serious an injury to Harvey Elliott as it appears. Didn’t look a bad challenge or a red card in normal speed, but without replays it’s hard to be sure. Just a freak accident, I reckon.

Can't believe it !! All the best Harvey Elliott, you'll be back very soon even stronger.#YNWA

No professional player should or would celebrate an injury to a rival, but it is warming to see the tributes flood in for Elliott after a major setback.

The youngster has made a promising start to life in the Liverpool first team, with Sunday bringing his third Premier League start, and hopefully he can recover fully and continue his rise to prominence at Anfield.