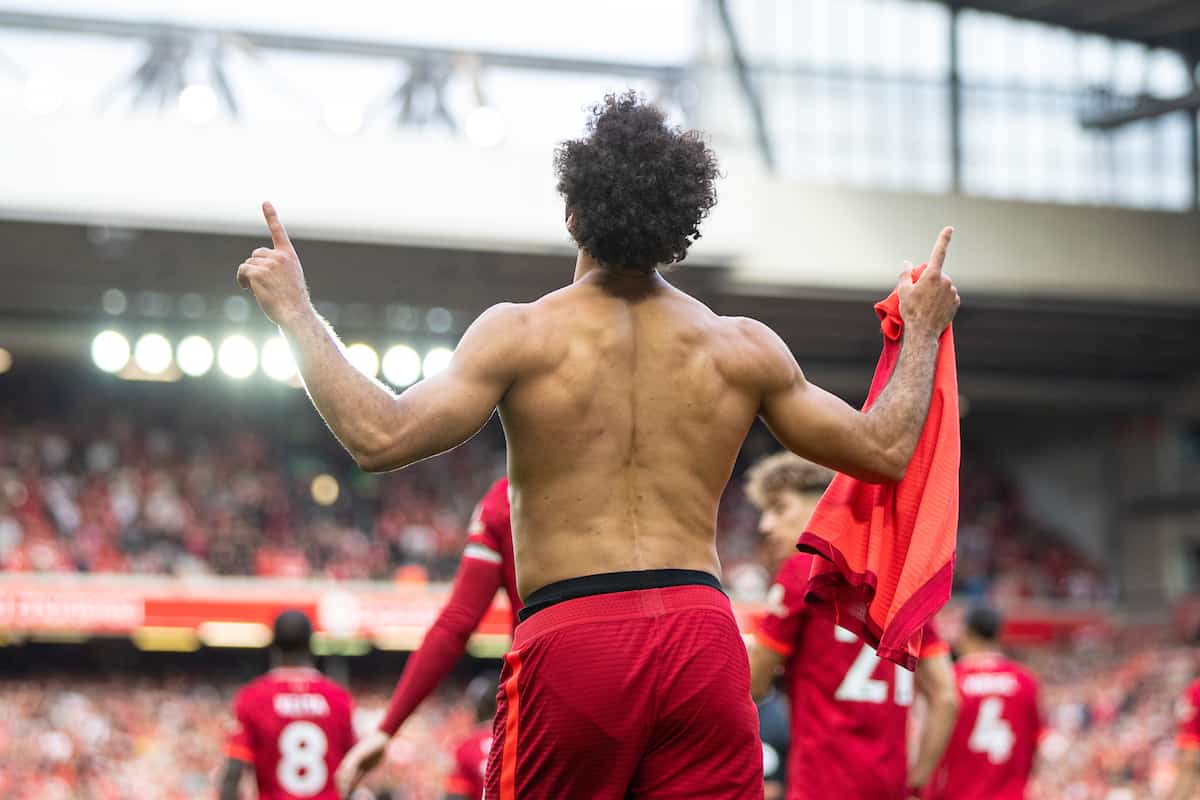 Mohamed Salah paid tribute to the Liverpool fans after breaking into the club’s top 10 all-time goalscorers list, while James Milner joked about his late call into the lineup.

Salah scored his 130th goal for the Reds in Saturday’s 3-0 victory over Crystal Palace, overtaking Sam Raybould to become the Reds’ 10th-highest scorer of all time.

It is a remarkable achievement for the 29-year-old – the only non-British player in the top 10 – and underlines his importance to Jurgen Klopp‘s side.

Over the weekend, Salah’s former team-mate, Micah Richards, explained how the forward would discuss his desire to play for Liverpool during their time together at Fiorentina, suggesting he should end his career at Anfield if possible.

And as talks continue over a contract extension, the No. 11 has acknowledged supporters for their role in his incredible form:

You, the fans, keep me going. You give me more strength than I think you’ll ever know. pic.twitter.com/HgNx8YbTtS

The hope is that Salah will sign a new long-term deal with Liverpool that could see him move ahead of the likes of Kenny Dalglish, Robbie Fowler and Steven Gerrard into the top five.

It could be one of the most important decisions in the club’s recent history, with the Egyptian poised to cement himself as a legendary figure.

His latest goal came in a convincing win over a Palace side who threatened throughout, with Klopp having made six changes to his lineup from the midweek victory over AC Milan.

Milner was among the players to come in, but unlike Virgil van Dijk, Kostas Tsimikas, Ibrahima Konate, Thiago and Sadio Mane, his involvement was not pre-planned.

The veteran started, and impressed, at right-back after Trent Alexander-Arnold pulled out due to illness on Saturday morning, with Milner joking in an interview with LFCTV that the No. 66 had a bout of “Zaha-itis”:

“Trent’s definitely going to get some ribbing for that. A bit of Zaha-itis or something like that!

“It was probably two, three hours before the game, really, [when I found out].

“But that’s what we’re prepared for, that’s why we train as a team together. The training is done so anyone’s ready at any time.

Taking to social media after the game, the Liverpool squad revelled in another three points, while Van Dijk and Jordan Henderson marked career milestones:

Very proud to captain this club for the 200th time today and even sweeter to get the 3 points! #YNWA pic.twitter.com/q7pu0I0MKQ

Nice to get the clean sheet and a good win to keep the momentum going ? #100clubsadio#whatagoalnabylad #YNWA pic.twitter.com/zdF5NiiwYH

After six changes on Saturday, Klopp is expected to make more for Tuesday night’s trip to Carrow Road, to take on Norwich in the third round of the League Cup.

It could be, even, that none of those who started against Palace are retained for that clash, with freshness required throughout a busy run for Liverpool.