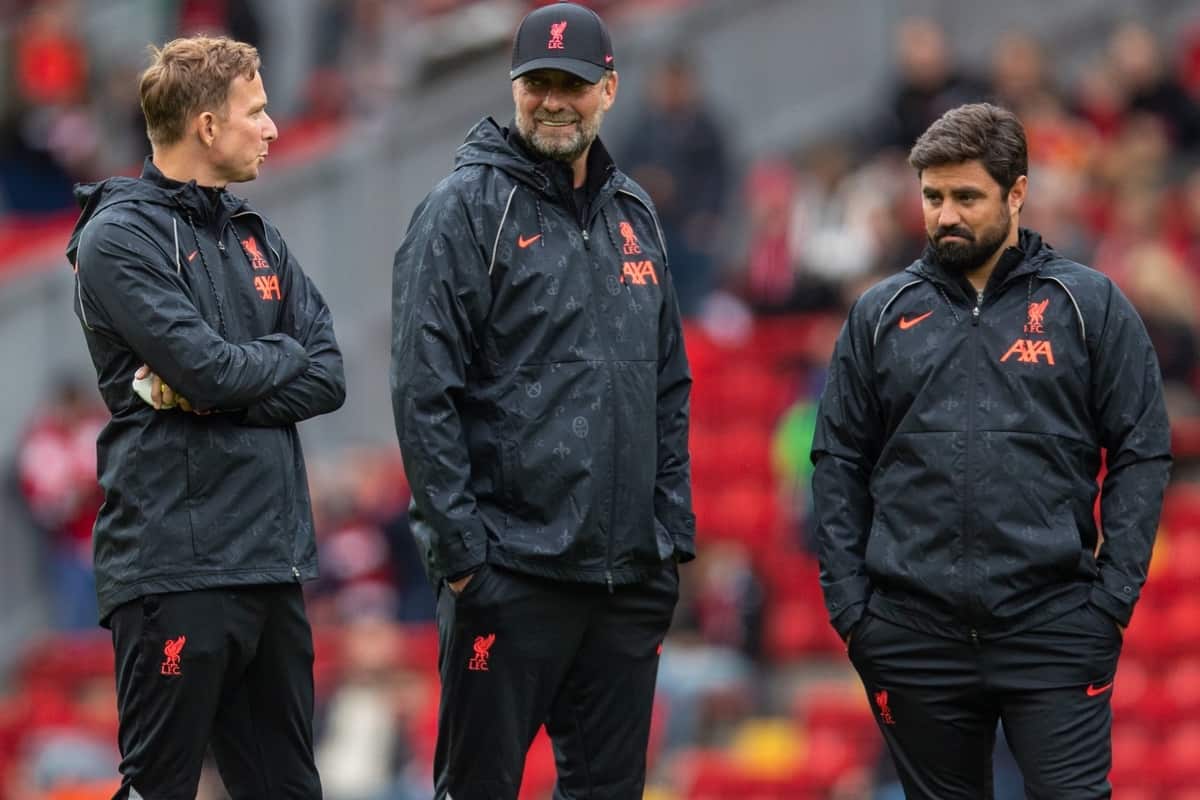 Pepijn Lijnders has hailed his successor to the role of elite development coach, Vitor Matos, as the key figure behind Liverpool’s successful conveyor belt of young stars.

Through good and bad, Jurgen Klopp has relied on youth on a consistent basis during his time as manager at Anfield.

Trent Alexander-Arnold and Curtis Jones are among those to have stepped up from the academy to cement themselves as bona fide first-team players, while others have taken up valuable squad roles.

Jones will make his 50th appearance for the club in tonight’s League Cup clash with Norwich, while Caoimhin Kelleher is expected to start in goal and the likes of Nat Phillips, Conor Bradley and Kaide Gordon could also feature.

Klopp is renowned for his faith in youth, but Lijnders has explained how the appointment of Matos as elite development coach in 2019 has made the process much easier.

“The worst thing you can do is bring a talent [up] too early,” Klopp’s assistant told reporters on Monday.

“Players need to adapt, players need to understand and [to make] step-by-step progress, making sure the right development process is in place.

“With Vitor Matos, one of the assistants, he really takes care of the young boys, really gives feedback and he really wants them to succeed.

“If this is in place, then it’s only time that young players adapt in the right way.”

It was put to Lijnders that life as a young player is much harder than 19 years ago when James Milner was making his debut as a 16-year-old at Leeds, with outside pressures particularly intense.

The role of social media is a new factor for coaches to consider, but Lijnders believed it “makes them more responsible” than many who came through in earlier years.

“It makes it harder, [but] it makes them more responsible,” he explained.

“I see talents coming through who are much more responsible than talents who came through earlier.

“They know this world around them, that the world is a mad place, a crazy place – especially on the internet.

“A strong family environment helps, of course, to take everything into logic, and a strong structure around the group is important – that whatever happens, we try to help.”

Lijnders held Phillips and Rhys Williams up as prime examples of players who have excelled due to the structure of Liverpool’s academy, allowing them to fill the void at centre-back last season.

“The process before was really important, to help them,” he detailed, “because they weren’t ready earlier. But that moment, they were ready. They helped us so much.”

The Dutchman continued: “There are so many examples of young players who have helped us over the last years.

“If you see what Harvey did, for example, in the first games – and he’s starting in the Premier League.

“It’s harder to come into a team who doesn’t play fluid football, when their ideas are not that clear, or when a manager is shouting like a lunatic.

“That’s what I like. We put our identity and culture in place the moment Jurgen came. That’s already six years of the same pathways, the same trust into young players.

“That’s something the club can build on. That’s the only way you can bring young talent into a first team.”