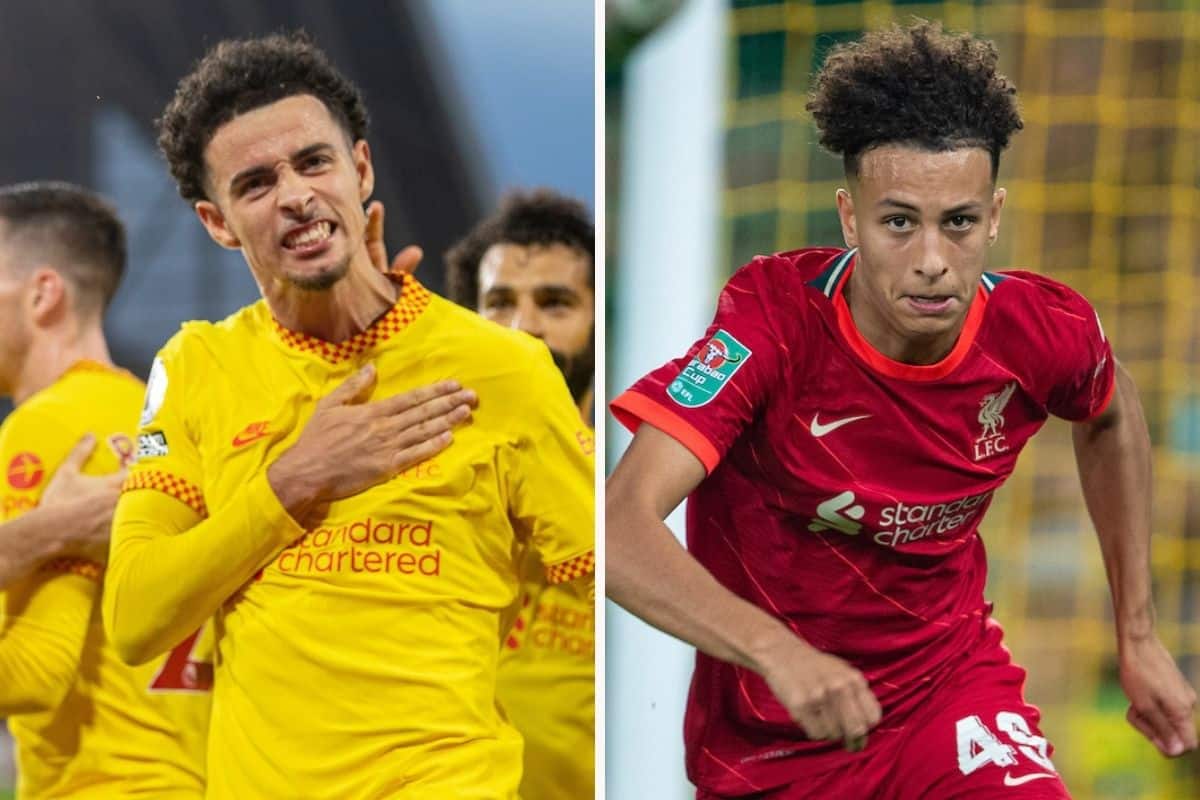 Since making his debut at 17-years-old, Curtis Jones‘ development was put on a fast track and his experiences are now filtering down to one Kaide Gordon.

The now 20-year-old has 52 games under his belt for the first-team having swiftly become a trusted member of Jurgen Klopp‘s senior contingent.

A long time standout talent at academy level, Jones has had to learn how to play his natural game and balance the needs of the team and making the right decisions at the right moment.

It’s been a notable improvement as he has come of age, with his maturity in all facets of the game clear to see thanks to his development on and off the pitch.

“I didn’t even know Norwich was going to be my 50th game, but then when I think back to that MK Dons match I’ve come a long way in terms of my whole game,” Jones said in the club’s YNWA magazine.

“I’m talking dribbling. I just don’t go mad and run off with the ball and try to shoot and score now. I try to assist. Defending wise – second balls, headers and positioning…I’ve improved over the two years and as a person I feel like a man now as well.”

And his experiences are lending themselves to the next in line from the academy, including 16-year-old Gordon who made his senior debut for Liverpool at Norwich in the League Cup.

Taking the youngster under his wing, Jones was able to provide a voice who has been there and done it only a few short years ago and provide the message to enjoy the experience as he had nothing to prove.

“I spoke to Kaide before the game and I just said ‘everybody knows why you’re here – you’re a great player – so don’t think you have to go out there and beat the world or try to score a hat-trick’,” Jones added.

“I said, ‘if you do score a hat-trick then fair enough! But just play with a smile on your face and enjoy the game’. I told him to take it all in because your debut is a proud time.

“I just didn’t want him to think he had a point to prove. It was more about him going out there, enjoying it and getting that experience. He did really well – all three of them did actually – and he was better than me on my debut [at Wolves] anyway!

“Kaide is very good, but they’re all good. That’s why they’re training with the first team.”

That Jones has taken it upon himself to lend advice and offer his experiences is a testament to his character and the Reds’ next in line at the academy can only benefit from his journey.

And there’s no doubt that the match at Carrow Road was only the first time that the likes of Jones, Gordon, Tyler Morton and Conor Bradley will feature together at senior level. The future is bright for Liverpool.