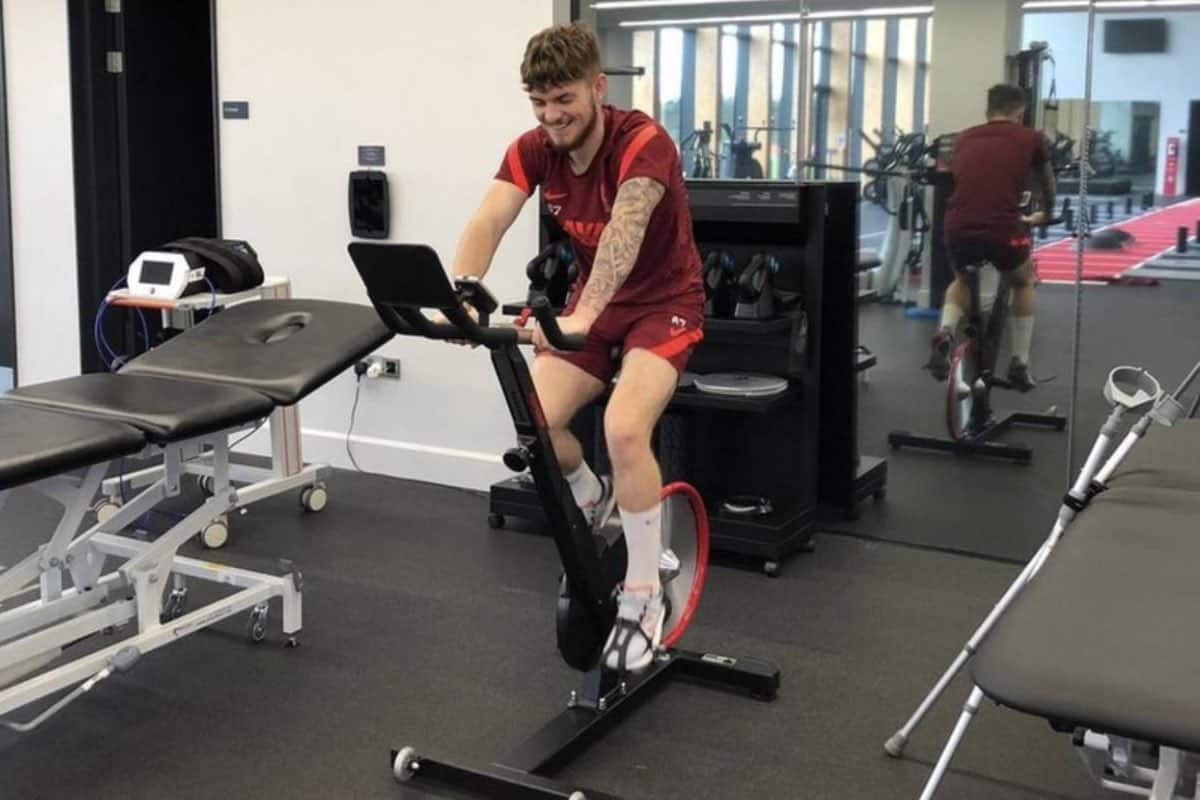 Harvey Elliott has provided an update on his recovery from the ankle injury suffered against Leeds, but fans have been warned that there is still a long road ahead.

Elliott is expected to miss at least the rest of the year after dislocating his ankle under a challenge from Leeds defender Pascal Struijk in September’s 3-0 win at Elland Road.

The teenager underwent successful surgery days after the game, and is currently following a rehabilitation programme as he works his way back to full fitness.

It is a long-term injury, and as such any update should be taken with a pinch of salt, but Elliott was clearly in positive spirits as he took to Instagram on Tuesday:

“Step by step, day by day,” the midfielder wrote, with Jordan Henderson and Virgil van Dijk among those to send messages of support.

Elliott can be seen working on an exercise bike at Liverpool’s training ground in Kirkby, with his crutches balanced on one of the treatment tables beside him.

The smile on his face is characteristic of the player’s approach to his recovery, with Elliott taking a positive outlook as he aims to return before the end of the campaign.

However, injury Twitter account @IMechanisms responded to lower expectations among supporters, suggesting this should be seen as similar to the regular video updates during Van Dijk’s recovery:

Some context on Harvey #Elliott:
?No CAM boot/cast but still using crutches
?Ankle still swollen (as expected)
?Stationary bike riding is mainly cardiovascular
?No video; limited info from pic
?Nice to see but file this along side early #VVD videos#EPL #LFC #LiverpoolFC https://t.co/eOcVDK79ON

It is noted that Elliott’s ankle is “still swollen,” with his work on the exercise bike “mainly cardiovascular,” with the youngster keeping up his fitness while not disrupting the healing process.

Furthermore, @IMechanisms even speculate that while there is no cast pictured, they “can’t imagine [he is] fully out of splint/boot already” and that it “very well could just be out of camera view.”

This may be seen as a killjoy stance on the situation, but it is right to downplay hopes of an early return from the No. 67, due to the nature of his injury.

Put simply, though, it is warming to see Elliott looking so happy as he continues his recovery.