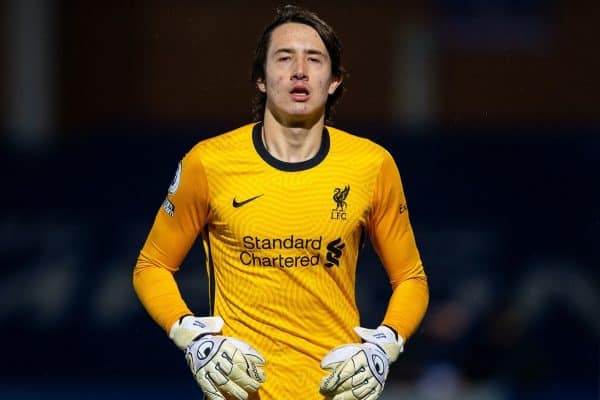 Liverpool goalkeeping coach John Achterberg has revealed that 18-year-old Marcelo Pitaluga could be in line for a loan move as he continues to progress in the first team.

Ever since Pitaluga’s protracted move to Merseyside from Fluminense was completed, the Brazilian stopper has been training on a daily basis with Jurgen Klopp‘s senior squad.

It is clear how highly the teenager is rated within the first-team setup, and ahead of his 19th birthday in December, he is already getting regular game time with the under-23s.

But he could look at his long-term pathway with the same reservations as many others before him, with Alisson an unshiftable first choice and Caoimhin Kelleher his well-regarded, 22-year-old deputy.

Game time at Liverpool could be hard to come by, and it is often the case that the standout academy goalkeepers are sent on loan to gain the experience required.

Vitezslav Jaros (St Patrick’s Athletic) and Jakub Ojrzynski (Caernarfon Town) are currently away from the club, while the likes of Kamil Grabara and Danny Ward have benefited in recent years.

Given his status, Pitaluga could be the next to depart on a temporary basis, with Achterberg telling the Liverpool Echo of the plan ahead.

“He’s a good talent and we are happy with his progress. Now he just needs to play more and more,” the Dutchman said.

“He had quite a bit of an injury which obviously didn’t help him too much but now he’s back fit, he’s training and learning from Ali as well, and Caoimhin and Adrian are all trying to help.

“We as the coaches, me and Jack [Robinson], try and help him as well to make the next step. That’s how it is.

“I don’t want to put him under pressure because he is still a young boy. The plan is to make the right steps for him, when he is ready to go on loan or maybe play some friendlies and stuff like that.”

Finding the right destination for any player is crucial to the loan process, and it is particularly difficult for young goalkeepers who are often thrust into their first-ever role as No. 1 in a brutally unforgiving position.

Jaros, 20, is currently in the Republic of Ireland while Ojrzynski, 18, is impressing in Wales, with their spells away designed to toughen them up after adjusting to the comforts of Kirkby.

Pitaluga is unlikely to be ready for club in the Championship, or perhaps even League One or League Two, at this stage, but Achterberg hinted that a move could develop as early as January.

“We try to make them the right career by the right steps and then hopefully he can make the big step, because not everyone will make it at Liverpool,” the coach continued.

“It is playing for a special club and you have to produce under pressure, but hopefully he can do all these things.

“I don’t want to put him under pressure, we just want to see what happens. I want him to just develop and make the next steps, that is the main thing.”