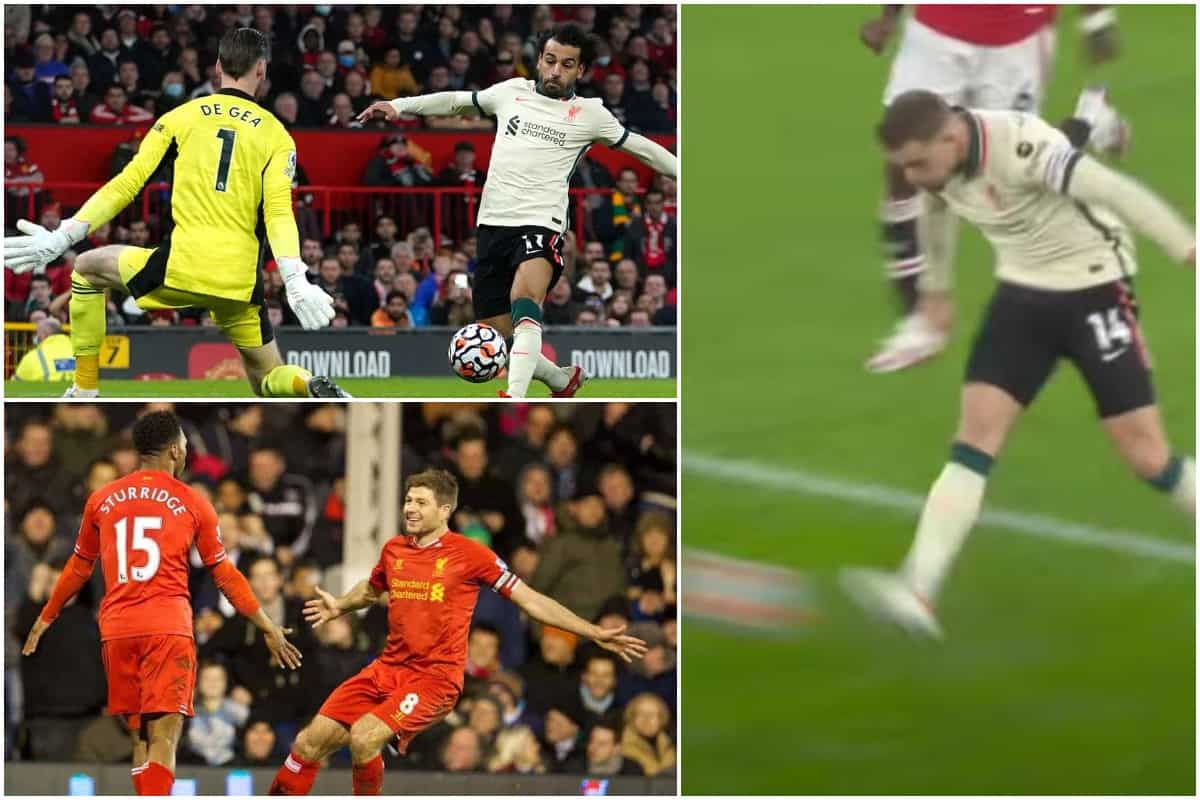 Liverpool’s spanking of Manchester United on Sunday included a throwback moment which fans noticed, bridging history between one LFC captain and the next.

The Reds ran riot at Old Trafford, putting five past their hosts before easing off to save themselves for more difficult tests in the coming weeks, such as Preston and Brighton.

But for an hour or so it was relentless and remarkable, Naby Keita starting it all early on before Diogo Jota added a second – and Mo Salah notched goals three, four and five to continue his record-breaking run.

Salah’s hat-trick leaves him on 15 for the season, in just 12 games, with a matchball on his mantlepiece and another batch of records falling to his name.

It’s incredible going – but of course he gets a whole lot of help to notch those strikes, with his third being provided by an outrageous outside-of-the-boot assist from skipper Jordan Henderson.

Fans definitely appreciated the effort, and it immediately called to mind another assist of a very similar type for a very similar goal: the Reds’ former captain Steven Gerrard, and his through ball to set clear Daniel Sturridge – another left-footed forward – against Fulham, with predictable results.

HENDERSON WAS RIGHT NEXT TO GERRARD WHEN HE DID THIS. HE WAS TAKING NOTES pic.twitter.com/ok1OjZBfJN

Jordan Henderson has never looked more like Steven Gerrard than when playing that 50 yard through ball with the outside of his boot. What a pass.

That Henderson pass to Salah reminded me of Gerrard to Sturridge at Fulham in 2013/14.

Henderson doing the Gerrard pass you just love it???

THAT Henderson assist was genuinely Gerrard to Sturridge vibes as fuck….

What a pass that was from Jordan Henderson by the way, Gerrard to Sturridge through ball that ???

That Henderson pass to Salah exactly the same as Gerrard to Sturridge against Fulham ?

Henderson only notched one assist in the league in the entirety of last season when he suffered injuries and had to play centre-back; this was already his second of this campaign in just seven league starts.

Of course the team performance and result is overall the more important – but it’s a fine reminder of individual quality when moments like this are produced.

Plus, when you’ve got Salah on the end of your passes, an assist is all-but-guaranteed!