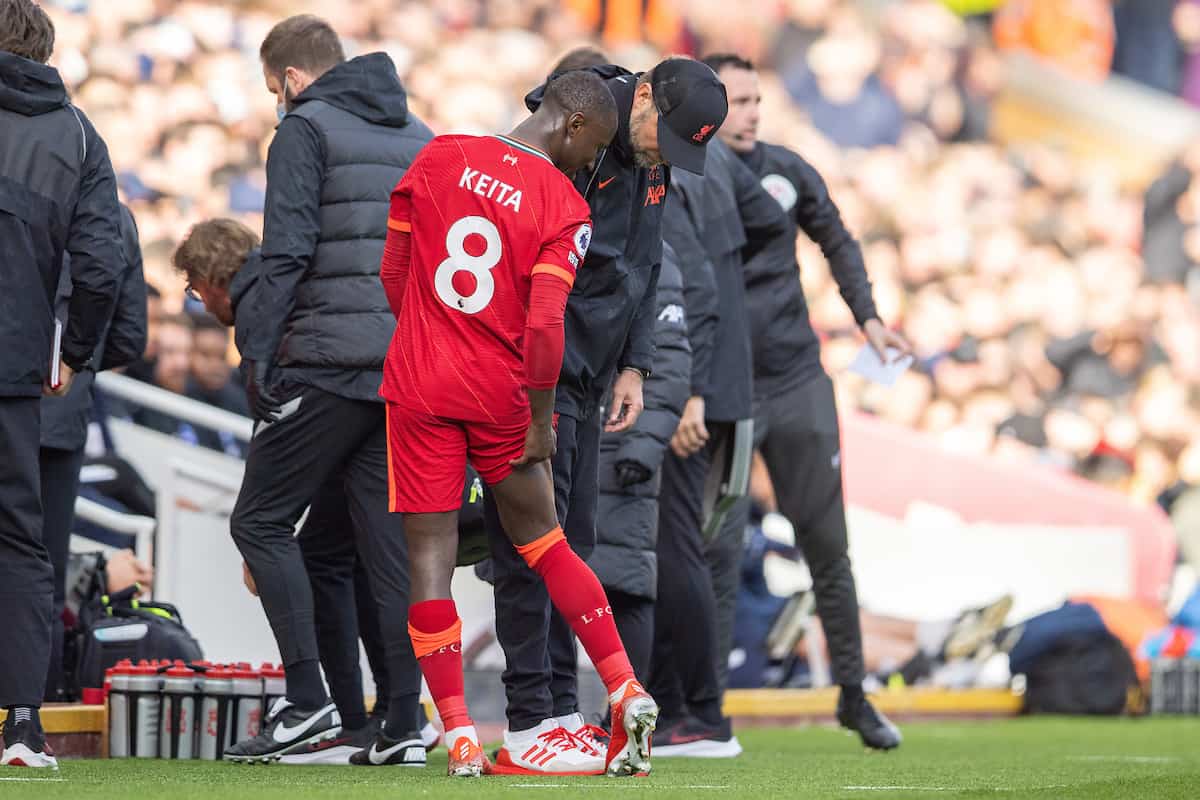 Jurgen Klopp has effectively ruled Naby Keita out of at least Liverpool’s next game at home to Atletico Madrid, as the club await a scan on the No. 8’s hamstring injury.

Keita was forced off after just 19 minutes of Saturday’s 2-2 draw with Brighton, walking off the pitch and pointing to his hamstring in an exchange with Klopp on the touchline.

The midfielder was immediately sent down the tunnel for treatment, with Alex Oxlade-Chamberlain taking his place and setting up Liverpool’s second goal before a disappointing collapse.

After four consecutive victories over Watford, Atletico, Man United and Preston, a draw with Brighton brought a still-unbeaten Liverpool back down to earth.

Klopp is required to reinvigorate his side for the visit of Atletico in the Champions League in midweek, with a win enough to secure progress to the last 16 with two games left to play in Group B.

But the manager could struggle to put together a competitive midfield, with Keita adding to his list of absentees for the clash.

“He showed me [it was his] hamstring, so I don’t know. We will see, obviously,” he told LFCTV on the issue.

“Tomorrow, day after tomorrow, whatever, we will have a scan and then we will know.

“If somebody feels their hamstring, it would be the first time that he is ready for the next game. So I can’t see that.”

Keita will not be the only midfielder to miss the Atletico game, with James Milner, Harvey Elliott and likely Fabinho all sitting out, while Thiago was not even named in the matchday squad on Saturday.

The ideal scenario would be Thiago starting alongside Jordan Henderson and Fabinho, but in reality, a trio of Henderson, Oxlade-Chamberlain and Curtis Jones could be expected.

Given that unit struggled in the second half against Brighton, it would not bode well against the Spanish champions, though it must be stressed that Liverpool remain in strong form, with the weekend’s draw resembling a blip.

For Keita, this hamstring injury is the latest in a long line of setbacks in his career at Anfield, having made a swift recovery from a red-card challenge from Paul Pogba in the 5-0 victory over United a week previous.

Hopefully, the 26-year-old will not be sidelined for too long, but if a similar injury for Milner is anything to go by, he could be out for at least the next five games.