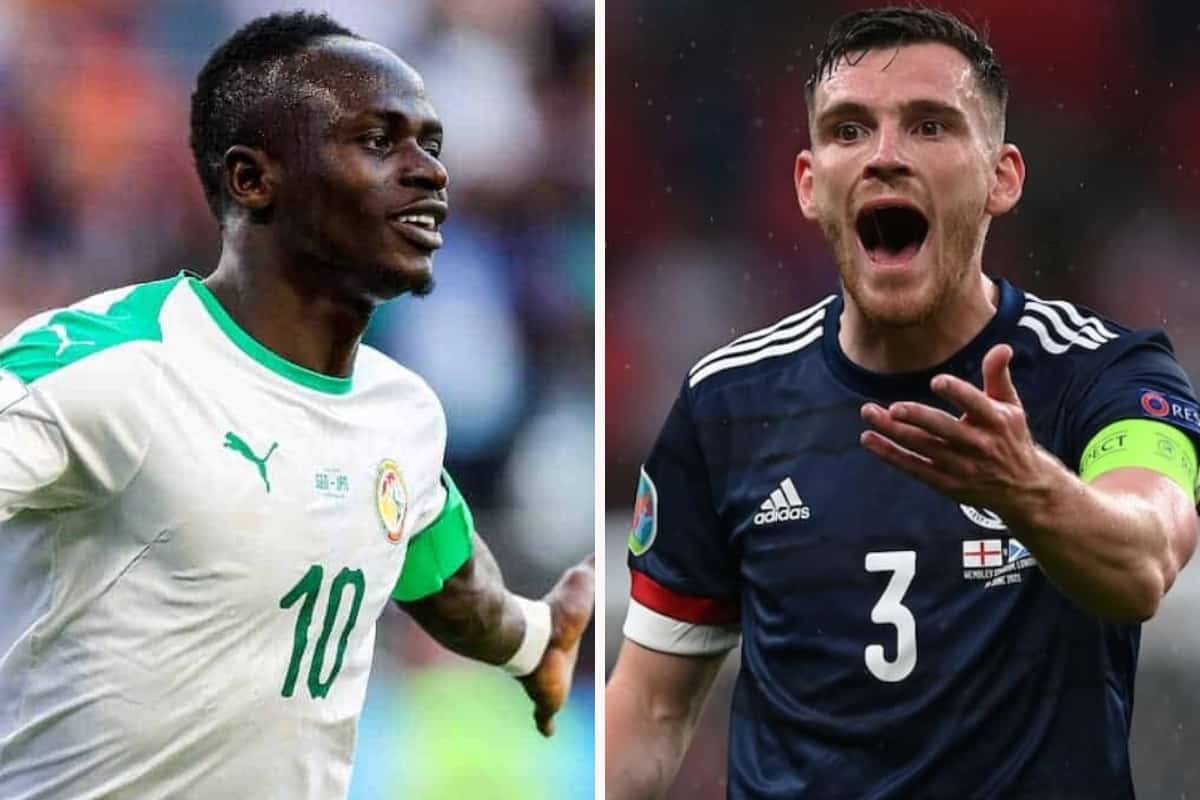 Sadio Mane and Andy Robertson had a hand in five goals in World Cup qualifier wins for Senegal and Scotland, as a Liverpool youngster made his England debut.

It has been a mixed start to the season for Liverpool’s left-wing duo, but Mane and Robertson were both in excellent form as they played their first international fixtures of the break.

Mane lined up as a No. 10 as Senegal took on Namibia in the first of their two meetings this month, knowing a win would push them five points clear of their opponents at the top of their qualifying group.

Paris Saint-Germain midfielder Idrissa Gueye got Senegal off to the perfect start in the 10th minute, as he improvised and fired home from Mane’s turn in the box.

Ismaila Sarr then laid on an unstoppable header for Famara Diedhiou, with Mane then hitting the post after showing great strength to beat his marker on the cusp of half-time.

???? Sadio Mane registered two assists, almost fell over celebrating one of them, hit the post and scored a wonder goal as Senegal made it 9 points from a possible 9 in Group H ?

The 29-year-old made no mistake after the break, though, with a brilliant solo effort that saw him beat three defenders and then fire low into the bottom corner with his left.

Namibia grabbed one back through Joslin Kamatuka, but Keita Balde sealed the victory by turning home Mane’s fine cross with six minutes left to play.

In Glasgow, Robertson played a vital role as Scotland overcame an early setback in their World Cup qualifier against Israel to secure a 3-2 win that puts them in a strong position to reach the playoffs.

Eran Zahavi put Israel 1-0 up in the fifth minute with an incredible free-kick, but Robertson’s energetic one-two allowed him to lay it to John McGinn to equalise.

Israel regained the lead through Mu’nas Dabbur before Lyndon Dykes saw a woeful penalty effort saved, but the QPR striker atoned for his error in the second half as he volleyed in Robertson’s cross.

Remarkable scenes late on then saw Scotland take the win, with Scott McTominay bundling in from McGinn’s corner to ensure the three points.

Elsewhere, Naby Keita played 76 minutes in Guinea’s 2-2 draw with Sudan while Kostas Tsimikas lasted the full 90 in Greece’s 2-0 win away to Georgia.

Conor Bradley came off the bench for the final four minutes of Northern Ireland’s 2-0 defeat to Switzerland, with the game marred by a farcical red card for Jamal Lewis.

Lewis had already been booked for a tussle with Breel Embolo early in the first half, and was then sent off for a second yellow after being judged to have wasted too much time taking a throw-in in the 37th minute.

It was a proud moment for 18-year-old Harvey Davies as he made his England debut at under-19s level, with James Norris playing an hour and James Balagizi coming off the bench for the final 20 minutes in a 3-1 victory over Mexico.

Jordan Henderson was unused as the England senior side won 5-0 win in Andorra, while Caoimhin Kelleher also watched on in the Republic of Ireland’s 3-0 victory over Azerbaijan.

Diogo Jota missed Portugal’s 3-0 friendly win against Qatar due to a muscle injury.