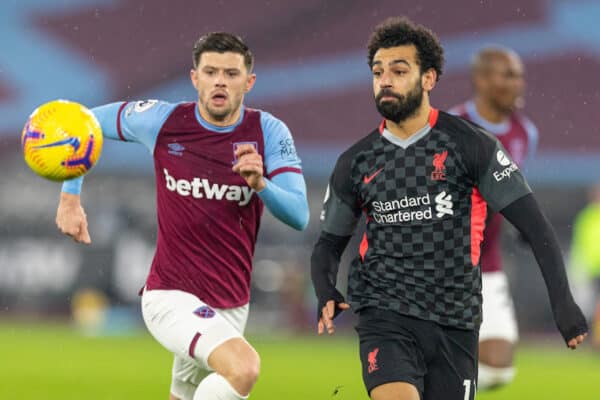 10 key things to know ahead of West Ham vs. Liverpool

Liverpool face one of their toughest games of the season so far when they travel to the capital this weekend, with an inspired West Ham side awaiting their arrival.

The Reds secured their place in the last 16 of the Champions League in midweek, seeing off Atletico Madrid with ease, but attention now turns to Sunday’s crucial journey to east London in the Premier League.

David Moyes has taken some stick from Liverpool fans down the years, given his Everton and Man United past, but he is doing an excellent job at West Ham.

The Scot has built a strong team that genuinely look like top-six contenders currently, with quality and strength throughout the team.

With 10 matches played, the Hammers are fourth in the table and level on points with Man City – victory on Sunday would see them leapfrog the Reds.

That highlights the task that Jurgen Klopp‘s men have on their hands this weekend, with the manager saying, “It’s good fun watching them. They have become a high-intensity team.”

2. How could the Hammers line-up?

Moyes has had the luxury of suffering few injuries so far this season, allowing him to name a settled team in the league.

In fact, Sunday’s starting lineup all but picks itself, given the consistency West Ham have been performing with.

The only potential change could see the returning Vladimir Coufal come in for youngster Ben Johnson at right-back, but even that doesn’t look a certainty.

In Declan Rice, the Hammers have one of the best midfielders in the league at present and someone who could go on to be a future England captain.

Unfortunately, Liverpool picked up yet another fresh injury blow against Atletico – can they go a single game without it happening now?

Roberto Firmino limped off with a “serious” hamstring problem on Wednesday evening, with Klopp suggesting a period of more than four weeks on the sidelines.

The Brazilian joins Joe Gomez and Naby Keita on the injury list – the latter has the same issue – while Curtis Jones is also out and Harvey Elliott continues to work his way back from his ankle surgery.

Much like West Ham, it is easy to pick the vast majority of Klopp’s starting XI on Sunday, but he has a few selection headaches to contend with.

Joel Matip and Ibrahima Konate will battle to start alongside Virgil van Dijk, while Andy Robertson will hope to come back in for the increasingly impressive Kostas Tsimikas.

Thiago could make his first start since the middle of September, but Alex Oxlade-Chamberlain‘s performance against Atletico gives him a good chance of featuring prominently once more.

Liverpool have faced West Ham five times at the London Stadium since they moved on from Upton Park, remaining undefeated in that time.

The Reds’ first-ever game there saw them win 4-0 in May 2017 – a crucial victory on the penultimate weekend of the season that helped book a place back in the Champions League.

A 4-1 triumph later that year was also memorable, although a 1-1 draw at the backend of 2018/19 proved costly in a legendary title race with City.

Liverpool then picked up respective 2-0 and 3-1 wins in their last two visits to east London, with Mohamed Salah scoring an outrageous effort last season after finishing off a stunning team move.

6. Antonio the man to fear

There are dangerous players throughout West Ham‘s team, from the dominant Tomas Soucek to the talented Said Benrahma, but Michail Antonio has been their star man so far this season.

The 31-year-old has scored six goals and registered three assists in nine league appearances, bullying defenders along the way.

Antonio’s physicality could make him a huge handful on Sunday, so Van Dijk and his centre-back partner will need to perform better than they did up against Brentford‘s Ivan Toney.

The Hammers striker has claimed that “no one is stronger than me”, very much laying down the gauntlet ahead of the weekend action.

Robertson’s performances have come under some scrutiny of late, not least his penchant for dropping deep and playing opponents onside.

Despite this, as well as calls for Tsimikas to keep his place, Klopp has hailed the Scot as the best on the planet in his position:

“Kostas is very close. He has a lot of quality. He pushes Andy Robertson but in my eyes, Robbo is the best left-back in the world. It’s good we have options to give Robbo a rest in moments.”

Is that a team news hint from the boss?

The win over Atletico stretched Liverpool’s unbeaten run to 25 games in all competitions, it dates all the way back to April.

They haven’t tasted defeat since losing 3-1 away to Real Madrid in the Champions League quarter-final first leg – even that was at a training ground, so does it even count?!

Should Liverpool avoid defeat on Sunday, they will set an all-time unbeaten club record, beating the tally set by Bob Paisley’s side back in 1982.

Sometimes, we take this team for granted.

Craig Pawson has been confirmed as the referee for the weekend action, while Stuart Attwell is on VAR duty.

It is Pawson’s second Liverpool outing of the season, with the 42-year-old taking charge of the 3-0 win away to Leeds in September, sending off Pascal Struijk after his tackle broke Elliott’s leg.

Last season, the Reds were undefeated in the five league matches he oversaw – four wins came against Arsenal, Wolves (twice) and Crystal Palace.

The only dropped points were away to City – Pawson awarded Liverpool a penalty – as Klopp’s side drew 1-1 at the Etihad.

If that doesn’t tickle your fancy or you’re unable to watch the game, Henry Jackson is in charge of our matchday live blog from 3.45pm.

Expect plenty of pre-match content, minute-by-minute updates during the match and some nervous posts as the minutes tick by.