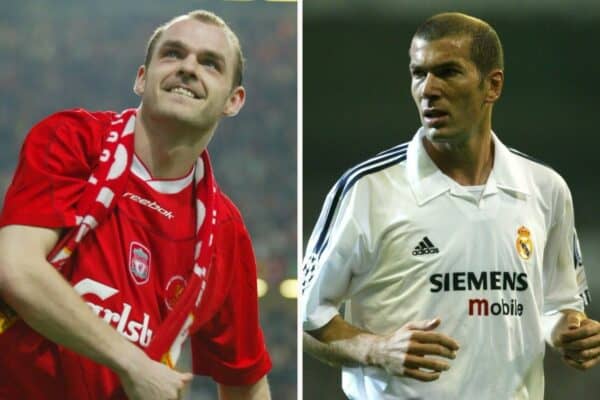 Danny Murphy has told the great story of how Gerard Houllier gave him Zinedine Zidane’s 1998 World Cup final shirt as a reward for his improving form for Liverpool.

Murphy was one of Houllier’s most important players while in charge at Anfield, with only four others – Michael Owen, Steven Gerrard, Jamie Carragher and Sami Hyypia – making more appearances.

He was the Frenchman’s third-highest goalscorer and second-top assist-maker, coming through an early loan with Crewe and staying at Anfield for the rest of Houllier’s tenure.

Both Murphy and Houllier left Liverpool in 2004, with few players encapsulating the manager’s time on Merseyside the goalscoring midfielder.

Their connection saw Houllier reward Murphy with a special shirt, soon after he was called into the England squad in 2001, though as he told the story for talkSPORT, its presentation brought laughs.

“Gerard Houllier was my manager at Liverpool, as you know, and he had a major influence and friendship with Zidane from his days in France,” he said.

“He kept in touch with him over the years, and one day I’ve gone into the office – it was after I’d been called into the England squad.

“So I’d been on a journey with Houllier at Liverpool, from being sent back out on loan to Crewe, coming back, getting in the first team, being a regular, winning some trophies, getting in the England squad.

“And he called me in the office one day and he had a plastic bag, Co-op, Tesco or something, and he just threw it on the desk and said: ‘That’s for you’.

“I pulled out the shirt and it’s got ‘Zidane’ and the badge on, World Cup final, blah blah blah, and he said ‘Zinedine gave me this after the final, but I want to give it to you’.

“I was in a bit of shock! He said ‘I’ve spoke to him, it’s fine, I’m going to give it to you as a reward for the journey you’ve been on’.

“And what he explained was he kind of went on a journey with Zidane – he wasn’t comparing me to Zidane, by the way! – but it was just kind of a reward from him, to give me something to say well done.”

As Murphy continued, he admitted that he rarely considered the shirts of fellow players as important, but the significance of Houllier’s gift made it special.

“That one kind of took me back a bit, because of the gesture, and obviously the importance of the shirt.

“You know what it’s like in finals, he probably gets three or four shirts, whether he actually wore it or not [I don’t know], but it’s the fact that [Houllier] thought, ‘I’m going to give you that to reward you’. So I’ve got it.

“Funnily enough, I’ve had some brilliant shirts over my time and I’m not one for putting them about, I just keep them safe.

“So if anyone wants to come around my house and steal them, it’s not there!”