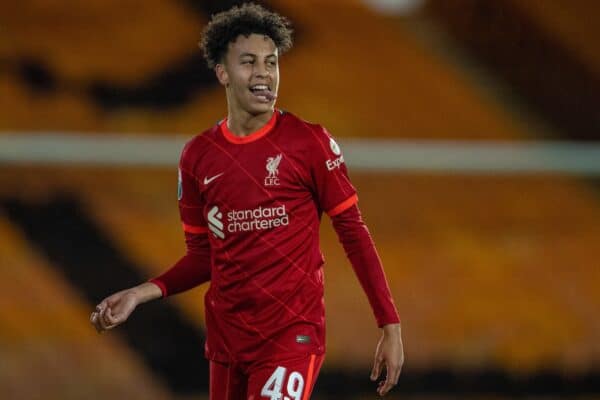 A makeshift Liverpool under-21s side lost 5-0 to Port Vale in the EFL Trophy on Tuesday night, but a key positive came with extended game time for a fit-again Kaide Gordon.

The EFL Trophy – for sponsorship reasons known as the Papa John’s Trophy – is a strange competition, pitting U21s sides from the Premier League against their senior counterparts from League One and League Two.

It is no surprise, then, that Liverpool have lost nine consecutive games since entering in 2019/20, with the trip to Port Vale bringing their heaviest since last season’s 6-1 defeat to Wigan.

With a number of injuries and players absent on international duty, Barry Lewtas named a mixed side including nine teenagers, with four players – including 16-year-old Bobby Clark – making their EFL Trophy debut.

Five starters were fielded out of position, too, with Clark up front, centre-back Stefan Bajcetic at right-back, left-back Tony Gallacher at centre-back and forwards Jack Bearne and Max Woltman in midfield.

Lewtas could only call upon four substitutes, with two of those goalkeepers and the others 17-year-olds Oakley Cannonier and Tommy Pilling.

For a brief spell, though, Liverpool began on top, with Gordon – also making his first appearance – a bright spark early on as he fired three attempts on goal in quick succession, drawing two saves and a block.

The floodgates opened after 15 minutes, though, with Port Vale capitalising on an unsighted pass from Bajcetic to build a move that saw George Lloyd head home.

Another poor pass from Jarell Quansah allowed Dennis Politic to make it 2-0, before the centre-back’s deflection lifted Mal Benning’s shot over the wrong-footed Marcelo Pitaluga.

Former Liverpool forward David Amoo came on for the hosts after the break, with further woes for Pitaluga and Dominic Corness handing Port Vale their fourth and fifth goals.

While the merits of a mismatched U21s side receiving a hiding in the EFL Trophy can come into question, it is clearly seen as a valuable experience for those youngsters by the coaches at Kirkby.

This time around, the sight of Gordon playing 76 minutes against senior opposition, after clocking 45 on his return from injury a week previous, will be considered vital by those within the first-team setup.

The youngster travelled with Jurgen Klopp‘s side to West Ham at the weekend, and while he was not involved, it would be no surprise to see him at least named in a matchday squad during Roberto Firmino‘s absence.