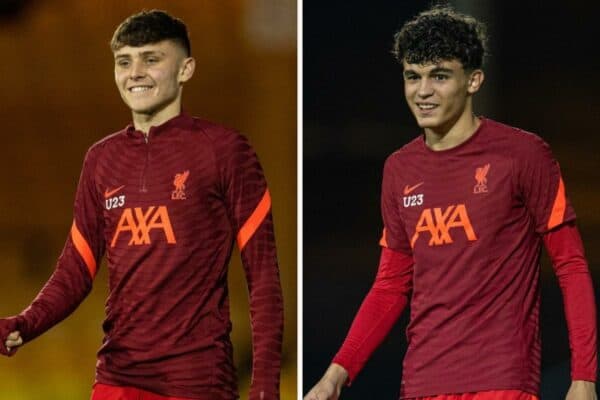 Jurgen Klopp had two new faces as part of his Liverpool squad in training on Thursday, as preparations continue for the weekend’s visit of Arsenal in the Premier League.

The Reds are finally back in action this weekend and looking to put their 3-2 defeat to West Ham behind them, though they come up against another in-form opponent.

Fifth-placed Arsenal are unbeaten in 10 games and sit two points below Liverpool in the table, with their trip to Anfield giving them the opportunity to leapfrog the title contenders.

Klopp is beset with injuries, as ever, with Roberto Firmino, Naby Keita, James Milner, Curtis Jones, Joe Gomez and Harvey Elliott all ruled out of the game.

Andy Robertson is expected to be available, while Jordan Henderson could also feature despite the pair returning from international duty with minor issues.

To deal with the decrease in numbers throughout his squad, Klopp has turned to elite development coach Vitor Matos to recommend young players to flesh out his ranks in training.

Thursday saw under-18s talents Bobby Clark and Stefan Bajcetic join the first team, along with Mateusz Musialowski, who was part of the youth cohort working with the senior squad during the international break.

Clark, a summer signing from Newcastle, is a creative midfielder who has slotted into a key role within Marc Bridge-Wilkinson’s U18s side this season.

So far in his first campaign on Merseyside, the 16-year-old has scored twice and assisted once in seven appearances, which included a debut against senior opposition in the EFL Trophy.

Meanwhile, Bajcetic has been at the club slightly longer, having become the final overseas player under the age of 18 to join Liverpool before Brexit restrictions came into place.

The Spain youth international has Serbian heritage through his father, former Red Star midfielder Srdjan Bajcetic, and arrived from Celta Vigo in December in a deal worth £224,000.

Bajcetic is primarily a centre-back, but has also played as a defensive midfielder this season, and is comparable to Joel Matip in his defensive dominance along with his passing and dribbling ability.

Beyond those injured, Liverpool were also without Fabinho for their training session on Thursday, though there is no indication at this stage that the Brazilian has a problem.