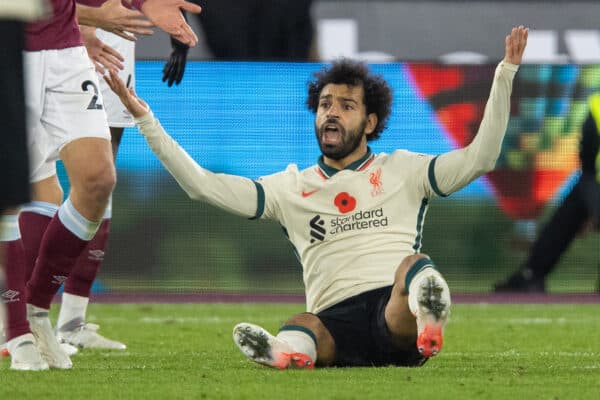 Liverpool’s unblemished record in the loss column this season earned its first blemish as the Reds succumbed to a 3-2 loss at the hands of West Ham.

The Reds made the trip to the capital off the back of a 25-game unbeaten streak, one that was ended by a West Ham side who played to their strengths.

The night started on a sour note with Alisson’s blunder that set the tone and while Liverpool worked their way back into the game through Trent Alexander-Arnold, it was the hosts who made their chances count.

Pablo Fornals and Kurt Zouma capitalised on a fallible defensive performance and while Divock Origi offered a lifeline, the damage was done before Sadio Mane then was handed the chance to earn a draw.

And frustration was clear from Liverpool fans on social media after the defeat as Jurgen Klopp‘s men were their own worst enemy as they saw the Hammers leapfrog them in the table as a result:

West Ham deserve this. And then some.

Really disappointed but I'm not as angry as I was at most of our draws. This was a tough match where we played well with the ball, scored twice and created plenty, but couldn't deal with a couple of excellent setpieces and a counter. In some of the draws we threw away 3 points.

Could be a blessing, unbeaten with too many drawn often papers over issues. Second half vs Brighton, then Brentford, City and Chelsea. A defeat might focus the mind. It’s often better to win two and lose two, than draw four #WHULIV

Liverpool can still win this league this season, but we can’t keep dropping points and missing out on opportunities when the teams above us drop points too. City lost last week, Chelsea this, and we’ve failed to capitalise.

Our keeper wasn’t the reason it took a very special free kick to do anything like threaten the opposition goal for the first 80 minutes. There’s plenty at fault, plenty of blame to share around and a couple of weeks off to try and get on top of it all. https://t.co/Ioe64sdwFi

Poor, poor second half from Liverpool on a weekend where anything less than three points wasn't good enough.

As bad as I’ve seen us considering the team we have out.

The amount of goals (and chances) Liverpool have conceded this season without opposition sides having to do anything particularly good is massively concerning. Completely unrecognisable from 18/19 & 19/20 in that regard.

Somewhat self-inflicted defeat as #LFC poorly defended the moments West Ham were looking for i.e. corners and quick breaks. That chance for Mane at the end should have levelled it, though.

As bad a performance as you'll see from #lfc and yet it could easily have finished 3-3.

Letting in too many soft goals and if it wasn't for Van Dijk that could have been a lot worse.

That was reminiscent of Liverpool defeats of the past. Horrendous goalkeeping, falling to bits from set-pieces and missing sitters.

Some of the more optimistic fans might point to the long unbeaten run and say it had to end eventually but that was a worrying loss. Nearly full strength, out-played at 1-1 deservedly beaten. 2 wins in 6 in the PL.

Hammers were good. We were flat. Pawson is a fucking disgrace. We’re still only 4 points off the top in November. Onward and upward.

With an international break now upon us, the result can be seen as both a blessing and a curse.

It offers a time to reset and make the necessary tweaks but at the same time, it’s one that will linger until Liverpool return on November 20, when Arsenal arrive at Anfield.

There are still 27 games to go but Liverpool have to improve, most notably in controlling games which they did so well in the trophy-laden season. Onto the next one!