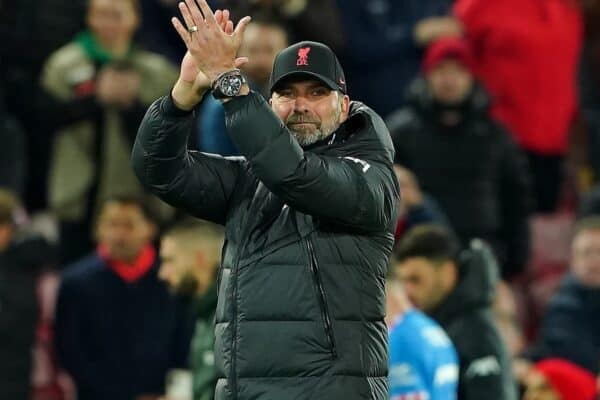 Liverpool can set a club record of 26 games unbeaten at West Ham but Jurgen Klopp distanced himself from any comparisons with Bob Paisley’s legendary team of the 1980s.

The Reds last tasted defeat in April at Real Madrid, seven months later the unbeaten record stands at 25 in all competitions.

The feat is incredible and it’s one the current team share with Paisley’s men from 1982, but that is where the comparison starts and ends for Klopp despite having the chance to eclipse the current record.

“I cannot compare these times, I watched football at that time but as a kid and I have no idea how football was at that time, to be honest,” Klopp told reporters.

“But it was for sure not easy in Shankly and Paisley times to win football games.

“Whatever it is, there was a specific level for all footballers and for all teams and one team had to overcome it, and to overcome that as regularly as Bob’s teams did that makes them all-time greats. No doubt about it.

“Why should we compare that? We don’t see ourselves in any kind of comparison with them.

“We don’t look at what’s possible and then if we see oh, it could be difficult and then stop there.

“No, if we see it is possible but difficult then the fun part starts really, then we want to have it with all we have.

“That’s exactly how our journey so far worked out. We had a look at where can we go and if we saw we can go there then we wanted immediately to make the next step.”

While records, which his side are no strangers of, mean his side are on the desired trajectory and then some, it is far from the main focus for Liverpool rather a byproduct of their success from one game to the next.

“In this league, we are now in November, we all know the decisive parts are coming up now and we never said any different,” Klopp continued.

“We said the first 10 games or so you have to create the basis for the season and that’s what we did so far. It’s an absolutely okay basis, not more not less.

“If we can break records along the way, we were never keen to do so that’s why it happened from time to time I think.

“This team already set a few records, I don’t know exactly which ones, but which nobody reached in the 100-and-odd-year history of this club.

“We are not really focused on records but if it happens it’s a good sign because then we are obviously winning football games.

“We don’t go for a record at West Ham, we go for three points which is already difficult enough.”