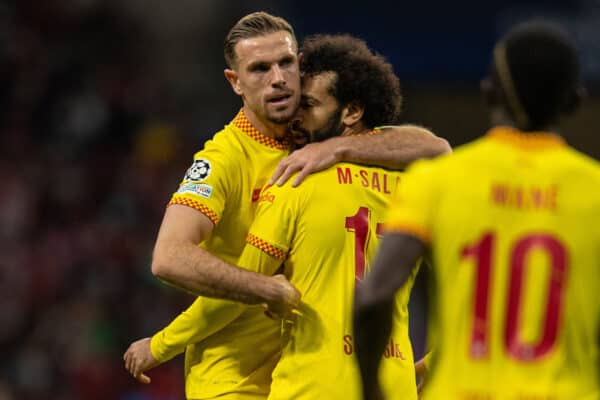 Mohamed Salah is chasing John Toshack’s record against West Ham on a milestone day that Jordan Henderson will hope to commemorate in a winning fashion.

The Reds did not lose in six league visits to London last season and have lost only one of their last 17 Premier League matches in the capital – at Arsenal in July 2020 after they had clinched the league title.

They have scored at least three times in every away league game this season – the first time they have ever achieved the feat in their opening five away games of a league campaign.

And Liverpool have won more Premier League games against West Ham (31) than they have against any other team in the competition.

How About These Records?

Jordan Henderson could make his 300th league appearance for Liverpool – he will become the 44th player to achieve the feat for the club and only the fourth to do so in the Premier League era, after Jamie Carragher (508), Steven Gerrard (504) and Sami Hyypia (318).

He could also make his 350th start for Liverpool in all competitions.

Liverpool could also set a new outright club record since joining the Football League in 1893 by going 26 games unbeaten in all competitions, upstaging the 25 set between March and September 1982 under Bob Paisley.

They did go 30 unbeaten from February 1893 to February 1894, a sequence that included seven Lancashire League games.

And the Reds have never before scored a hat-trick in three successive away league games (Firmino at Watford and Salah at Manchester United in the last two away on road in the league). Could they do so on Sunday?

Are we Even Surprised?

Mo Salah needs one more goal to equal John Toshack’s club record of 10 goals against West Ham in all competitions.

He has scored nine times in eight appearances against the Hammers, the most he has scored for Liverpool against a single English club, along with Watford.

It is the most by any Liverpool player in history in the league against West Ham.

And he could become the first Liverpool player in history to score in five successive league games against West Ham and the first to find the net in three consecutive Liverpool league visits to the Hammers.

They currently have 20 points from the opening 10 games and can go above Liverpool with a win today.

Only in 1975/76, using three points for a win, have they registered more points (21) at this stage of a top-flight campaign. And only seven of their 20 points this season have come at the London Stadium.

They have lost only two of 16 games in the league and cup this season, both home defeats (1-2) to Manchester United and Brentford.

Keep Antonio Out of the Box

All of Michail Antonio’s 52 Premier League goals have been scored from inside the penalty box.

He has scored five goals for West Ham in his nine appearances against Liverpool. Only Vic Watson (nine) and Geoff Hurst (eight) have ever scored more for the Hammers against the Reds in all games.

David Moyes will be managing against Liverpool for the 36th time in his career. He has won five previously with 21 defeats and has lost all five with the Hammers, conceding 14 goals.

He has not won any of his last 14 league meetings with the Reds (four draws and 10 defeats) and the last eight in all competitions since a 1-0 League Cup success in 2013 while with Manchester United.

His last league victory over the Reds came with Everton at Goodison in October 2010 (2-0).