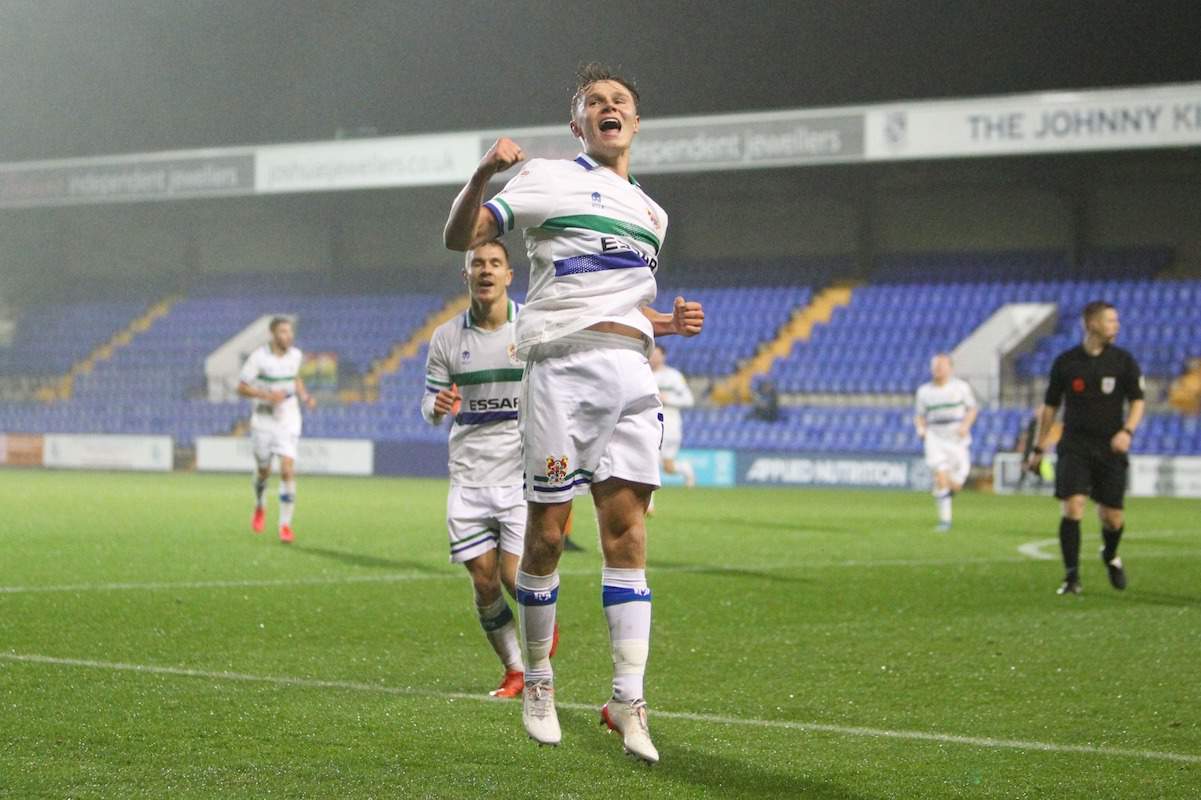 Paul Glatzel continued his excellent run of form for Tranmere with another goal on Tuesday night, bringing his tally to four goals and two assists in his last three starts.

Ever since moving to his natural position as a striker, Glatzel has been able to properly show his quality while on loan at Tranmere.

After a difficult start to life under Micky Mellon, the 20-year-old has experienced a shift in recent weeks, and that has translated to an influential run in the side.

It began with two goals and an assist in the 3-2 victory over Oldham in the EFL Trophy, and after returning to the bench for the 1-0 loss to Sutton United, he was back with a goal and assist in Saturday’s 2-2 draw at Bristol Rovers.

Three days later, he kept his place in the side as he made consecutive starts for Tranmere for the first time since August.

After having the best of the chances early on, Tranmere went a goal down to Bradford as Levi Sutton cut inside and fired home in the 26nd minute.

But following the half-time interval, Kieran Morris picked up a loose ball and, from 25 yards out, drove it low into the bottom corner to restore parity.

Soon after, Glatzel grabbed the winner, following up Josh Cogley’s cross and, after a poor touch from Bradford defender Finn Cousin-Dawson, stole in to find the back of the net and seal the three points.

The 20-year-old was named Man of the Match for his performance, having also been given the award at the weekend, with Tranmere fans taking to Twitter to admit they were wrong in doubting him early into his time with the club:

The biggest slice of humble pie coming my way. Glatzel was excellent tonight.

Glatzel was top notch tonight. Clearly, he was badly lacking fitness at the start of the season. Hell, he’d barely kicked a ball for two years. Looking a proper player, now.

Who is this Glatzel lad and when did he sign? He looks a different fucking player last couple weeks been top class tonight!

Decent turnaround early 2nd half Surprised with how poor Bradford were but Glatzel now looks very much the player everyone hoped he would be.
Moving the ball quicker made a big difference for Rovers after a laboured 1st half.
Now need to back this win up on Saturday #TRFC

'Kinell, hard to pick MOTM from that 2nd half but I reckon it goes to Glatzel.

Never stopped chasing and harrying, looked 10x the player from a few weeks back and took his chance when it arrived.

Despite his first goals for the club only coming earlier this month, Glatzel now stands as Tranmere’s top goalscorer for the campaign with four.

The youngster, who has suffered a difficult time with injuries over the past two years, is also their joint-top assist-maker, with three.

It is a testament to his mentality that he took his early struggle at Prenton Park and fought for his chance, with it seeming likely until recently that he would be recalled to Liverpool in January.

He even made an appearance for the Liverpool under-23s in October, and it appears a goal and assist in that 3-0 win over Arsenal at Anfield gave him the confidence needed to return to Tranmere and finally prove himself.