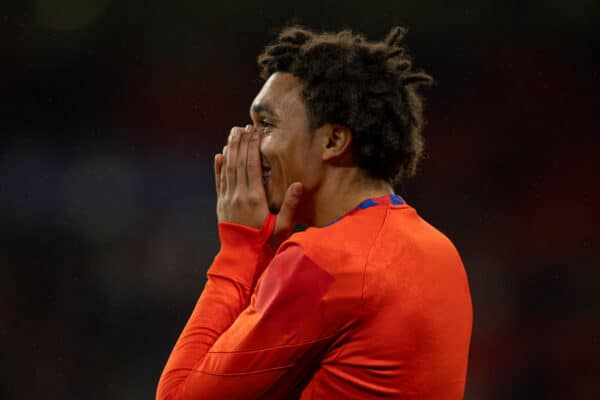 It was a prolific day at the office for Trent Alexander-Arnold in more ways than one, with a hat-trick of assists arriving in one of England’s biggest wins in history.

San Marino were the opposition for the Three Lions on a night where only one point was required to secure automatic qualification for the 2022 World Cup, but they did more than just that.

Alexander-Arnold was named at right wing-back in a much-changed side from the one that easily dispatched Albania three days prior.

There were seven changes in total with Aaron Ramsdale making his debut and Emile Smith Rowe handed his first start, but there was only ever going to be one victor and it was England.

The final scoreboard read 10-0 with the first six arriving in the opening 45 minutes, but it was the last three that had one thing in common: an Alexander-Arnold assist.

The first arrived from a dead ball outside of the area that was swung perfectly onto the head of Tyrone Mings for his maiden England goal, the next was for Tammy Abraham that arrived from an open play cross into the box.

And the hat-trick of assists was completed just a minute later with Bukayo Saka the benefactor of another perfect looped ball close to the goal that came as a result of the right-back drifting in-field.

The rout was then complete and with it a place in the World Cup in Qatar was secured in what was Alexander-Arnold’s seventh full game for his country.

Much continues to be made over his role, or lack thereof, for Gareth Southgate and the England manager was pleased with what he saw from the Liverpool man.

“For him to have an enjoyable England night is important. He showed some fabulous quality with a couple of assists,” he said.

“I’m really pleased for him that he will go back home feeling a big part of what has happened.”

And thankfully — unlike Andy Robertson, Sadio Mane and Jordan Henderson — Alexander-Arnold will return to Liverpool without a fitness cloud hanging over his head after 103 minutes of action with England.