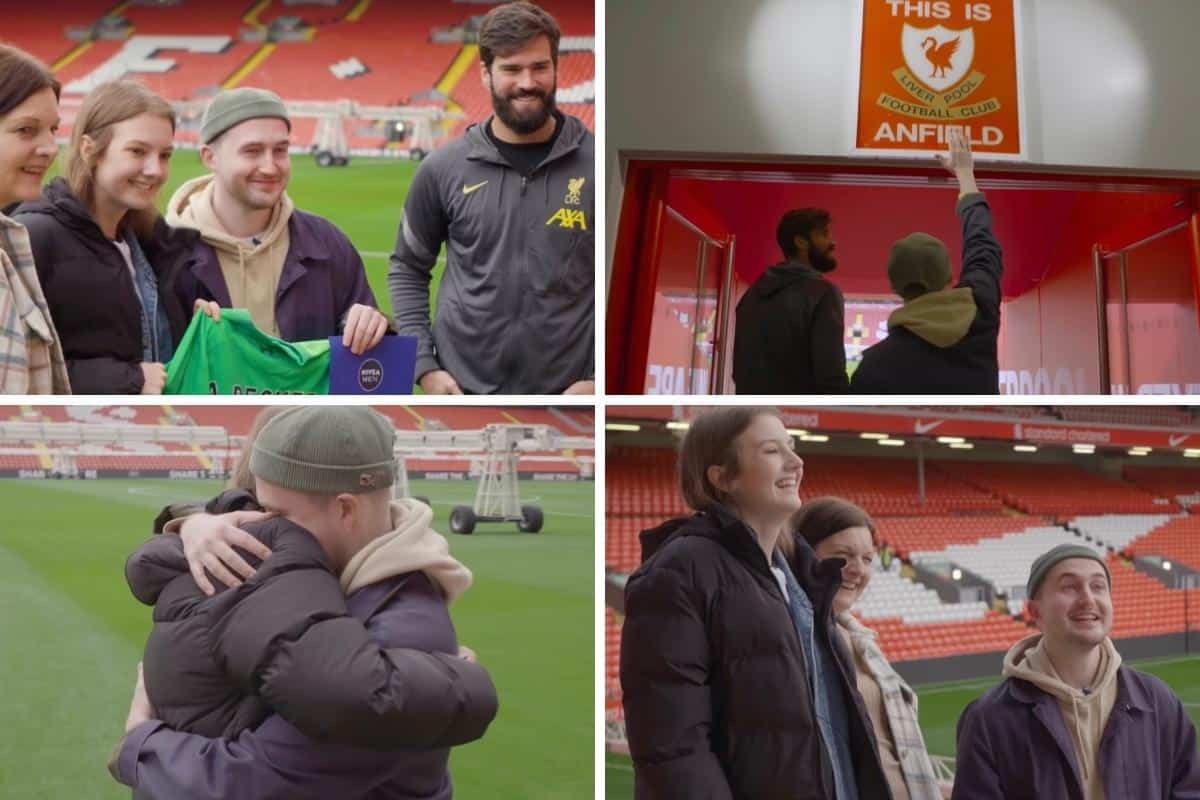 Liverpool fans were left overcome with emotion as die-hard supporter Ethan met the girl whose life he saved with a bone marrow transplant, with a surprise in store.

Through their partnership with Nivea Men, the club have made a number of incredible gestures to deserving supporters, with Virgil van Dijk, Jordan Henderson and Thiago among those involved over the years.

This time around, it was Alisson‘s turn to surprise lifelong fan Ethan, who was at Anfield to meet Libbie, who recovered from leukaemia following a successful bone marrow transplant.

It was Ethan who saved Libbie’s life, and her family contacted Liverpool in a bid to show their thanks for an incredible act of kindness.

As Ethan sat waiting for what he believed to be a tour of the stadium, Alisson walked past and, showcasing his acting talents, posed for a photograph with the supporter before revealing why he was actually there.

Alisson joined Ethan, Libbie and her mum Susan on the pitch at Anfield, as they discussed the impact of Ethan’s lifesaving donation.

“He really saved my life,” Libbie told Alisson. “I owe the world to him.”

It is impossible not to get emotional watching the video, with Ethan in tears as he read a letter from the club, offering him a VIP experience on a future matchday at Anfield.

Not only that, but Nivea Men are also using their pitchside advertising to raise awareness for the Anthony Nolan charity for leukaemia and hematopoietic stem cell transplantation, along with paying for student nurse Libbie’s accommodation for the year.

“It was a really big pleasure for me to meet you, and be together in this special moment for you guys,” Alisson told them.

An amazing, feel-good video, the response from supporters was emphatic, with many touched by Ethan and Libbie’s story:

What a beautiful story ???

How do you define You’ll Never Walk Alone? ?#LFC #YNWA

Absolutely fantastic from everyone involved. Libbie & Ethan are stars. She’s got Liverpool blood in her now so she’s no choice but to follow the reds. Liked that bit lol

These videos always make my day. Well done Nivea and LFC and of course Ethan.

Amazing! What a club.

We can’t like this enough!! Huge thanks to everyone involved in making this happen – a really special moment that we all will treasure. ?

* To find out more about the Anthony Nolan charity and help save a life like Ethan, go here.