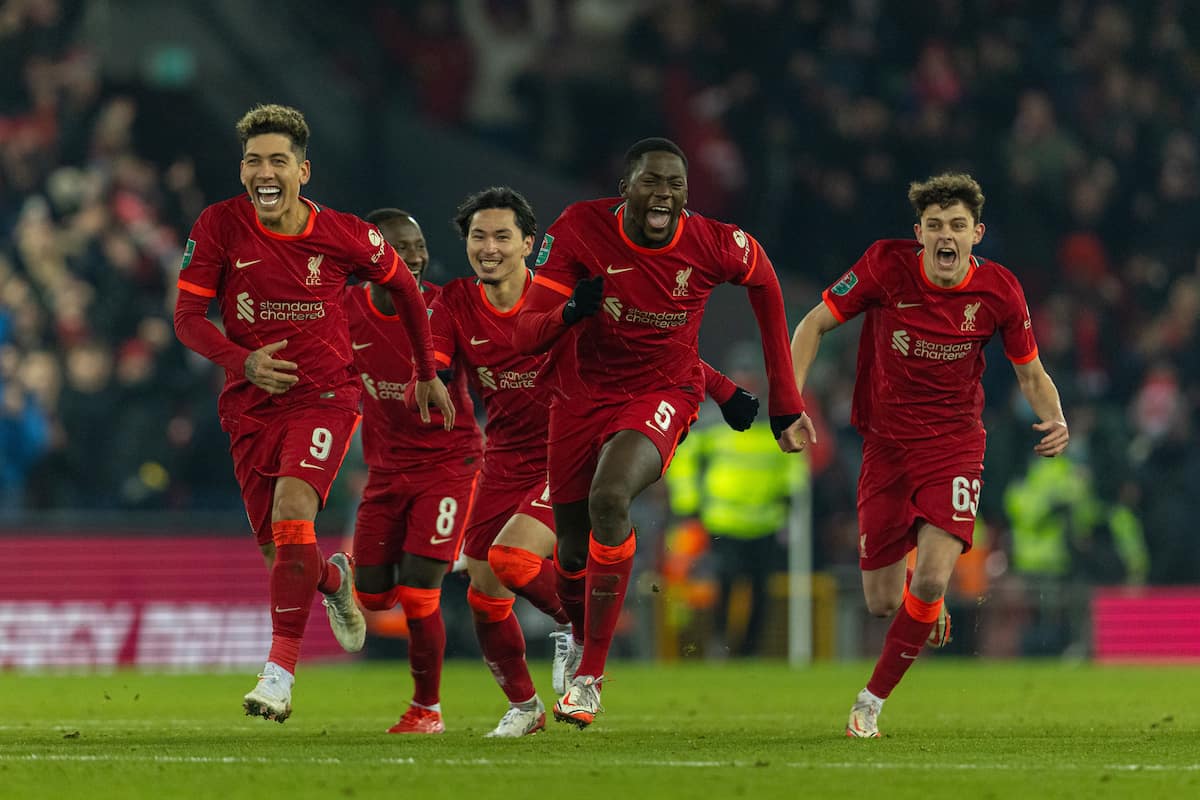 Liverpool came from behind in a thrilling cup tie to send Leicester packing and Jurgen Klopp‘s Reds into the League Cup semi-final, and Reds thoroughly enjoyed the victory.

While Leicester’s team was shrouded in mystery after two postponed games, it was clear that rotation was the order of the day for Liverpool.

The unfamiliarity and rustiness of the XI made for plenty of errors and Jamie Vardy cashed in and James Maddison added another.

Senior faces would make it more of a contest in the second half and Diogo Jota injected renewed belief to make it a real cup tie, with Takumi Minamino then taking it to penalties at the death.

Hearts were in mouths but two saves from Caoimhin Kelleher and five penalty conversions sealed a win that looked out of reach early in the first half and it left Reds overjoyed:

Up the penalty shoot-out Reds

Hahahaha that was absolutely mental!

Never ended up caring so much about a game I had little interest in.

Off you go, you horrible, nasty Leicester fans.

SUCK ON THAT LEICESTER YOU FAKE COVID PRICKS!!! GO ON ANOTHER HOLIDAY! #LIVLEI

What the actual fuck?

Teams shamelessly time wasting only to go on and lose the game may be my favourite thing ever.

Liverpool through on pens after trailing 3-1.

Hard to find words that sum that up. Heroes young and old.

Not the most important competition for #LFC. But against the odds this team delivers again. This was a HUGE game for a Leicester team who’d had weeks to prepare and get injuries sorted. Klopp puts out a team nobody thinks can win but… we win. Mentality monsters.

The Anfield atmosphere was widely appreciated…

Tell you what, I know the competition doesn’t mean as much, but I’ve been to all of the big Klopp Anfield nights and this atmosphere is RIGHT up there.

No matter what happens in the penalties, can we take a moment to appreciate this Anfield crowd? It's been absolutely electric! You'd swear this was a European tie. #CarabaoCup

Don't care if we go out. That was a brilliant second half. Anfield absolutely superb tonight ?? Never beaten ?

Tonight was an advert for why supporters have to be in the ground. Football is soulless without it, almost hollow. That Anfield crowd was sensational and clearly made a difference.

A brilliant cup tie ?? You can’t deny there is something special about Anfield #LFC @Carabao_Cup

Anfield atmosphere has been unreal tonight ???

This team squad stadium never ceases to amaze me!!Their Character was immense,and that Anfield SPIRIT was there to be seen.Never give up?ynwa

And there were plenty of positives to revel in…

that was all the more excellent with the equaliser coming over 5 mins into stoppage time which were pretty much all as a result of leicester's constant, incessant time-wasting. visibly wilted as that half went on.

All the subs made a big difference. Konate made us far more secure in defence, Milner using his experience, Jota a constant threat and Keita was brilliant picking up the ball and probing and creating. Young Beck won't ever forget his late cameo to rest Tsimikas' legs.

Keita was absolutely immense when he came on and changed the game. Konate, Milner and Jota boss but special mention for Naby. #LFC

“This teams mentality is ridiculous. Never give up.”

Major shades of the Arsenal 5-5 there. Game looked beyond us on a couple of occasions, but we battle back with a last-minute equaliser and win the shoot-out courtesy of some Kelleher heroics. And once again you're left wondering how we've managed to get through ?

That was way more enjoyable than I expected it to be, What an incredible prospect Kelleher is. And some great performances in second half, particularly Keita.