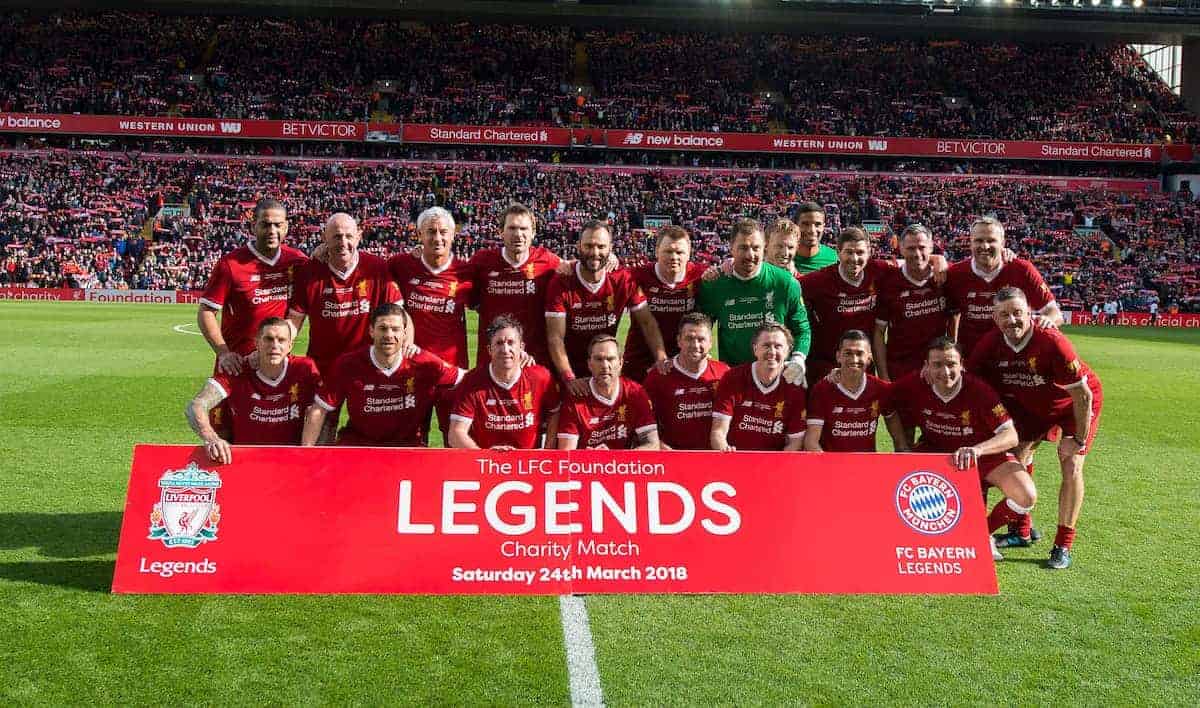 Liverpool FC Legends will host Barça Legends in a long-awaited tie, as the LFC Foundation Official Legends match returns to Anfield for the first time since 2019.

The Official Legends charity match, presented by AXA, will take place on Saturday 26 March 2022 at Anfield to help raise vital funds for the LFC Foundation.

A host of the club’s footballing legends will be welcomed back to Anfield to play on the hallowed turf, including Jason McAteer, Luis Garcia, Jerzy Dudek, Bjorn tore Kvarme, Vladimir Smicer, Phil Babb, Patrik Berger and Steve McManaman. Barça legends Javier Saviola and Edmilson will also be in action on the day, amongst many others.

The Legends game is a marquee moment in the LFC Foundation calendar, with proceeds from the match going to LFC Foundation, which aims to create life-changing opportunities for young people and families, and a proportion will be donated to Barcelona’s official charity, the Barça Foundation.

Money raised from Legends games helps to fund a variety of projects for LFC Foundation and its charity partners, including its Employability and Training programmes, and Health and Wellbeing programmes, with a focus on mental health. These are particularly vital projects, which play a huge part in LFC Foundation’s COVID-19 recovery support. 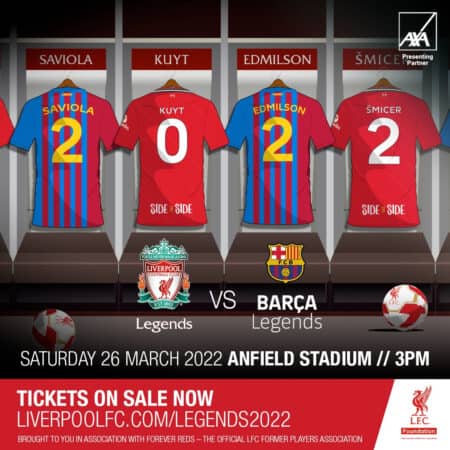 This year, funds will also go towards supporting Forever Reds, the club’s official former players association, which provides support to the club’s former players in need of care particularly during the later stages of their lives. The Owen McVeigh Foundation, which provides life changing memories for children and their families in Merseyside fighting cancer, will also be supported by monies raised from the game.

LFC Foundation also supports international initiatives overseas through its Side by Side partnership with Right To Play. These programmes are delivered both here in Liverpool and internationally, using the power of sport and play to teach key life skills to some of the world’s most underserved communities.

Liverpool FC former player, Steve McManaman said: “It’s good to be back and be preparing to walk out on that very special pitch to face some of Barcelona’s greatest players. It’s always a very nostalgic feeling being back at Anfield, and one that evokes so many memories and emotions – I absolutely can’t wait to get back out there, particularly after our last charity match against Barca was postponed due to the pandemic. But we’re back, and we’re ready to go again. And I know our supporters will be just as eager to come along and show their support.

“We hope to create another fun, entertaining yet competitive game at Anfield for our fans, while helping to raise vital funds for the club’s official charity.”

Matt Parish, Chief Executive, Liverpool FC Foundation, said: “It’s really exciting to be able to confirm our next charity match and welcome everyone back to Anfield, especially after the difficulties of the last 20 months and sadly having to cancel our previous charity game as a result of the pandemic.

“Our charity games are always such fun-filled family occasions where fans can see some of their favourite Legends back at Anfield, whilst helping to raise funds for the Foundation’s work, supporting children, young people and families in our local communities and beyond.”

Tickets are on pre-sale now for all season ticket holders and official members, with the general sale for all other supporters starting at 3pm today.

There will also be a pay per view option available for those who would prefer to tune into the action from home, with more details to follow.