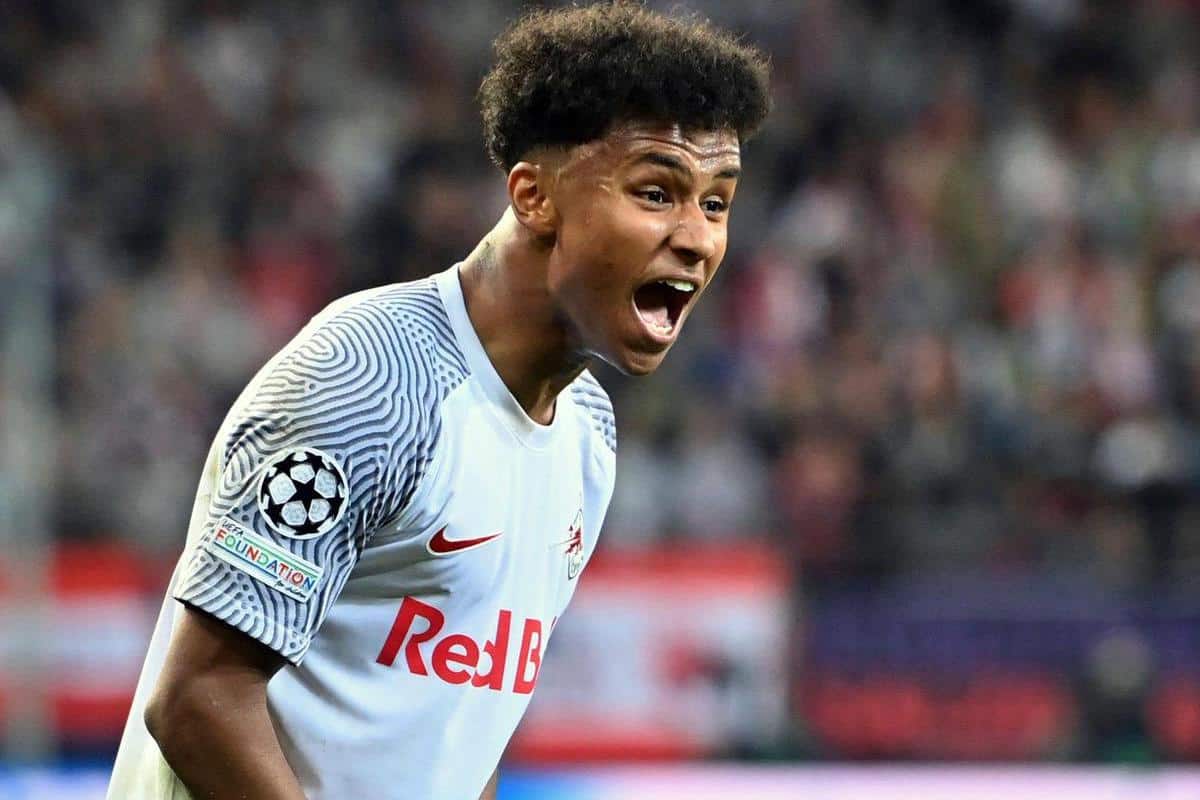 Liverpool are one of a number of clubs who have been linked to the 19-year-old, but the striker has said that he’ll “still be at Salzburg next year” as he swatted aside transfer talk.

With 18 goals in 28 appearances for RB Salzburg so far this season, it comes as no surprise that a long list of suitors are tacking Karim Adeyemi’s every move.

Liverpool are considered to be among the chasing pack alongside the likes of Bayern Munich, PSG, Barcelona and Borussia Dortmund, with the latter reported to be the front runner.

But after Adeyemi netted his first career hat-trick after coming off the bench at half-time in Salzburg’s 5-0 rout of WSG Wattens on Saturday, focus swiftly turned to his future.

And the teenager was insistent that no deal had yet been agreed as he remains fully focused on Salzburg, who could be drawn against Liverpool in the last 16 of the Champions League.

“As is so often the case, nothing is decided yet. And, as I have said, I’ll also be at Salzburg next year, and that’s where my focus is on,” Adeyemi told Sky TV.

“As I have said, I have no tendency,” he added. “My mind is here at Salzburg and I’m looking forward to the Champions League with Salzburg. We want to give our all there.”

It’s not surprising to hear words such as these for a player subject to mass transfer speculation, but the common consensus among German sources has been that he will “definitely” move on in 2022.

A fee in the region of £30 million has been touted, but the pathway he chooses for his career is unclear – but the stepping stone from Austria to Germany is a well-trodden journey.

Salzburg has been the springboard for Erling Haaland and Liverpool duo Sadio Mane and Naby Keita, who Adeyemi namechecked at the start of the month when asked about his next steps.

“It’s true, in recent years a lot of young people have matured in Salzburg and then joined the best international clubs,” Adeyemi told Tuttosport.

“I am thinking of Erling Haaland, but also of Sadio Mane and Naby Keita of Liverpool. Or Dominik Szoboszlai, who moved to Leipzig.

“Obviously, I also have this goal: I would like the next stage of my career to be in a top club.”

At 19, Adeyemi would represent the next generation and with Liverpool’s forward line to undergo a gradual evolution under Jurgen Klopp, the Reds cannot be ruled out of the running for the German international.