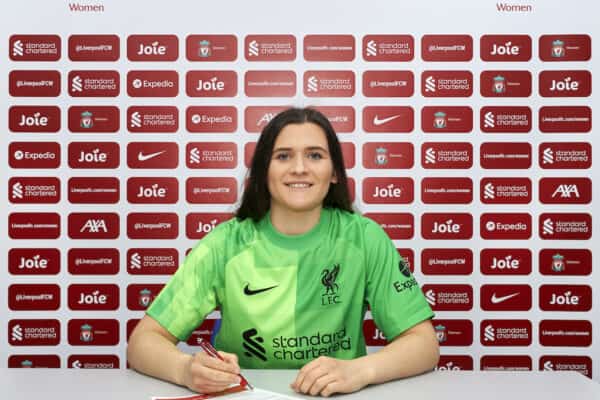 The 21-year-old joins the Reds from Derby County Women who are currently top of the National League North.

The goalkeeper made her first start for Derby at 16, joined Leicester when she was 17 and won a promotion, before joining Stoke Women.

It was there in 2020 that she earned her call up for the England U21s squad before returning to Derby for the past two seasons. Clarke was dual registered with Aston Villa Women last season and trained with the Women’s Super League team regularly.

LFC Women goalkeeping coach Joe Potts said: “For a young keeper, Charlotte has a lot of playing experience which is obviously valuable.

“With the situation we have in the goalkeeping department, it’s important we have someone who can slot into game time if we need them but also has the potential to push on and that’s what we get with Charlotte.

“So I’m excited to see how she develops over the next few months.”

Clarke joined her new teammates in training last week and while she is available for selection immediately, her contract with the Reds will formally begin on January 1 with the opening of the transfer window.

Clarke said: “It feels absolutely surreal to be here – it’s Liverpool, the biggest club in Europe and I’m absolutely amazed and thankful to be here.

“To be thought of to come here is incredible and such an honour.

“My family were ecstatic for me. I’ve spent a season and a half at Derby and I started off at Derby Women so it holds a special place in my heart.

“So it was a tough decision to leave but I really want to push on and get to the top and I really feel that Liverpool can do this. It’s a great opportunity which I’m going to take with both hands.”

Clarke will join a goalkeeping unit that includes Rachael Laws and the currently sidelined Rylee Foster.

Liverpool FC Women return to action next Sunday with a Women’s FA Cup tie away at Burnley.