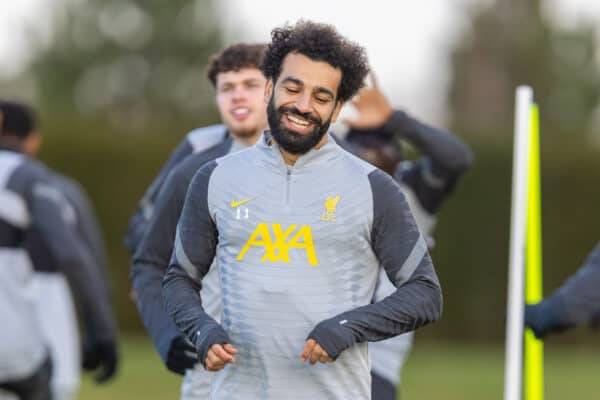 No Thiago, Jota or Henderson as Liverpool train for AC Milan trip

Liverpool went through their final preparations at Kirkby on Monday afternoon ahead of the last Champions League group game at AC Milan, but Jordan Henderson, Diogo Jota and Thiago were not present.

Jurgen Klopp oversaw a 25-man squad just two days on from the Reds’ last-gasp win over Wolves, and ahead of their sixth game in the space of 17 days.

The schedule is one that is expected to see the manager ring in the changes at San Siro having used his strongest possible XI in the last three league fixtures.

Henderson, Jota and Thiago were not out on the pitch with the rest of their teammates, but after three successive starts for the trio their second recovery day could be taking on a different look.

But expect Klopp to provide an update when he fronts the press on Monday ahead of the trip to Italy, but he’ll be more than content with how his squad is shaping up.

The return of Naby Keita and Joe Gomez from the treatment room could see the boss look to the duo from the start, but he has plenty of options elsewhere to keep his side fresh.

Saturday’s hero in Divock Origi is one such player, as too the likes of Neco Williams, Kostas Tsimikas, Ibrahima Konate, Takumi Minamino, Tyler Morton and Alex-Oxlade-Chamberlain.

James Milner, unfortunately, cannot be one of those names due to picking up a suspension against Porto, while Curtis Jones, Roberto Firmino and Harvey Elliott remain unavailable.

And with those options up his sleeve, the likes of Virgil van Dijk, Thiago, Andy Robertson, Trent Alexander-Arnold, Sadio Mane and possibly even Mohamed Salah could be taken out of the XI.

In terms of youth in training, the Reds had Conor Bradley, Elijah Dixon-Bonner in their ranks alongside Morton on Monday afternoon.