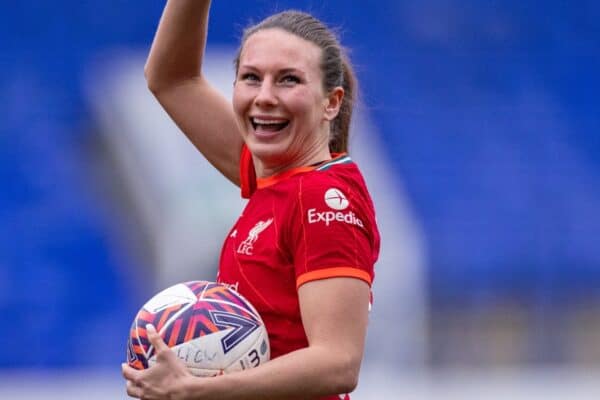 Liverpool FC Women’s defender Leighanne Robe had never scored for the club prior to Sunday’s FA Women’s Cup clash with Lincoln, but then netted a hat-trick in a 6-0 win.

Robe joined the Reds from Millwall in 2018, and has progressed into a key figure for a side that has endured ups and downs throughout her time on Merseyside.

A leader for Matt Beard’s revitalised Liverpool, the 28-year-old has made 14 appearances so far this campaign, with Liverpool currently top of the Championship and now, after a 6-0 win over Lincoln, into the fifth round of the FA Women’s Cup.

That clash with Lincoln at Prenton Park saw Robe bring a long wait for a goal to an end – in remarkable fashion, as she struck three times in 21 minutes to clinch a most unlikely hat-trick.

It was Robe who opened the scoring in the 40th minute, powering home Carla Humphrey’s lofted free-kick with an unstoppable header, having already laid on a chance that saw Leanne Kiernan hit the bar.

Robe then doubled hers and Liverpool’s lead with another header from a Humphrey corner, with Katie Stengel then making it 3-0 before the break.

Incredibly, Robe then hit the crossbar with one more headed effort, before Meikayla Moore’s hopeful crossed bounced embarrassingly over the Lincoln goalkeeper for the fourth of the afternoon.

A scramble in the penalty box – that saw Robe hit the post – then eventually led to Humphrey being felled, which gave Liverpool’s No. 3 the opportunity to step up and convert the spot-kick for her hat-trick.

Charlotte Wardlaw netted late on to cap a comfortable win, with Liverpool now through to the fifth round of the cup.

The afternoon was Robe’s, and the defender took to Instagram after the game to mark a special moment with her first goals for the Reds:

“When I’m popping up with a hat-trick you know the magic of the FA Cup is real,” she wrote.

“Happy to get my first goals for the Reds finally. Shoutout Carla Humphrey [for] assisting all three.”

In other news, wing-back Taylor Hinds has signed a new long-term contract with the club.