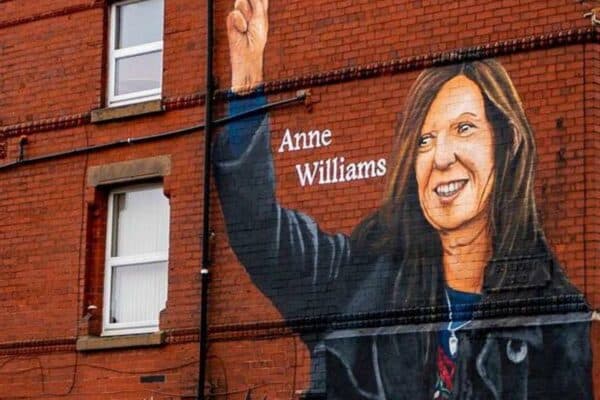 Liverpool fans have backed calls for the introduction of a Hillsborough Law, led by Labour MPs and officials, that would rebalance the scales of justice in the UK.

This comes in the aftermath of the recent ITV documentary Anne, which brought the wider impact of the Hillsborough tragedy back to the fore.

Levelling up cannot only be about big spending announcements and shiny infrastructure projects.

It should also about righting long-term, structural injustices. There are few bigger than this. Levelling the scales of justice *is* levelling up.

The fight for justice goes on – tomorrow.

For a more just country for everyone.

For a Hillsborough Law – now.

All too often justice seems to be a luxury of the rich and powerful. The victims of tragedies like Hillsborough and Grenfell deserve the truth to be heard and those lying to be held accountable. Join me from 1pm today in calling for a #HillsboroughLawNow pic.twitter.com/kVVFasWQhe

The Hillsborough Law would see the following written into UK law:

Speakers at the event on Friday included Hillsborough campaigner Margaret Aspinall, whose son James lost his life in the disaster in 1989, and Bishop James Jones.

It was Bishop Jones who published a report, ‘The Patronising Disposition of Unaccountable Power’, in 2017, reviewing the experiences of Hillsborough families at the hands of the justice system, which has fuelled calls for reform.

And while the event took place, many football fans took to social media in support of the Hillsborough Law Now movement:

I've not watched #Anne yet – building myself up to it – but I know from Twitter how well it has been received and I hope it proves to be a catalyst for #HillsboroughLawNow to successfully lead to the justice reforms needed in this country. https://t.co/PC28hoAvZK

Today sees the call for a ‘Hillsborough Law’ to rebalance the UK’s justice system and ensure fairer treatment for bereaved families. Anyone who has watched #Anne this week knows how important and long overdue that is. #HillsboroughLawNow

Watching the #HillsboroughLawNow event. Brilliant contributions already from @AndyBurnhamGM & @MetroMayorSteve – reminding us that the fight for justice isn’t over.

Never fail to be inspired by the hero that is Margaret Aspinall too – forever saying it as it is.

Stop public servants lying through their teeth (sometimes, in the case of @syptweet for decades) #HillsboroughLawNow ? pic.twitter.com/uI5hzCJt5d

Imagine losing a parent at #Hillsborough you & your sibling taken into care having a detrimental effect on the relationship with rest of your family & your life ahead of you is completely altered.
All because bizzies lied & labour and the Tories are corrupt#HillsboroughLawNow

Imagine needing a law that makes the Bizzies tell the truth.#HillsboroughLawNow

Watching #HillsboroughLawNow live on Facebook. Incredibly powerful speakers to listen to. I really hope and pray that this law is passed.

Everyone should support this. Nobody should have to go through such a battle for the truth again. History will repeat itself again without it #HillsboroughLawNow #JFT97 https://t.co/6AjTWC2dfk

This is more than football. It’s more than Liverpool vs the rest of the country. We need a Hillsborough Law and we need it NOW. #HillsboroughLawNow #JFT97 ???

#HillsboroughLawNow It is much needed to protect future families from suffering similar injustices to those linked to what happened in the past. We will never forget the mess that was left behind and how it was handled by the authorities at the time. #YNWA https://t.co/C8vywHRvGc

Togetherness is the spirit of this live #HillsboroughLawNow live stream. Bereaved families of tragedies. Broken survivors. And political colours of red and blue.

This makes a huge statement. Truth and accountability is the spirit of this law. Hillsborough Law Now is a must.

#HillsboroughLawNow Time for the authorities to be held to account so nobody else has to fight to right wrongs! pic.twitter.com/APyGdhZPLV

Justice for the 97. Hillsborough Law Now.