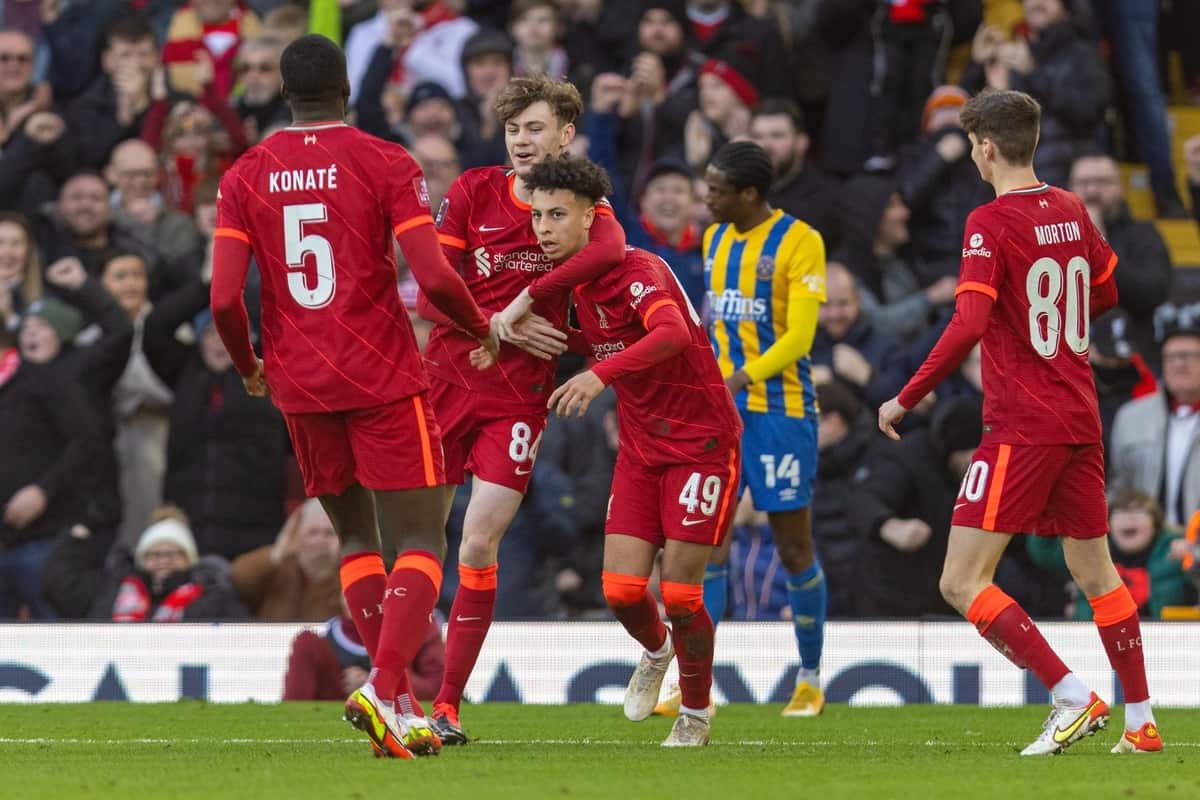 Liverpool won 4-1 at home to Shrewsbury in the FA Cup third round on Sunday, with Kaide Gordon‘s first, and historic, Liverpool goal the standout moment.

The Reds took on their League One opponents with a much-changed lineup, but the likes of Virgil van Dijk, Andy Robertson and Fabinho all started.

Daniel Udoh stunned the hosts when he fired Shrewsbury in front, but Liverpool’s response was quick, as Gordon showed great composure as he became the club’s second-youngest goalscorer with his maiden goal.

There was still time for Fabinho to get his second of the afternoon in stoppage time, as Liverpool progressed at a canter.

Here’s how supporters reacted to the Reds’ win on Twitter, Facebook and This Is Anfield’s comments section.

Many were content with what they saw, even though it wasn’t a classic…

Good afternoon all round. Minutes for key players and always nice to see so many youngsters involved. Bradley, Morton, Dixon-Bonner and Gordon all solid. A 17 year old scoring in front of the Kop is what it’s all about.

A very young and much changed Liverpool side deservedly into the 4th Round of the FA Cup, the few available senior players sharing their experience with some very promising talent.

Fabinho’s got the goal hunger now…

It’s definitely not harsh on Shrewsbury

FT: Fabs with a boss brace, loads of debut performances and an all around good effort from the squad. Minutes in the legs for Robbo (hope he’s okay) & Bobby & Fabs. Hopefully even more lads healthy for Thursday. Up the Mighty Reds! #EmiratesFACup #LIVSHR #YNWA

There was lot of praise for Gordon, as well as some fellow youngsters…

What a performance by Kaide Gordon today!

He's going to be something special! pic.twitter.com/iwzh7MX1H7

Huge applause from Anfield and players as well as Kaide Gordon comes off. Great talent him.

Just before Xmas Pep Lijnders said Jurgen Klopp chooses to have a "small" squad as a "strategic decision" to allow space for youngsters to progress.

18 days later and Kaide Gordon becomes the youngest ever player to score for #LFC in the FA Cup.

Positives even in adversity…

Connor Bradley was very, very good at right-back. Needs time and a bit more muscle but can see why he is so highly rated.

“Gordon is going to be one special player, would be nice to see him get some minutes with the 1st team, to see how he adapts.” – Jason Rowlands on Facebook.

Took his goal really well. But the way he was getting back and helping Bradley was the most pleasing thing about Gordon’s performance there today. Got the lot going forward. Just needs time to keep developing

Deserved ovation there for Kaide Gordon. What a player #LFC

? All the #LFC youngsters did well this afternoon, but Tyler Morton the best of the bunch. So classy on the ball and looked great next to Fabinho. A real talent.

Really, really like the look of Tyler Morton – there's an element of Busquets about him, without putting too much pressure on him!

So composed and intelligent for his age, on and off the ball. Looks a gem.

Fabinho also received plenty of love after his brace…

Fabinho has now scored as many goals as fellow Brazilian Richarlison this season ??

Konaté got his first assist for the club and Fabinho his first brace.

Fabinho with his first brace! Really is the magic of the FA Cup ?

Fabinho MOTM today. He was superb.

And attention turned to the League Cup clash with Arsenal…

Jota, Bobby and Fabinho up top for Arsenal then, yeah?

That was a much needed watch. Onto the fourth round. And bring on Arsenal on Thursday. Up the Reds.#LIVSHR #FACup

Can't be too critical of that performance having being without training, injuries and COVID issues. Expect to get back Trent, Alisson, Ox, Jota and Hendo for mid-week tie against Arsenal. #LFC #LIVSHR #FACup

Boring for most parts but a decent enough performance to move onto the next round. Kaide, morton and bradley were good today. Onto arsenal!