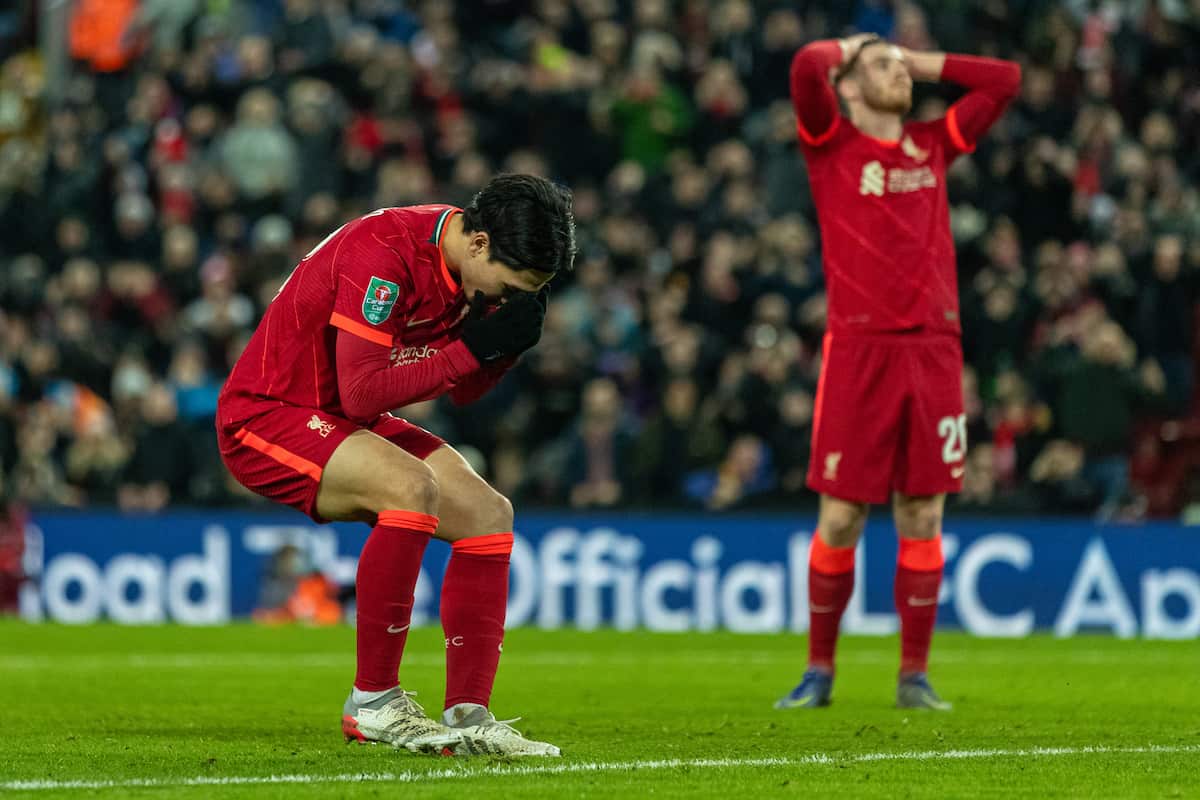 The Reds were set up as strong favourites for the first leg of their League Cup semi-final, particularly after the teamsheet revealed a near full-strength side.

Mohamed Salah and Sadio Mane were absent, along with the injured Thiago, but otherwise, it was close to the lineup that Jurgen Klopp would turn to every week in the Premier League.

Against an Arsenal squad depleted by injuries, international absences and COVID-19, Liverpool were give another boost in the first half as Granit Xhaka was sent off.

But as the Gunners sat deep and dug their heels in, the Reds were unable to find a break and drew 0-0, with Minamino squandering the best chance of the game as he skied an effort over on an open goal.

The all-round performance was “painful”…

Absolute drivel that, no other word for it. Miles off the pace, far too many players poor.

At least it's only the League Cup, I guess. That's all I've got.

There’s a team that has a man advantage for over an hour and the fact you don’t know which side it is sums up the game. Liverpool so pedestrian. No creativity and so little threat. Did Ramsdale even have a save to make?

Does Klopp get his teams on the Stout in Jan every year? #Slow

Some nights you get what you deserve and both teams did tonight. Xhaka did them a favour, they didn’t need to try and play like they usually do.

Sorry to be the bearer of bad news, but we’ve got another 90 minutes of this to watch next week.

We are going through a slump

Liverpool have absolutely stunk the gaff out tonight. Curtis Jones and Matip the only bright sparks #LIVARS

Horribly blunt. Going to be a long month without Mane and Salah.

But it was Minamino’s miss that hurt the most…

Taki I love you bro, but you simply have to score that

Minamino just blasts the ball over the bar from an open net. Embarrassing.

That's an horrendous miss by Minamino.

I'd love to know what Minamino can do that Kaide Gordon couldn't have. Might have actually learned something from the game as well.

Minamino had to have a good game today but other than frantic energy and one or two moments he hasn't. He scored the key equaliser last round but that covered up what was not a good performance. Had some decent matches vs weaker opposition earlier in cups but doesn't do enough.

Minamino with a woeful miss but it would only have papered over a really, really poor performance. I think even Arsenal fans would have been bracing themselves for a two or three-goal defeat after the red. Not a disaster, but they're arguably favourites now.

It is far from over for Liverpool, with a trip to the Emirates to come now next week and with Arsenal adding the suspended Xhaka to a long list of absentees.

But on the evidence of their performance on Thursday night, there could be concerns over the Reds’ chance of making it to Wembley – and, perhaps, taking three points from Brentford on Sunday.

Minamino is clearly a player who struggles for confidence, as he has found himself on the fringes throughout his time with the club.

Klopp’s task now is to help restore that – as the No. 18 could be needed again next week.