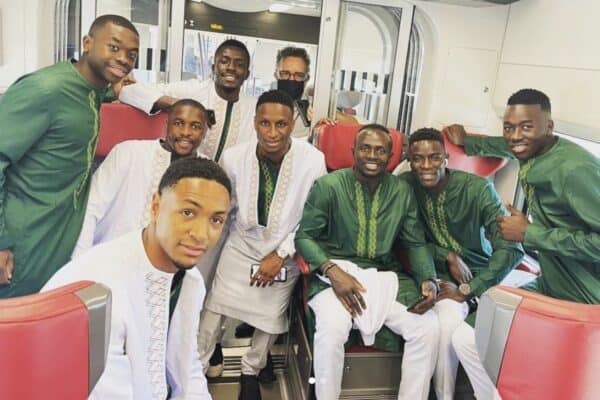 Sadio Mane has joined the Senegal squad ahead of this month’s Africa Cup of Nations, but their flight to Cameroon has been delayed by nine positive cases of COVID-19.

Mane is one of three Liverpool players on duty at the tournament in Cameroon, with Mohamed Salah and Naby Keita also away with Egypt and Guinea respectively.

Their absence was expected to be an issue for the Reds during a busy run of games across the Premier League, League Cup and FA Cup in January, but a Covid outbreak among Jurgen Klopp‘s squad has cast doubt over fixtures going ahead.

Meanwhile, Senegal were forced to delay their flight from Dakar to Douala until Wednesday, after results from PCR tests returned a total of nine positive cases.

In a photograph shared by Mane on Instagram, the Liverpool forward could be seen posing with Mendy on a train, along with six other team-mates who have so far tested negative.

The squad flew to Cameroon on Wednesday morning, with Mendy, Sarr, Thiam and the six staff members affected set to rejoin the group in Bafoussam upon the return of negative PCR tests.

It is another setback for Senegal as they head into the AFCON, with their FA accusing Senegal of refusing to release Ismaila Sarr for duty with the winger sidelined with knee ligament damage.

Sarr has now joined the national team for tests on the injury, though it seems unlikely he will be fit to feature considering he has missed the last six games for his club.

The rapid spread of the Omicron variant of Covid could see further cases emerge within the Senegal camp, with it almost certain the tournament is impacted by absences.