Liverpool have seen all three Africa Cup of Nations representatives progress to the knockout stages but, unlike Mo Salah and Sadio Mane, Naby Keita will play no part in the last 16.

Guinea, Senegal and Egypt all amassed enough points in the group stage to prolong their stay in Cameroon, ensuring no early return to Liverpool.

Only Mane’s Senegal would qualify as group winners, with both Guinea and Egypt securing their passage to the last 16 as runners-up in Group B and D respectively.

But while Liverpool’s No. 10 and No. 11 aim to play a key role in guiding their countries to the next stage, Keita will have to anxiously watch on from the sidelines due to a suspension.

Why can’t he play? 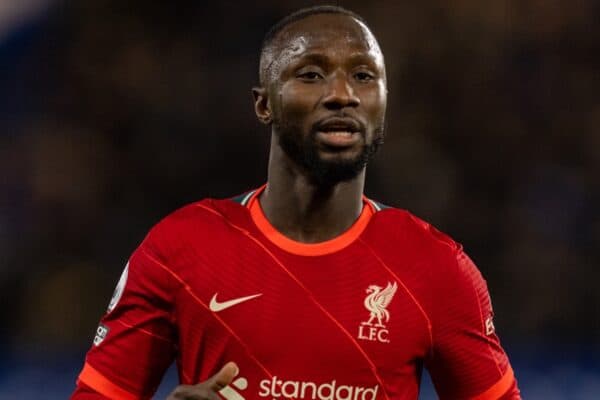 The Guinea captain is suspended for one match after picking up two yellow cards across the three group games, meaning he misses the crucial game against Gambia.

Notably, the first caution was from a challenge on Mane in his second game of the competition when Senegal and Guinea played out a 0-0 draw.

And the second came in the dying stages of the defeat to Zimbabwe in the final group match after he attempted to lift goalkeeper Talbert Shumba up from the turf amid protests that they were running down the clock.

Aside from the two decisive yellow cards, Keita has enjoyed an eye-catching tournament to date with two Man of the Match displays, against Malawi and Senegal.

Liverpool’s No. 8 also highlighted how effective he can be in front of goal with a rocket of a finish against Zimbabwe.

His efforts saw him named in the best XI in the group stage by The Confederation of African Football, with Salah and Mane listed on the substitutes bench.

What has been said

Guinea manager Kaba Diawara was understandably disappointed to lose his captain and star player, but now it’s time to “do it for him.”

“He’s often been injured for the national team, and it’s a loss,” manager Diawara told ESPN.

“But we just have to do without him. We’ll play the last 16 for him. He’s given a lot since the first match, and he’s now at an age where he should be among the best players at the AFCON.

“He wants to prove it, and he can show that… if we get to the quarterfinals. He had two superb games, scored a goal, and is currently at a great physical level.

“He’s our best player, so we’ve got to do it for him, but it’s sad news. We have a squad of players, and this is what it’s for.”

Guinea, Senegal and Egypt play on successive days at the start of the week: