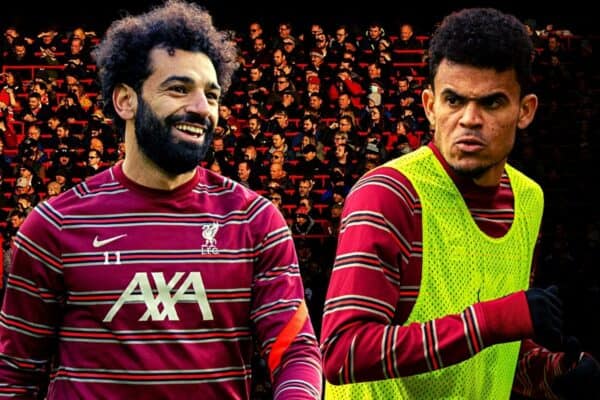 2 Liverpool lineups vs. Burnley as Mo Salah and Luis Diaz decisions made

Jurgen Klopp faces arguably his toughest selection decision in years as he works with a fully fit Liverpool squad for Sunday’s trip to Burnley. So who should start at Turf Moor?

The Reds head to Lancashire this weekend looking to make it six wins in a row in all competitions and maintain their title challenge in the Premier League.

They come up against a Burnley side without a win in 11 and having played five games fewer than many other sides, but have also held both Arsenal and Man United to draws among their last three outings.

Klopp is expecting a “proper fight” at Turf Moor, but Liverpool should take confidence into the tie having dismantled Leicester so comfortably on Thursday night.

And with injuries a distant memory at Anfield, the manager is spoiled for choice when naming his XI.

For once, Klopp has been given a clean bill of health throughout his squad, as he told reporters on Friday:

Though there is a full complement of players at Klopp’s disposal, there are still a couple of hints as to how Liverpool could line up on Sunday.

For one, there is a likelihood that, as with Mo Salah on Thursday night, Mane will not be considered in contention for a starting place.

The Senegal captain only returned to full training on Friday, with Klopp admitting that the club’s medical staff “have to see how intense it was for him” after playing almost every minute of every game at AFCON.

That opens up the prospect of Luis Diaz retaining his place in the side after an explosive full debut against Leicester:

However, Klopp could look to shake things up further due to the strength of the squad available to him, with the turnaround between Thursday night and 2pm on Sunday a short one.

The likes of Joel Matip, Fabinho and Thiago could be rested ahead of the Champions League last-16 clash with Inter Milan on Wednesday night, with rotation likely:

With those alterations, including the same midfield that started against Burnley in August, the Reds could take to Turf Moor as below:

That both of those lineups would leave Oxlade-Chamberlain, Roberto Firmino, Curtis Jones, Kostas Tsimikas, James Milner, Divock Origi, Takumi Minamino and Joe Gomez out is a testament to Liverpool’s strength.

It is a rare situation that Klopp will embrace. Though despite that, it still seems likely that few changes will be made for a tough clash with Burnley.