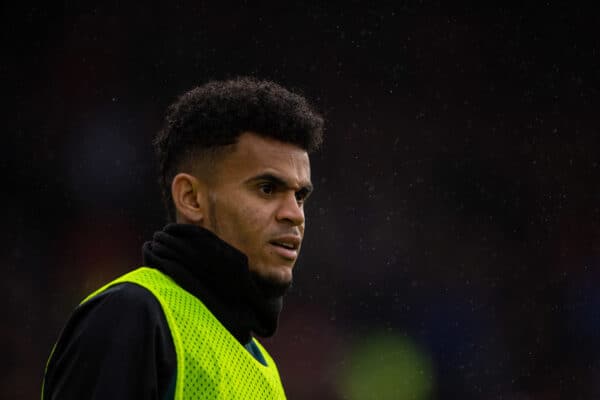 It’s straight back into Premier League action for Liverpool three days on from the San Siro victory, and changes are surely on the cards for Jurgen Klopp against Norwich.

The Reds took a Diogo Jota-sized hit in midweek, with the forward now on the sidelines for an undetermined amount of time, but Klopp does have options at his disposal up top.

Confidence will remain high after seven wins in a row and a return to Anfield now beckons with Norwich the visitors, who are stuck in a fight for their Premier League survival.

Liverpool have already met the Canaries twice this season, in league and cup, and both occasions ended with a convincing 3-0 win.

Dean Smith is now in charge and knows Norwich need to “come up with some tricks where they can,” and a windy afternoon means the Reds will need to be on their toes.

Here is how the Reds could lineup on Saturday.

After a couple of weeks of the entire squad being fit and healthy, it’s not exactly the case ahead of the weekend’s fixture:

Although the injury to the in-form Jota is far from ideal, Klopp knows he still has plenty of firepower in his attack, one that remains full of fresh legs.

After an intense battle in Italy, the manager will make changes, likely across each department in what would still be a strong side:

It would make for six changes from the win at Inter, with the Reds to look like this:

While Norwich will not be underestimated by Klopp and co. the fixture presents a valuable chance to rest Virgil van Dijk and see a Matip-Konate partnership at the back.

Trent Alexander-Arnold could similarly do with a break but a planned substitution at the hour-mark could instead be the favourable option, with Joe Gomez taking his place.

There will then need to be a decision over Mane, who has started back-to-back games following his Africa Cup of Nations exploits, with Diaz breathing down his neck:

Those tweaks have Liverpool lining up as follows:

With the strength in depth at Liverpool’s disposal, any changes from midweek make for a strong side and one more than capable of getting the job done against 18th-placed Norwich.

Leeds in the days to follow and with the League Cup final on the horizon, Klopp will be eager to manage his squad accordingly and the injection of fresh legs will keep the momentum rolling.