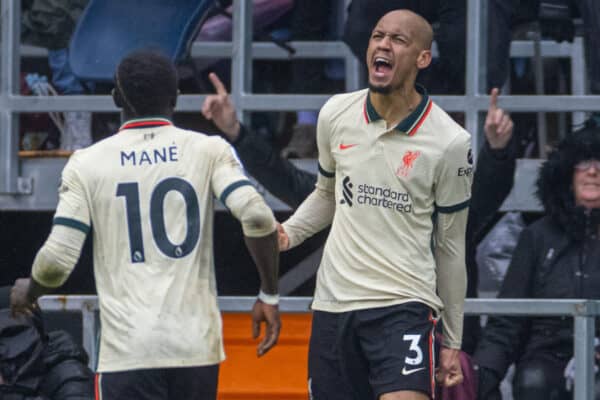 It was a cold, wet and windy afternoon in Burnley, but Liverpool came away with all three points thanks to Fabinho‘s first-half goal.

Liverpool’s new-found squad depth was on display when the teams were announced, with an extremely strong bench for the Reds featuring Diogo Jota, Luis Diaz, Thiago and Harvey Elliott.

Jurgen Klopp went for experience and strength in his starting lineup, with both Sadio Mane and Mohamed Salah back in for the first time since AFCON for a match that was always going to be difficult.

But despite Liverpool’s strong options in the squad, their bottom-of-the-table opponents had by far the superior chances in the opening half.

Indeed, Liverpool had Alisson to thank for being all-square when Fabinho opened the scoring, the ‘keeper making a good save to smother Jay Rodriguez, while also being alert when a ball over the top saw Burnley get in behind.

Such balls over the top caused all sorts of problems in the wet, windy, very Burney-like conditions. Wout Weghorst twice fluffed his lines when in behind and the home side should really have been ahead before Liverpool went down the other end and scored the opener shortly before the interval.

Thankfully, Fabinho was alert and reacted to tap in from close range after his first effort off a corner was saved – the Brazilian’s fifth goal in seven games!

The second half continued in a similar pattern, with Burnley causing problems in the difficult conditions. But Liverpool did exert more control over proceedings.

Liverpool’s strong squad was evidenced by the introduction of Thiago and Jota in the second half, for the returning Jordan Henderson and Mane respectively.

Virgil van Dijk and Joel Matip had to deal with plenty of balls into the box; it was all very typical Burnley away.

The closest the Reds came to doubling the lead was when Alexander-Arnold ended up inside the box and his hooked cross was almost diverted into his own goal by Ben Mee.

Burnley ran out of ideas and energy, and Liverpool were able to see the game out.

It wasn’t pretty, but that doesn’t matter. Three points is all that matters, especially in these types of fixtures. Job done.

Next up it’s a return to European action, with a trip to Milan to face Inter on Wednesday night.