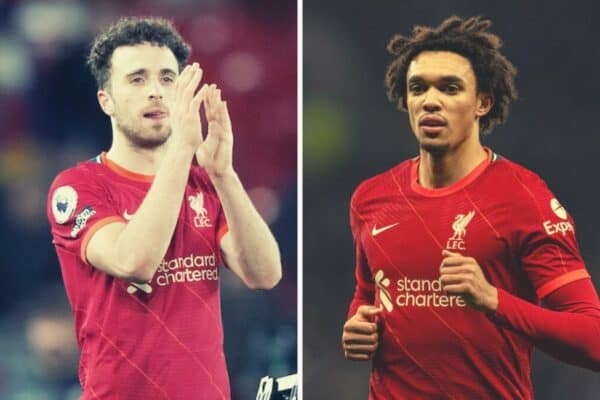 Trent Alexander-Arnold became the fourth-youngest Liverpool player to reach 150 top-flight appearances for the club on Thursday, while Diogo Jota made it 30 from 60.

Jurgen Klopp‘s Reds were again back at Anfield and the result was the same, with a 2-0 victory over Leicester ensuring a flicker of hope for a title race remained.

Jota was the man of the moment once more, with his nous to be in the right place at the right time twice seeing him find the back of the net to take his season’s tally to 17.

It keeps Liverpool within nine points of Man City with a game in hand and it’s all the Reds can do at this stage, keep the pressure on.

There were a number of positives to emerge from the night and here are x key stats from the latest win.

You forget how young Trent is!

The right-back has been a regular member of Klopp’s side since 2017/18 and has grown year on year to a degree where you can forget that he is still only a 23-year-old.

And on Thursday, Alexander-Arnold marked his 150th league appearance for Liverpool – more than five years after his Premier League bow.

In reaching the milestone, he became the club’s fourth-youngest player to hit 150 top-flight appearances in history, ahead of Steven Gerrard, Tommy Smith and Phil Thompson – according to Opta’s Michael Reid.

It’s been a mesmerising journey, laying on 43 league assists in that time – a return that already has him placed 62nd in the Premier League‘s all-time charts.

He is Liverpool’s man in form, with five goals in his last four appearances to take his tally to 17 with more than three months left in the season.

In the bigger picture, his return for the club now stands at 30 in just 60 appearances, seeing him join an illustrious list of goalscorers to do similar.

Not bad company to keep!

But they all cannot attest to also proving a good luck charm, as, according to OptaJoe, in the games that Jota has scored, Liverpool have never gone on to lose (W25, D5).

30 – The most games scored in without losing in Premier League history:

So the recipe for success is simple, right? Get him on the scoresheet in every game!

And a word for Fabinho

Liverpool were rarely troubled by Leicester with Alisson almost having a night off because of it, but it was largely due to the work of Fabinho further up the pitch.

The Brazilian, on return after missing Cardiff’s visit, was at his Inspector Gadget best, pickpocketing the Foxes seemingly at every turn.

And, in fact, according to Squawka, he made seven interceptions against Brendan Rodgers’ side – the most of any player in a top-flight game this season.

Fabinho made seven interceptions against Leicester, the most by a player in a Premier League game this season.

Shields the defence so well. ? pic.twitter.com/mvSQMYEGus

He’s not called the ‘lighthouse’ for no reason!