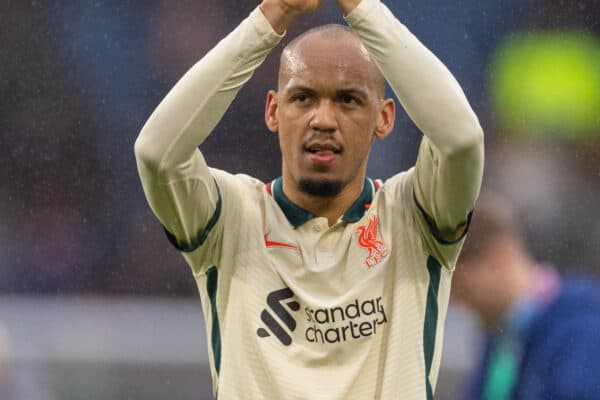 An ongoing theme throughout Liverpool’s 1-0 win over Burnley was how successful their high line was, with Fabinho baffled by claims the Clarets had “a lot of chances.”

The Reds found themselves up against a game Burnley side on Sunday afternoon, with the introduction of new striker Wout Weghorst giving them more confidence in attack.

But though they may have broken through more often than expected at Turf Moor, the majority of their chances came with players offside, the Clarets flagged seven times over the 90 minutes.

Only Watford and Arsenal (both eight) have been caught offside more times in a single game against Liverpool this season, with Jurgen Klopp‘s high line giving assistant referees a busier time than usual.

However, it seems as though those ‘chances’ that came from offside positions warped perceptions of the game, as many believed Burnley were more dangerous than perhaps they were.

That was put to the match-winner Fabinho in his post-match interview with DAZN, and the Brazilian’s reaction said it all.

Fabinho's answer when he was asked about Burnley's chances against Liverpool is just priceless ? pic.twitter.com/wMQmKWF8I5

“Yeah? No, not really. A couple!” he replied, with a bemused look.

It is a sentiment Klopp shared as he held his press conference after the win, with the manager suggesting that late offside calls made it seem like Burnley were more of a threat.

“I think it felt that they had more moments than they actually had, because of the late offside flag,” he told reporters.

“There were a lot of situations where we defended them really well then the flag came late, or if Ali made a save he didn’t even put the flag up anymore.

“So it looked really crazy. But that’s the way it is.”