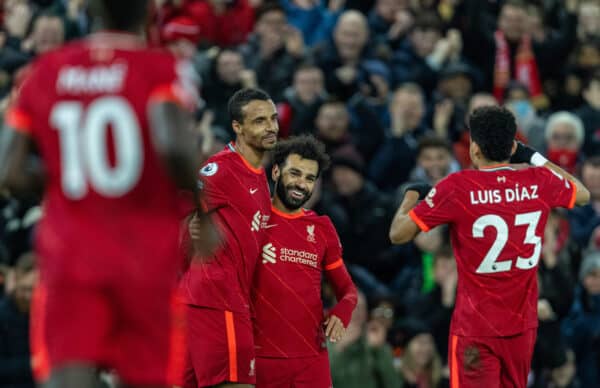 Liverpool finally played their game in hand and walloped Leeds out of sight in the first half to make it just a three-point gap at the top of the table.

In the XI, out of the squad entirely, back in the XI. It has been a strange period of time for Curtis Jones but he was thrown back into the team by Jurgen Klopp as the biggest curiosity of the line-up.

There can’t really be any doubt that Jones himself was looking to seize this opportunity: he was a lot more aggressive, energetic and forward-thinking on the ball in this game than he had been previously – though in part that would come as a result of being the right No. 8 rather than the more conservative left-sided one.

He was wayward with a few passes, true, but most of those saw him then race back and make the decisive tackle to regain possession. At other times, he was the biggest catalyst to some speeded-up attacking play, combining nicely with Salah in particular.

Just past the hour mark he could have scored, but tried to tee up Salah for his hat-trick instead – that should have been an assist.

He won’t be in the weekend XI you’d imagine, but he might have edged himself back into the bench picks.

Subs with the final in mind?

Henderson on for Thiago.

Milner on for Jones.

Origi on for Diaz.

The first sub, in particular, felt very much like the boss was prepping for Wembley, keeping Thiago ticking but not overloading his minutes given injury issues earlier in the campaign, which Klopp said is all about trying “to find the right intensity for him.”

While the skipper started at the weekend and has also needed to not play every minute of every game these days.

Given that careful management, it would be absolutely no surprise to see them both start against Chelsea – either side of Fabinho.

Origi’s late arrival also points to the ongoing uncertainty over whether Jota or Firmino will be available to play.

Jurgen might say it’s just one game at a time, but we can certainly see differently from time to time.

One of them was always going to result in a brilliant goal, wasn’t it?!

After what feels like 500 solo runs from our wind-up merchant at centre-back, he of the long-limbed tantrums and the overly-firm slaps of the head, Joel Matip finally found the back of the net at the end of his latest one.

This time it was a swooping surge from 40 yards out or more, a 20-metre one-two with Salah and a finish as well-taken and composed as any you’ll see from the front three, first-time and curled near post above the keeper’s reach.

The acclaim and applause he received from team-mates and fans alike spoke volumes not just of his popularity, but of his cult-status in this particular trait too.

Defensively this was his best game in a while too – so is he in for the League Cup final, or is it Konate to return?!

Obviously, we’re more concerned with points at this stage, and there, Man City still lead. But it’s clear the league table will be incredibly close this season and there’s a reasonable chance that goal difference might come into it at some stage.

Good job we have Mo Salah, then.

The No. 11 rattled in two penalties and assisted Matip’s beauty – he now has (at least) 10 goals and 10 assists in a season for the third time for the Reds, with only four players managing to do so before for the Reds once in the Premier League era.

A six-goal margin of victory here put the Reds onto +50 for the season, four ahead of Man City after our six-game win streak recently added 18 to that tally – late props to Sadio Mane for adding his own brace, of course.

Now just the three-point gap to close up, too!

Every game’s a final!

We’ve already had a few teams (hi Newcastle) say that every game from this point onwards is like a final as they try to achieve their various objectives for the season.

Next up for the Reds: an actual final. But you can kind of see the point of the cliche too with the upcoming run: two knock-out games and another big league fixture – there’s no room for slip-ups and any defeat does feel like losing a shot at silverware.

The squad is looking great right now – lots of competition in key areas, plenty of stars in top form and so, so much to aim for over the next three months.

Let’s start the trophy-winning again at the weekend and see just how memorable this season could become.