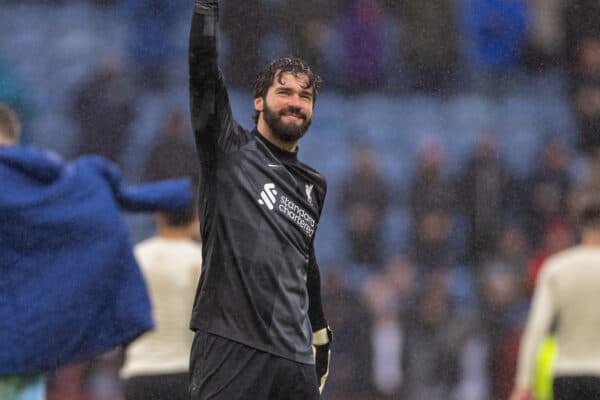 Jurgen Klopp is presiding over the strongest squad of his time at Liverpool, but despite the wealth of talent in attack, it was the spine that survived the trip to Burnley.

Turf Moor is a rustic old place, set within the backdrop of the hills of East Lancashire.

Generous and unforgiving in equal measure, it doesn’t matter if the team who resides there is rooted to the foot of the Premier League table or threatening European qualification, it’s always worth being aware of what we’re getting ourselves into whenever we visit, even when we have won on there on our last four trips.

Arriving within a peculiar aura of that of a team enjoying a rare clean bill of health, you couldn’t help but have a warm glow of happiness at the team Jurgen Klopp named for this one, and perhaps more so about the cast of substitutes he had at his disposal.

That team, that bench.

For too long, we could only imagine a world where Klopp could take a glance over his shoulder for a plan B and see talent such as Thiago, Diogo Jota, Luis Diaz and Harvey Elliott, among other compelling options.

Having welcomed home Mohamed Salah last time around, this one was boosted by the return of Sadio Mane, fresh from Africa Cup of Nations glory. Everything was teed up for a blizzard of aesthetically perfect football and a winning margin of immense proportions.

This was Burnley, though, and it doesn’t always work that way with Burnley.

Especially on a day when Turf Moor was enshrouded in a mad set of weather that made for conditions that were akin to a Saturday morning park game in the middle of autumn.

In the buildup to Fabinho procuring the only goal of the game, Trent Alexander-Arnold had to contend with the ball being blown away from him, and the corner flag leaning across him.

A free-kick should have been given for obstruction, and the flag given a warning over its future conduct for the rest of the afternoon.

It was a goal that kind of came against the flow of the game up until that point, as Burnley had enjoyed a reasonable amount of purchase with the ball over the top of our high defensive line for the gargantuan Wout Weghorst to run on to.

Once Liverpool had edged in front, however, much of Burnley’s optimism of taking something from the game was based upon false momentum, as opportunities that would have been chalked off by VAR as offside were being classed as valid chances.

Not a phenomenon isolated solely to this game, it is a subsidiary side-effect of the dawning of VAR, which creates a warped perspective of events and offers a trailing team an artificial route back into contention.

A player nips through on goal, he is clearly offside, yet the flag stays down; the goalkeeper makes a fine save or the ball narrowly whistles wide.

The crowd is energised, the players are pumped by the belief they are knocking on the door of getting back into the game.

The flag belatedly goes up, which is totally ignored by positive narrative hunters, as the ball and game is swiftly back into motion, while commentators and journalists alike disregard the basic rules of the sport, and the concept that any goal from such circumstances would have been overturned by VAR.

It is a modern football oddity.

Not everyone buys into it, though. When challenged by post-match reporters that Burnley had had a lot of chances, Fabinho’s facial expression said it all.

Generally, Burnley were up for the challenge, refreshed as they were by going to Old Trafford and taking a point, something that will be cast as the foundation for them dragging themselves away from relegation, should they eventually end the season in 17th position or higher.

If they approach their remaining games as they did Sunday’s, then they will have a chance.

What facilitated Liverpool’s victory was the strength of their spine. Alisson was onto every task asked of him, to the point that he seemed to be deployed just behind the back four for a significant part of the game, rather than in goal.

Added to this, Virgil van Dijk and Joel Matip were calmness personified; in the case of Van Dijk, the coolest man in football, it really is like having a central defensive version of Samuel L. Jackson, while Matip truly is the Bobby Firmino of central defenders, full of esoteric vision, an eye for the absurd, confidence galore, and a penchant for occasional misadventure.

Then there was Fabinho, the free-scoring defensive midfielder.

We are blessed, and this is the spine that ensures we aren’t mugged off on days when we are making those awkward visits to the hills of East Lancashire, days when the artists of the side are invited down a series of cul-de-sacs.

Ugly wins can be therapeutic, and hugely valuable.

Now we cast our eye to the Champions League and a return to the San Siro, this time to take on an Internazionale side that has stumbled through the last couple of weeks, after a fine run of form.

I’m sure they will give us a game, but it might be one that we are more at ease with than the one at Burnley.