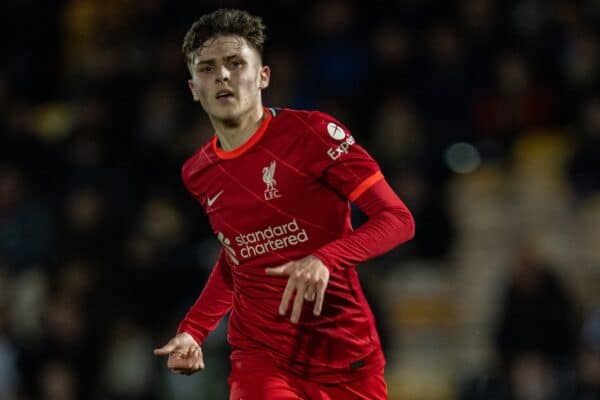 Liverpool have rewarded summer signing Bobby Clark‘s progress with his first professional contract, with the deal announced days after his 17th birthday.

Clark, who joined the Reds from Newcastle in August, turned 17 earlier this week, and was therefore eligible to turn his scholarship into a professional contract.

The club have moved swiftly to do so, with the formality confirmed on Friday afternoon as the youngster put pen to paper on terms expected to tie him to Anfield until 2025.

It marks the next step in an impressive start to life on Merseyside, with Clark immediately taking up duties as a key player with the under-18s upon his arrival, as well as debuting for the under-23s and training with the first team.

A versatile talent, Clark is capable of playing in midfield and out wide, and has already scored four times and laid on three assists in 12 games in the U18 Premier League.

He could join the senior squad for pre-season training in the summer, according to assistant manager Pepijn Lijnders, with there a clear belief among Jurgen Klopp‘s staff in a player signed for a fee of up to £1.5 million.

“I hope they come with us to pre-season, because that’s really important, that they first come to a proper pre-season, four, five weeks of training with us, to know exactly how we want to do things.”

They will remain patient with Clark, son of former Newcastle midfielder Lee Clark, but there is a clear pathway to the first team for those who stand out at academy level.

A first professional contract is no guarantee of following the likes of Harvey Elliott and Kaide Gordon in making a swift rise after joining from another English club, but it does represent a step closer towards doing so.