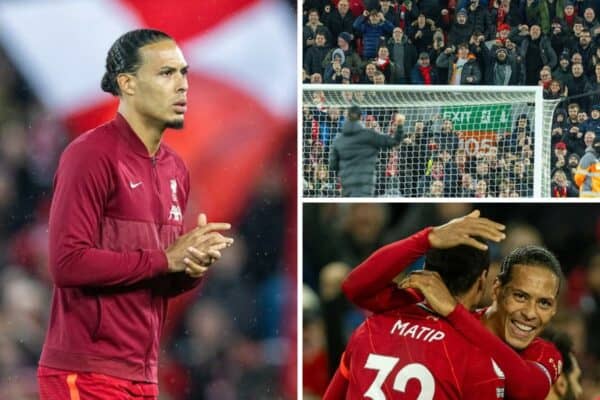 The Reds were at their ruthless best having put six unanswered goals beyond Leeds, with Jurgen Klopp‘s post-match celebrations showing just how important the victory was.

Liverpool needed to win and they did just that, with two goals apiece from Mohamed Salah and Sadio Mane coupled with Virgil van Dijk and Joel Matip each finding the net.

It was the latter who delivered one of the moments of the game, of which there were plenty on an Anfield night that truly emphasised Liverpool’s intentions for the remainder of the season.

It acts as another valuable boost with the League Cup final now only days away.

Here, This Is Anfield’s Joanna Durkan (@JoannaDurkan_) is joined Ben Kelly (@bkelly776, who was at Anfield, and Lewis Bower (@LewisBower2021) to delve into all the positives from the win and that Klopp celebration.

There was so much to love about that game…

BEN: I think it’s going to be a highlight for everyone – but it was great to finally see Matip get that ‘I’m going on an adventure’ goal!

He’d had a wander forward a few minutes previously and it hadn’t worked out, but he did well to recognise on the second time that he could continue his run without being tracked- and what a finish!

What I also loved about it was Virgil running the length of the pitch to congratulate him – obviously, they’ve been talking about it off the pitch and there’s possibly a bit of awareness of how much the whole fanbase wanted him to score that. It was brilliant!

JOANNA: It was a real treat, wasn’t it! You could not help but just let out a joyous laugh when it finally went into the back of the net, we’ve all dreamt of the day.

And what a finish too, first time and over Meslier with consummate ease, and the celebrations after were brilliant – goes to show how highly he is regarded within the group and fanbase.

BEN: I also thought Diaz was a joy to watch again, particularly in the first half. The boy just has raw pace. He’s so exciting to watch, he does remind me of Mane when he first arrived, with the whole ‘bursting onto the scene’ vibe. I’d love to see him start on Sunday, and make the most of that big Wembley pitch.

LEWIS: Aside from the goals, including Matip breaking his adventurous running duck that you guys mention, the statistics have been bandied around Twitter.

The midfield axis formed by Thiago and Fabinho provides the perfect blend of steely compactness, bite and tenacity but has an air of Joga Bonito around it. Whoever slots in, this time a good showing from Curtis Jones, has the pleasure of being able to receive the ball anywhere on the pitch due to the technical ability of the pair when progressing the ball.

We have even seen a more adventurous Fabinho this season! 19 games for the pair. 18 wins. One draw.

JOANNA: Can definitely get on board with those positives, of which there are so many from that rout.

What pleased me most was, aside from finding our feet in the first 15 minutes, there was no sign of trepidation or nerves from what was a must-win game after the door was left ajar by City.

Liverpool went up a gear when needed to and flexed their muscles, the team is just brimming with confidence from back to front and it is a joy to behold. These are special times.

Klopp really went for it at the end with his celebration, what did you make of the message it sent?

BEN: I often shoot off right on the final whistle when I’m at the game, but I purposefully stayed to see Klopp’s antics after the match, and it was worth it. He just inspires everyone in the ground.

There was a time in early January where thinking we could still win the league would probably seemed like signs of mental illness, but the players wouldn’t have given up. Klopp wouldn’t have either. That celebration told everyone it is ON. It told us “let’s win Sunday, let’s finish the job against Inter, and let’s go and win this league”.

It was a huge statement win. The game in hand came at the perfect time after City losing on Saturday, and to put six past Leeds means the momentum is truly with us now. Let’s take that into Sunday and see what happens next.

LEWIS: The race is on. Not just for the Premier League, but everything. The lot. The club are casting a big net this season and Klopp is hungry.

Not quite reinvigorated, but perhaps the injury crisis last season with Covid restrictions still looming squeezed a bit too much of a toll on staff and players.

Synergy. The fans, the players, the staff from top to bottom are moving together and beating as one. And Liverpool will need that if ambitions are to be matched this season. It could be special, and Klopp knows it. Like Ben said, perhaps a ‘be ready for Sunday’ message.

The best fist pumps yet! Jurgen enjoyed that! pic.twitter.com/XQ5Llj1ZOw

JOANNA: Not three, but eight fist pumps! That was a man who knows what the result meant, that the chase is on and that he nor his side will be letting up.

It was unrestrained passion and although he said if he had ten more seconds to think about it he mightn’t have been as boisterous, it was a window into his psyche.

His players will feed off it, as too the fans and with four trophies still very much in reach – be in no doubt over just how fired up Liverpool are. A statement was made, now for another on Sunday!

What would your League Cup final XI?

That is Mane down the middle on the presumption Jota and Firmino are not fit. It’s hard to imagine Klopp wouldn’t select Henderson for a cup final and it would probably be the correct decision.

Konate’s robustness may well be more suited to dealing with Chelsea’s more agile forwards, Pulisic, Werner, Havertz. I think Kelleher will start but I’m a firm believer in the removal of sentiment and in a final, giving the club the best chance to win.

I think Alisson does that, although, I certainly won’t be worried if Kelleher does start. He has been fantastic.

BEN: I think the XI picks itself. Personally, like Lewis, I would play Alisson, but Klopp has already confirmed it would be Kelleher, so I can’t begrudge him that.

Before the Leeds win, I had Konate in, but I’ve swayed towards Matip after the goal, and he deserves to start I think. Henderson was rested, he’s nailed on to start if he avoids a knock over the next few days in training.

Thiago is integral, not only for Sunday but for the rest of our season. He provides a level of control in midfield that is vital if we’re going to win some trophies. In the front three, I would be starting Jota but I think he’s only going to be fit for the bench at best, so let’s go with the same three who started against Leeds. Bring it on!

JOANNA: I’m in agreeance with the guys over the Alisson-Kelleher debate, if it was down to me it would be the Brazilian, but that doesn’t mean I’m concerned in the slightest if it isn’t.

Kelleher has earned his big day and few, if any, will be a jumble of nerves with his selection.

The rest of the team all but picks itself as already mentioned, with the decision between Konate and Matip the only other conundrum – and I’ve been leaning the Frenchman’s way over the week.

It’s a strong enough side to get the job done and there will be adequate options off the bench and Klopp and his team have shown a real knack for nailing the changes in recent games. Bring it, home lads!