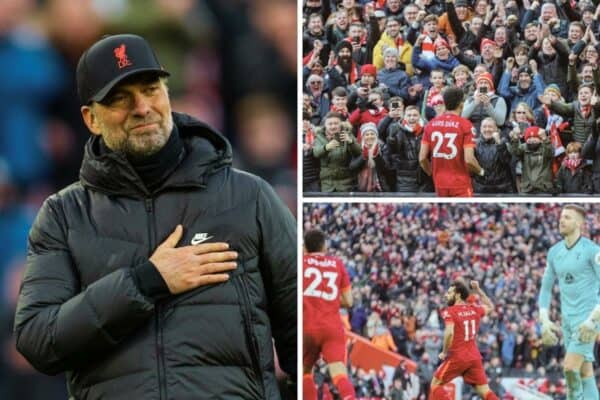 It was a day where none of the front three were left out with Sadio Mane, Mohamed Salah and Luis Diaz all finding the net to guide Liverpool to a 3-1 win against Norwich.

It was not the straightforward encounter many had expected with Dean Smith’s side holding their own against the Reds to force them to come back from a goal behind.

Joel Matip‘s outstretched leg was to thank for that but with timely changes from the bench once more, in space of three minutes, Liverpool were in the lead.

And it all started with Mane perfecting the bicycle kick he had earnestly attempted twice at the San Siro, but there was no misfiring this time around!

Just minutes later and the ball was in Alisson‘s hands and sent straight into the path of Salah, rekindling the magic from that very special season.

But just as it looked as though the No. 11 had seen the moment pass him by, it rolled into the back of the net thanks to his poise and awareness.

His 150th goal for the club in 233 games, making him the 10th player to reach the milestone in Liverpool’s history.

It was then Diaz’s turn after Jordan Henderson threaded the needle for the No. 23 to finish in kind, sliding to the corner flag and taking in Anfield’s adulation.

There’s nothing quite like scoring your first goal for the Reds.

Having safely come from behind, there were plenty of smiles and hugs to go around.

But let’s not forget those Klopp fist pumps!

Another game down and another three points in the bank, now for Leeds in midweek before the cup final in eight days’ time.