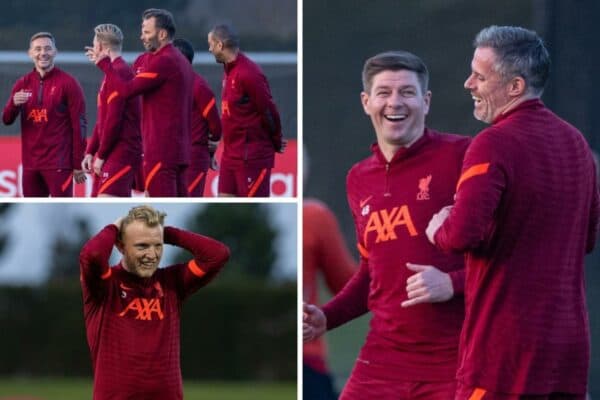 Gerrard and Carragher thick as thieves as Liverpool Legends reunite

It was a welcome blast from the past as Liverpool’s legends reunited ahead of their charity match against Barcelona at Anfield on Saturday, with Steven Gerrard and Jamie Carragher back in red.

It’s a chance to turn back the clock, dust off the old songbook and celebrate those who donned the Liverpbird in years gone by.

The Liverpool Legends game is always a joyful occasion and that was certainly the case as the squad got together at Kirkby on Friday in preparation for their meeting with Barcelona’s legends at 3pm.

For many, it will have been the first time at the new training base following the switch from Melwood in November 2020 and they certainly enjoyed their afternoon!

The likes of Maxi Rodriguez, Patrik Berger, Sami Hyypia, Stewart Downing, Dirk Kuyt and Vladimir Smicer were put through their paces, as were Jason McAteer and Steve McManaman.

The Liverpool training kit fit a little differently on some compared to others but it was nostalgia we are not complaining about.

And Gerrard and Carragher certainly created that in abundance as they snickered together just as they always did at Melwood.

And the former No. 23, was on hand for a quick reaction on social media:

When you stop playing for @LFC then get the kit back on! pic.twitter.com/2iKv6gOeRz

A spot of training had some blowing up earlier than others, but Steven Gerrard looks like he could still do the job.

And how good is it to see these two fan favourites!

Competitiveness was still very much in the air throughout their drills and seven-a-side matches and Carragher remained the loudest on the pitch. Nice to see not much has changed.

With Daniel Agger, Luis Garcia, Milan Baros, Jerzy Dudek and Sander Westerveld to also be involved and overseen by the management duo of Sir Kenny Dalglish and Ian Rush, it’s going to be a day to remember.

* You can watch Liverpool Legends vs. Barcelona Legends live here with a virtual ticket, kickoff at Anfield is at 3pm (GMT).